Is there a standard (advanced?) stat in basketball for measuring player "consistency"?

Is there an accepted stat that analysts use to measure how consistent a basketball player is?

Take points per game (or points per 48 min): two players with the same average scoring rates could have very different game distributions. Of course standard deviation comes right to mind (after you standardize it to account for high vs low scorers), and it makes sense when I try it.

So I wonder if consistency is a "thing of interest" in sports analytics, and if so how pro analysts handle questions such as those.

Thanks in advance for any insights!

I initially didn't post an answer because Per 36 isn't widely accepted as a useful stat.

In short, "Per 36 Minutes" normalizes production. Chris "Birdman" Andersen typically had respectable Per 36 numbers (averages a double-double), but never averaged 36 minutes per game (ostensibly due to lack of stamina or being best used sparingly). Beware that this stat also shows things like "12 fouls Per 36" because the player administered two fouls in six minutes of play.

However, Per 36 can be used to convey consistency. Tim Duncan is the poster child for consistency, especially based on Per 36. Here is a graph from 2013 to demonstrate season percent differential from career Per 36 (credit to C-Itz of Flickr): 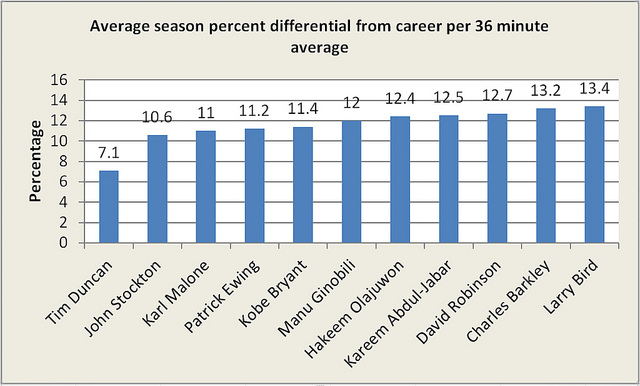 As you can see, Tim Duncan is far and away the most consistent player when considering his first ~15 seasons. Compared to Andersen's 17.7 MPG, I am much more comfortable with Duncan's 34 MPG as a more accurate measure of Per 36 consistency.

6
Looking for an objective crybaby metric... Are there any NBA "complainer" statistics?
3
College basketball player, declares for the NBA draft, does not get a contract
2
Is there a stat for number of missed "open look" shots in an NBA basketball game?
3
Is there a "player of the year" award for international basketball?
7
Can a basketball player play in college after playing in the NBA?
1
Player termination with basketball agent
3
Why isn't there an advantage rule for fouls in basketball (similar to soccer)?
1
Can you use an opponent for leverage in basketball?