In our 7 vs 7 league, we employ a form of zonal and man marking that is formed out of necessity; during free-kicks or corners we have a man-to-man marking that has been both successful and unsuccessful depending on the opposition. For the rest of the game each player knows their position and move around it, the most flexibility that we have is to move up and down the pitch.

From this question on improving our formation and strategy, there were some responses to have a fluid/team attacking and defending effort, and I have to say that when we could enforce this, the team was very strong. However, for some reason we couldn't do it at all the games.

I am also generally curious about how man-to-man and zonal marking systems work and what the recent strategies are within the professional teams.

In this web-site regarding football tactics there is little bit of information regarding both defensive systems, and I especially like this part on zonal marking:

...every defender and midfielder is given a particular zone on the pitch to cover when the opposition has the ball. This is particularly important during set pieces, but does rely heavily on every player fulfilling their duties and keeping their concentration.

Ideally, the opposition will be facing two lines of four players covering the entirety of one half of the pitch. 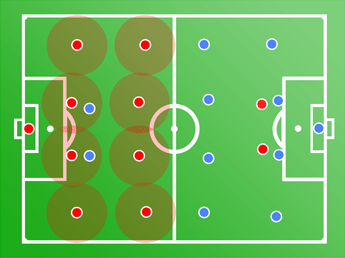 As I understand, man-to-man marking is more dependent on the players and the opposition but frankly, we don't have the time to analyze opposition players too much.

I am hoping to suggest this mixed marking to my team and I would like to get some opinions/references on it.

Zone- vs man-marking is a common dilemma in many sports. I have come across it in both basketball and football. If one puts aside the fundamental differences of these two sports, tactically-speaking the idea is roughly the same: In zone marking your are given a portion of the field you're responsible marking/defending. In man-marking however you are given an opponent which you are responsible for shutting down.

In basketball the biggest threat to zone defense is passing the ball around, until you find one player open on the outside (since the defenders will not push up to their opponents but rather cover the area inside the 3-point line) and sink the long shots. The analogy in football is perhaps not as clear, but essentially the idea is the same. The defenders are link soldier ants who're given parts of the hive to protect. When an attacker comes within the proximity of the defender's zone, the defender gets engaged; will follow the opponent making sure the opponent doesn't get much chance to do something. For the attacking team, the strategy is then to "drag" defenders out of position. If successful this will result in gaps in the defensive formation which can be exploited by through passes or diagonal crosses. In professional football this happens usually in the form of a diagonal cross behind the reverse full back (see graph below) 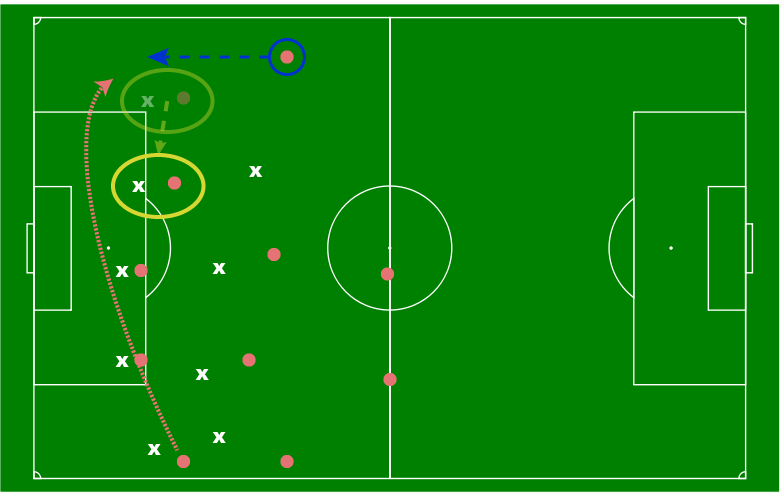 By dragging his defender down (in yellow), the winger opens up the zone (faded yellow), now unmarked, for his full back support (in blue). If caught unaware the defending full-back will be off balance, rush off to the advancing full back of the attacking team, leaving behind at least one unmarked player. Notice how the midfielders in the attacking team are also concentrated on one side of the pitch, dragging their defenders with them. They are still playable thus dangerous, but the real trick is the fact that the other wing is pretty much open. Essentially the player responsible for this to not happen is the outer midfielder who's in control of his zone, but doing no-good in terms of defense.

Team-work is crucial for this type of schemes to work. The defending team has to communicate continuously to warn one another for such runs, and opened up areas. Likewise if the attacker is attempting to take runs, the defenders should be aware of if/when to switch responsibility for a player. Alternatively (for CBs) they might switch zones, in pursuit of an attacker.

Regarding your other question: "Can you mix man-marking and zone-marking?" Well yes, zone marking works up until the attacker is in your face advancing towards the goal, then you'll need to stick with the opponent until the situation is resolved (shot is taken, ball is cleared etc..) Furthermore, if the attacking team is playing with a single forward, then the CBs might choose to employ a strategy where one of them play tight man-marking on the attacker, while the other plays more zonal. The motivation behind this could be, a better physical match between the defender and the attacker, or employing an older and experienced CB with a younger but athletic CB.

I hope this makes some sense :)

Not the answer you're looking for? Browse other questions tagged football strategy formations tactics defense or ask your own question.

11
Improving 7 vs 7 team and strategy

11
Improving 7 vs 7 team and strategy
12
Do teams announce their exact formations before a match?
7
Do football teams have to do their best to win?
7
What happens if a team walks off the field during a football match?
2
What is an advanced area in football (soccer) field?
3
Why are WR in the slot covered by non-CBs in American football?
4
Sign stealing in baseball
5
Why do curlers blank on purpose?
3
Why do only the NBA teams that are already up start pressing at the end of the game?