Is carrying a player into touch a legal defense?

I recently saw this snippet of a two defenders carrying an opponent into touch as he was holding onto the ball. 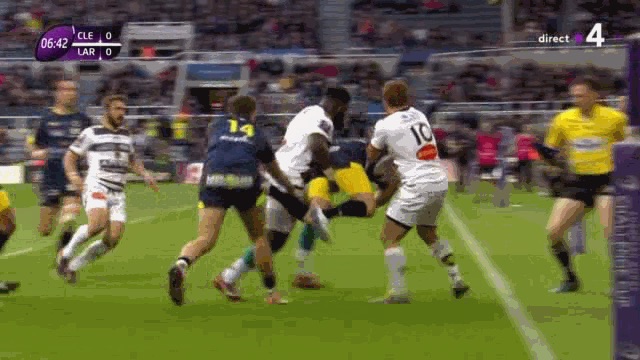 So I looked into tackle laws:

REQUIREMENTS FOR A TACKLE (https://laws.worldrugby.org/?law=14&language=EN)

This means it should be a maul (if called by the referee).

But since the maul is moving sideways, this would be illegal, to my understanding (but I am unsure).

My question, was this defense legal?

Short answer:
Yes, this is legal.
No, it's not a maul (and it wouldn't matter if it were).

Tackle?
The requirements that you've listed are the conditions under which an attempted tackle becomes a completed tackle.

When you attempt to tackle someone, you're required to do so safely but it's not a requirement that you do so successfully - otherwise missing a tackle would be illegal.
The rules you've listed above aren't there to say that it's the right way to tackle, they're there to say that when when these conditions are met then the tackle is over and a new set of rules apply to both players (ball-carrier must release the ball, tackler must release the player and roll away).

In the scenario you've shown what's effectively happening is that a tackle is being attempted but play ends before the tackle is completed. At this point, what is/isn't a tackle becomes irrelevant.

Picking up a player?

Legal, provided that the tackler returns the ball-carrier to ground safely.
(edit: after taking another look at the clip, the tackler could be deemed to have broken the rules here by just throwing the player to the ground. It's a marginal case but if the ref thought it was fine, then it was fine)

Not a maul?
As you've listed above, a maul "consists of a ball-carrier and at least one player from each team". As there's no other player from the ball-carriers team then this can't be a maul.

None of the maul conditions make this an "an illegal defence". In all these scenarios, the onus is on the ball-carrying team to keep the ball playable and they lose possession if they can't. How could it be an illegal defence if it's the other team that's breaking the rules?

Not the answer you're looking for? Browse other questions tagged rules rugby-union rugby or ask your own question.

10
On a no ball, can both batsmen carry the stumps and run forever?
2
Rugby penalty kick into touch-in-goal
4
Collapsing of a Maul if the Maul isn't actually formed
3
Hockey offsides: reconciling the definition of the zone with the tagging up rule
5
Legal throwins at lineouts
2
Are these two NFL rules overlapping?
4
does steal count as first bounce?
1
What's going on in a Rugby Union “choke tackle”?
1
Must a catch be taken cleanly to win a mark?