Why do referees suddenly care so much whether or not the goalkeeper has a foot on the goal line during a penalty kick?

During the Women's World Cup 2019, the Nigerian goalkeeper defended a penalty kick in the 75th minute only for it to be retaken due to the fact that she did not have a foot on the goal line as the shot was taken. Due to this, France went on to retake the penalty, score a goal, and win the match.

Nevertheless, last year, during the Denmark versus Croatia game, in the second half of extra time, Denmark's goalkeeper Kasper Schmeichel defended a penalty against Luka Modrić. And yet, if we see this image it's pretty obvious that the goalkeeper does not have a single foot on the goal line. 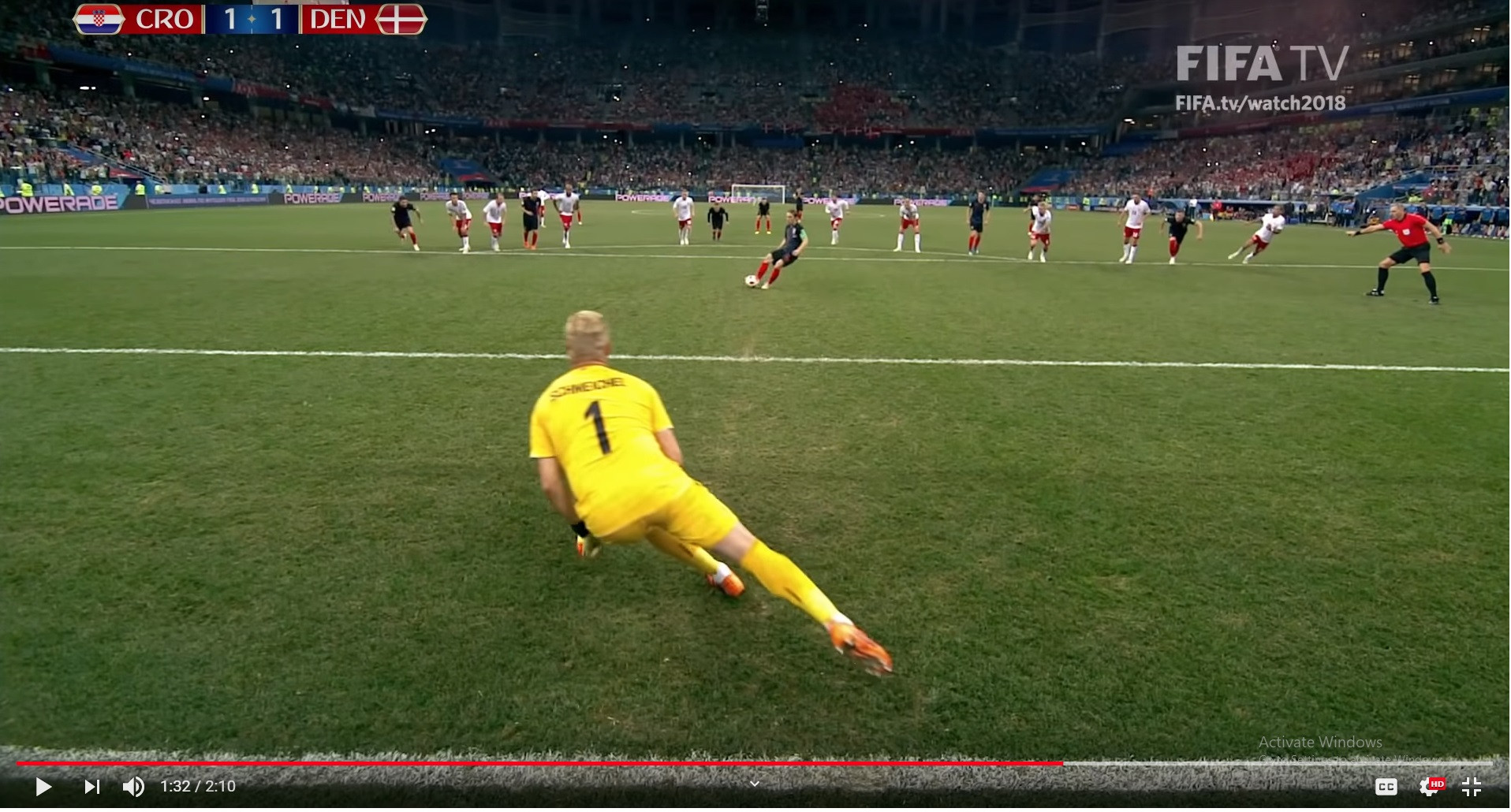 Shouldn't the penalty be retaken?
Why did nothing happen here?
And why are the referees so adamant about this rule in the Women's World Cup?

As it is still a new technology, referees are unsure of the extent they should review decisions. In the past, when VAR was not used, referees were free of blame (to some extent) as the decision had to be made on the spot. However, as they are now allowed to review any major decision, they are now being criticized for not using it enough.

2018 World cup was the first major tournament with VAR active, the referee, Nestor Pitana, was obviously not used to it yet

In short: The rulebook has changed since the World Cup was played.

This years Women's World Cup is being played under the 2019/20 Laws of the Game which have some significant changes from the previous 2018/19 edition.

The goalkeeper must have at least part of one foot on/in-line with the goal line when the kick is taken.

Not the answer you're looking for? Browse other questions tagged rules football officiating penalty-shot goalkeeper or ask your own question.

10
Hasn't Kasper Schmeichel broke the rules when saving Modrić's penalty during the World Cup 2018, Round of 16 match between Croatia and Denmark?
9
How detailed is penalty kick encroachment in football
8
What is the distance allowed for the goalkeeper to be off the line during penalty kick?

7
Are you allowed to score a goal off the ground with your head to showboat?
15
Why did Manuel Neuer leave the goal post and come to the midfield position in group qualifiers?
5
Consequences outside the game for grievous fouls in football?
10
Hasn't Kasper Schmeichel broke the rules when saving Modrić's penalty during the World Cup 2018, Round of 16 match between Croatia and Denmark?
5
Does VAR allow referees to ignore unintentional fouls?
4
Should Jorgensen have been sent off for his DOGSO foul in Croatia-Denmark (2018 FIFA World Cup)?
11
Can a goalkeeper chip the ball to the head of a teammate from a goal kick to circumvent the backpass restriction?