I found this from Cricbuzz and other popular sports site.

I don't understand that last sentence which is "If Pakistan bowl first, they will be out of the semi-final race even before the first ball is bowled at Lord's on Friday.".

Why they can't limit Bangladesh for around 300 runs and make it using just 20 overs or something doesn't qualify for semi, even Pakistan can beat Bangladesh by 311 runs after posting 350 make them semi-final?

For Pakistan to qualify to the semi-final...

Pakistan to beat Bangladesh by 311 runs after posting 350

beat Bangladesh by 316 runs after scoring 400

beat Bangladesh by 321 runs after scoring 450

If Pakistan bowl first, they will be out of the semi-final race even before the first ball is bowled at Lord's on Friday. 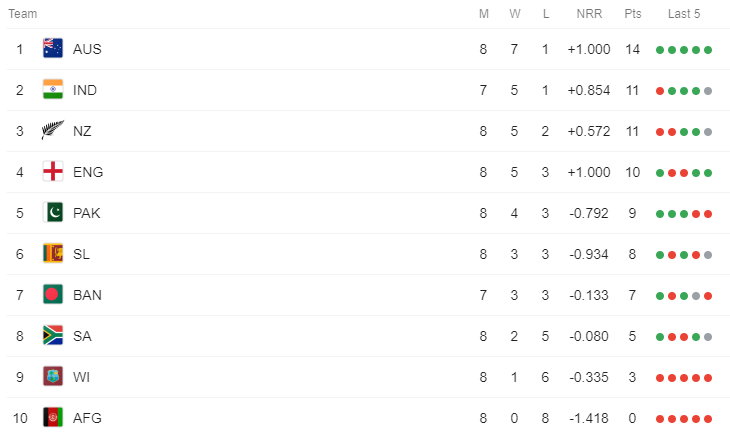 Before the Bangladesh match, Pakistan have scored 1710 runs from 338.5 overs and conceded 2073 runs from 303.4 overs. Even given a very unlikely scenario:

Pakistan's numbers will now be 1711 runs from 338.5 for, and 2073 runs from 353.4 overs against (all out always counts as the full allocation of overs); this gives them a net run rate of 0.036, still less than New Zealand's 0.175 (the table in the question doesn't include New Zealand's loss to England which significantly reduced their NRR).

There is in theory a scenario in which Pakistan can qualify if Bangladesh bat first, but it's so ridiculously stupid that the ICC would definitely get involved:

Pakistan needs to beat Bangladesh with much more than 300 balls to spare. That is why if Bangladesh chooses to bat first, they cannot qualify as the maximum number of balls is 300.

Not the answer you're looking for? Browse other questions tagged cricket cricket-world-cup qualifying or ask your own question.

5
How Pakistan will qualify for semi finals in world cup 2019?

4
How many hours does a World Cup Cricket match usually last?
6
Why do bowlers go so near the crease?
8
Why Cricket world cup played in 1999 (England) instead of 2000?
1
Would Ireland qualify for the 2019 Cricket World Cup if their game against Afghanistan ended in a tie?
0
What would happen in a tie in a Cricket World Cup final?
4
Why did the Indian team change their jersey colour in the middle of World Cup 2019?
5
How Pakistan will qualify for semi finals in world cup 2019?
1
How to understand this new phase format table in cricket world cup 2019?
5
In the 2019 Cricket World Cup final, should Guptill's overthrow have resulted in 5 or 6 runs?