Can a goalkeeper chip the ball to the head of a teammate from a goal kick to circumvent the backpass restriction?

If you've been following the 2019 International Champions Cup, you've certainly not missed Benfica's unorthodox goal kick against Milan (clip on Twitter). If you can't see the video, just know the goalkeeper had a defender stay very close to him, so he could flick the ball to his centre-back, who then headed it back to him so he could pick it up with his hands and resume play more easily. 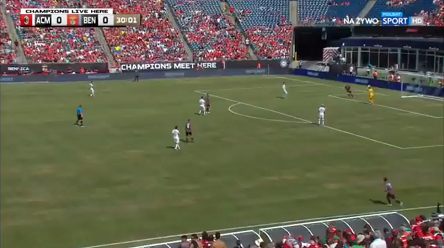 Now, I originally thought this would not be allowed, as Law 12 punished whoever uses a trick to circumvent the backpass rule, and the fact there are two offenders instead of just one shouldn't change anything, especially in a case like this where the intent of circumventing the law is clear as day (Law 12.3).

There are different circumstances when a player must be cautioned for unsporting behaviour including if a player (...) uses a deliberate trick to pass the ball (including from a free kick) to the goalkeeper with the head, chest, knee etc. to circumvent the Law, whether or not the goalkeeper touches the ball with the hands

However, it appears that several people have contacted the IFAB following this situation, and surprisingly enough they have stated this kind of goal kick is legal. But while it's obviously up to them to decide what constitutes unsporting behaviour (so I can't really complain there), what truly puzzles me is their explanation as to why this should be allowed.

According to many people, including Dale Johnson (link to his tweet), the IFAB said this is legal because "[n]o handling backpass Law was designed to prevent time-wasting and actions here are clearly not to waste time". This is also confirmed by other tweets which provide screenshots of emails written by David Elleray himself (Technical Director of the IFAB), that again mention the fact that "no law [was] broken", and that "game [was] restarted quickly" (link to tweet, image below). 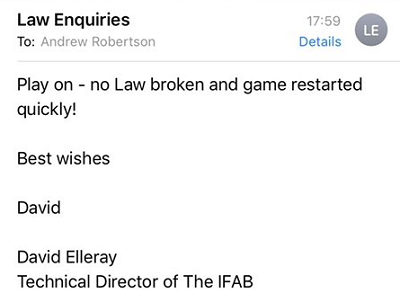 Now, let's consider that sentence from Law 12 again, the one that punishes trickery; it's considered unsporting behaviour, meaning that something about it is against the spirit of the game. This "something" can only be one of these two things:

Now, if the correct answer were the first one, this means that any attempt to circumvent a rule could result in a yellow card (remember that the list of unsporting behaviour offences is a mere list of examples, which could be expanded to include any other act or behaviour the referee deems to be just as unfair), which would then clearly include this situation as well. Yet the email in that screenshot clearly states that "no Law [was] broken", which means this can't be the correct interpretation; I've heard the IFAB also likened this situation (but sadly I have no screenshots of this) to kicking the ball at an opponent while taking a free kick in order to replay it, which could be seen as a way of circumventing the rules, but is instead—as we all know—permitted by the Laws themselves.

This leaves us with only one possible option: the unfair action behind the no-trickery rule is specifically going against the spirit of the backpass rule—and thanks to the first tweet (but it's also hinted in the email in the screenshot) we know what that spirit is: to prevent time-wasting.

But then, doesn't it mean that goalkeepers are able to handle most backpasses now?

Very rarely do goalkeepers feel the need to handle a backpass during a tiki-taka situation: this offence is more often than not called when a defender has no other choice but to kick the ball back to the keeper because he's being pressed by the opponents, and the GK accidentally picks it up with his hands. Yet there's no time-wasting ploy in the situation I just described, is there? It's just a defensive scheme, especially if the goalkeeper immediately throws the ball with his hands like the Benfica GK in the video above. Whistling for a foul here would mean going against the spirit of the law.

And the situation gets even more absurd when you think that if the defender flicked the ball up to his own head and then headed it back to the keeper under the very same circumstances, then the GK could legally pick it up according to this new interpretation because they weren't trying to waste time! Which means that if we punish the foul we're applying a rule outside of the scope it was originally intended for, and therefore we're encouraging players to circumvent it in situations where the spirit of the law would not be broken, in which case we're actualy told not to intervene because it would be legal for them to circumvent it!

What do you think of all of this? How should the referee deal with these offences after this groundbreaking new interpretation by the IFAB?

The IFAB issued a clarifiying statement on the matter.

There has been much debate about whether, at a goal kick, the goalkeeper is permitted to ‘lift’ the ball to a team mate to head or chest it back to the goalkeeper to catch and then put into play. The views of technical and refereeing experts about whether this is within the ‘spirit’ of the Laws is divided so the matter will be discussed by The IFAB. Until then, this practice should not be permitted nor should it be penalised. If it occurs the referee should order the goal kick to be re-taken (but without any disciplinary action).

Apparently, the IFAB is having the same discussion as you. Until further notice, the goal kick shall be re-taken without yellow card. Therefore, this move is illegal, as of the writing of this post.

Not the answer you're looking for? Browse other questions tagged rules football goalkeeper or ask your own question.

10
Is there a rule that protects the goalkeeper in the 6yard-box?
8
Is it against the rules to head the ball back to your goalie?
10
On a no ball, can both batsmen carry the stumps and run forever?
6
Can a player stand within the goal net (off the field) to avoid offside?
12
How long can a goalkeeper wait for opponent to come get the ball?
3
In football, what happens when a team commits an offence for which play need not be stopped, and then scores a goal immediately after?
2
Is it legal to use a trick involving another player to pass the ball to the keeper without kicking it?
3
Can the goalkeeper release the ball at their own goal, then save it from going in?
3
In football, a player is to be cautioned if he 'shows a lack of respect for the game': what does this mean?
2
Can a goalkeeper head a backpass then pick it up?