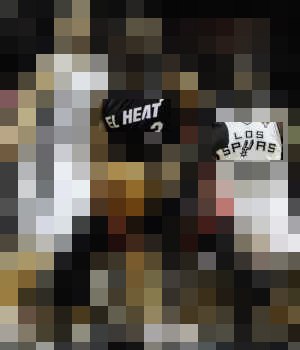 What is the motivation behind why NBA teams wear spanish jerseys?

Noche Latina, established during the 2006-2007 season, is a program by the NBA to celebrate Latin heritage for fans and players in Hispanic and Latin American communities.

Each season, selected NBA games contains Latin-themed activities, advertisements, and merchandise among other things in honor of "Noche Latina."

Share
Improve this answer
answered Mar 3 '13 at 5:56
user527user527
Add a comment  |
Highly active question. Earn 10 reputation (not counting the association bonus) in order to answer this question. The reputation requirement helps protect this question from spam and non-answer activity.

3
Jersey name for World Peace
4
What is the motivation behind short-sleeve jerseys in the NBA?
9
What is the motivation behind using the 2-3-2 (vs. 2-2-1-1-1) series format for the NBA Finals?
7
NBA draft picks as a team rebuilding strategy
5
Why didn't Michael Jordan appear in NBA Live 97?
6
Why do NBA stars keep playing in playoff blowouts?
6
In football, do player wear the same jerseys that are sold to spectators?
2
In the NBA, why do teams spend all their money available?
1
Has an NHL or NBA champion ever won all playoffs series with the same record?