So I've been working on creating a tournament bracket, and have drawn up some diagrams for how it will be run. The tournament involves 16 players. The Winners bracket is currently labelled like so: (with a few missing on the end) 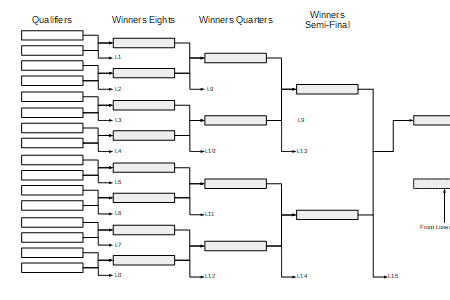 However, I wasn't sure how the naming convention worked for the Loser's bracket, as there are two rounds of the same size:

How should these rounds be named?

I can think of a few decent options for this bracket layout. For a simplistic approach, you could simply label them First Round, Second Round, Third Round... Final and leave it at that. Not very elegant, but serves the purpose of providing a label.

Another option could be to base the loser's bracket labels on the round from the winner's bracket they are coming from.

Alternatively, you could shuffle these around and use the term Play-in.

I still see an issue with the "Grand Final" round, as the winner may have already beaten the loser and to win, the loser will have to beat the winner twice, but that's not really relevant to the question at hand, I suppose.

A system where contestants that do not advance due to failing to meet the qualifying standard (beating a set time or score, or in this case winning the match) is called repechage.

What you are aiming to create is called a full repechage bracket ("full" because all losing contestants have a chance to eventually return to the main competition in some way).

Therefore, the names of each round in each bracket can be numbered according to traditional systems, preceded by clarification of whether they are the Main or Repechage bracket.

In likely order of play, these rounds would be

Not the answer you're looking for? Browse other questions tagged terminology tournaments or ask your own question.

10
How does a double elimination bracket work?
4
What is “double universe point” in Ultimate Frisbee?
2
What does “double pump” mean in basketball?
3
Is there a technical name and rules for a double-touch in badminton?
5
Elimination system where both opponents can lose
0
Drawing knockout(single elimination) fixtures
1
What's the English term for this double-elimination tournament variant?
6
Is the convention for reporting football results universal?
2
Single Elimination Blind Draw Bracket with # of Teams != 2^n