Is there any instance of more than 11 players from one team, on field during a professional football match? If yes, then what action was taken against the team?

A well documented occasion happened during the Dutch national championship in 2015, Utrecht versus Ajax. Edouard Duplan, Utrecht's forward, had an injury and left the field for medical attention. Meanwhile, the coach replaced him with Tommy Oar.

However, Duplan recovered and stepped into the field again without realising that Oar had already replaced him. It took two minutes until the referee realised the issue, apparently because people were laughing and booing. 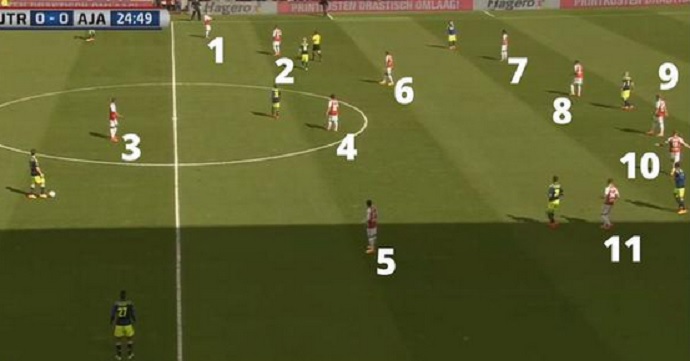 In the image above you can see 11 players (12 with the goalkeeper, which is not visible).

PS: In the comment below OP asks if any action was taken. Despite not finding anything online I don't think that that was the case, because everybody saw that Duplan made a mistake in good faith. That, for instance, is very different from what happened in the Santos vs Corinthians match for the Brazilian championship in 2006, in which Santos' coach deliberately put 12 players in the field for the kick-off, just to cause confusion ("confusion and delay", I should say, because it took 15 minutes for the match to start).

Not the answer you're looking for? Browse other questions tagged football or ask your own question.

12
Football - Two injured players from the same team
4
Does football (soccer) require more calories than running?
5
Can retrospective action still be taken for violent conduct even if the player is subsequently sent off for an unrelated offense?
9
What is the cause of so many cardiac related deaths in football/soccer?
1
Are there official rules and formats for small side soccer football without goalkeeper?
3
Do goalkeepers return faster than field players from injury in football?
4
What's the most number of players substituted at once in a soccer game?
0
Can a Player register in multiple clubs? or more than one?