Can the official fastest lap of a race be set in the first lap in F1?

Actually there are many reasons that make the cars slower in the first lap of a race.

On the other hand, the first lap is shorter than other laps on most circuits, because the start line is usually ahead of the finish line. In addition, if it starts raining in the 1st or 2nd lap, the fastest lap can be easily set in the first lap.

I'm questioning whether this lap can be officially recorded as the fastest lap. Since the distance is different from other laps and also different for each car, I would expect the first lap to be excluded from fastest lap records.

I checked the 2019 Formula One Sporting Regulations, but couldn't find anything relevant. The following part in Article 6.4 is about the 1-point award for the fastest lap, again nothing relevant.

In addition to the above, one point will be awarded to the driver who achieved the fastest lap of the race and to the constructor whose car he was driving, provided the lap time was achieved without incurring a penalty and he was in the top ten positions of the final race classification (see Article 45). No point will be awarded if the fastest lap is achieved by a driver who was classified outside the top ten positions.

Yes, the first lap is valid for setting the fastest lap.

However, for avoiding an opinion based answer, let's back up this assumption with an official record: all we need is a FIA official record of a driver setting his/her fastest lap on the first lap. It's not easy to find one, but for instance Martin Brundle set his fastest lap in the first lap of the South African GP in 1992 (columns are: Pos/No/Driver/Car/Lap/Time): 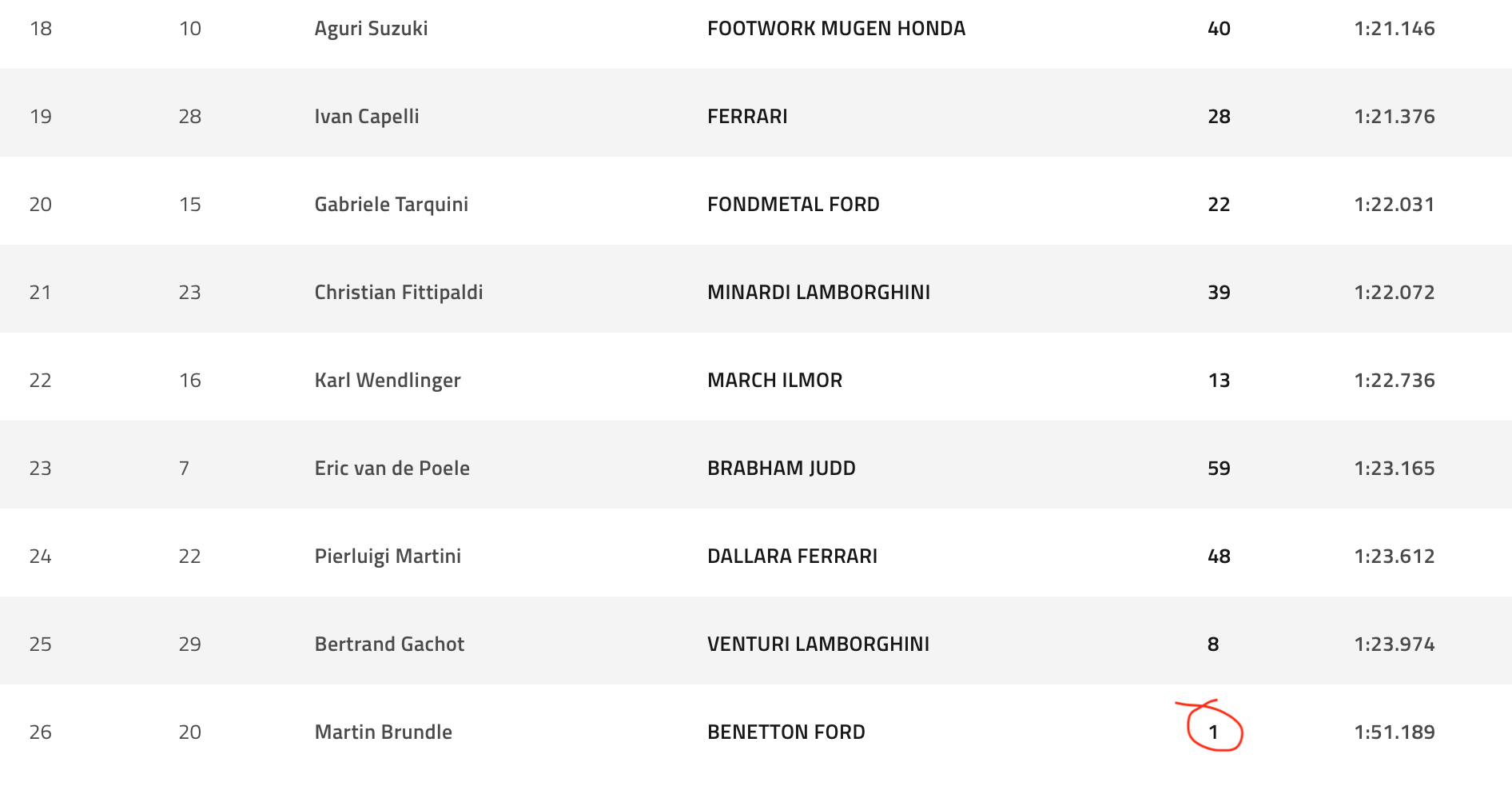 This shows us that the first lap is a valid one for setting the fastest lap.

Therefore, when you ask "can the official fastest lap of a race be set in the first lap?" the answer is yes, it can. What's the real chance of this happening some day? Well, except for a downpour starting on the second lap, as you mentioned, the chance is pretty much zero.

3
Why is the start/finish line halfway down the grid?

29
How are the number of laps in an F1 race determined?
29
In the history of Formula 1, when has the fastest qualifier not started the race on pole?
8
Can the volleyball be set over the net on the first touch?
4
Fastest Lap: Qualifying vs Race
6
F1: Mandatory tyre compounds
4
Can a car that retired join back the race?
3
Race Start Procedure when everyone pits on Formation Lap
16
What's the (official) motivation for requiring cars to have at least one liter of fuel post-race?