Why did penalty kick success rates suddenly drop from 2004 to 2005?

As featured in this answer, the penalty kick success rate in the Premier League was 92.3% in 2004, and consistently around 95% in the preceding seasons, but in 2005 it dropped to 77% and has stayed at around 80% ever since. 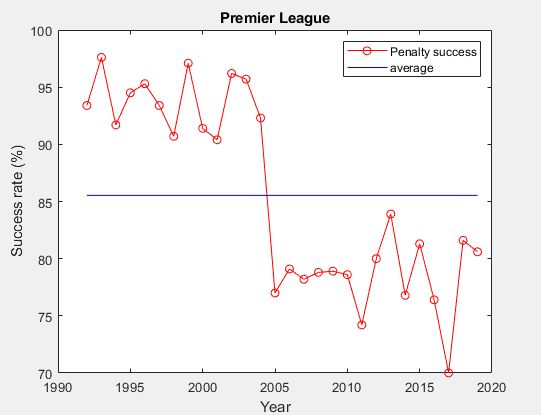 What caused this sudden drop? To me, it would seem as if a rule change was enacted.

The values before and after the jump are rather constant so I expect this sudden change not to be correlated to any change in player performance. This gets even clearer if you superimpose the Premier League and Bundesliga values from the original post: 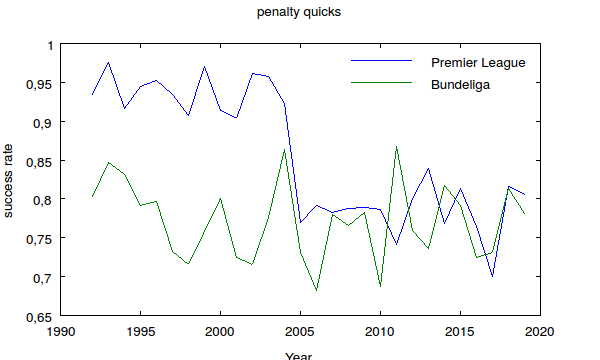 The average success rate of penalty kick in the Premier League drops after 2004 to the same value as the average of the 1. Bundesliga, around 76%.

I think it is very likely to have been caused by some technical aspect:

Similar jumps can be observed in swimming time records. Those happened when new moves, a new pool shape and new swimming suits were introduced, respectively. However, they describe an apparent jump up in athlete performance.

Other technical aspects lead to an apparent sudden decrease in athlete performance. You can observe this for example in the profile of the javelin throw world record over time: 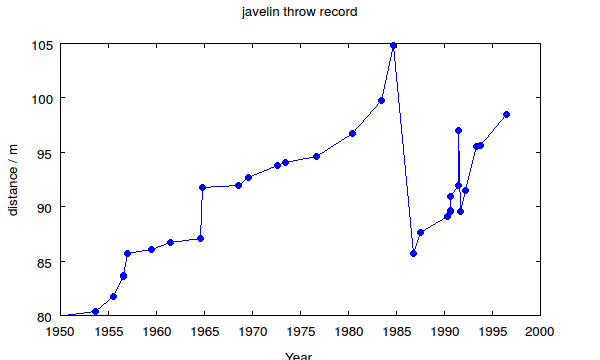 The javelin originally used was replaced with a heavier one in 1986 and another javelin model was banned in 1991. Previous records were set back to zero or disregarded, respectively.

I cannot think of any similar possibility to explain the Premier League drop from this point of view, though. Historically inaccurate but mathematically plausible examples would be:

Even more likely to cause the observed discontinuity in penalty kick performance is the evaluation method. This is what happened in decathlon where the conversion of ten performances into one single value is quite complicated. Evolving conversion formulas lead to "variation" in athlete performance! The corresponding Wikipedia article states:

Akilles Järvinen, the silver medalist in the decathlon in both the 1928 and 1932 Olympics, would have won gold in both years rather handily under most later years' scoring tables.

The values we are talking about in the Premier League case are yearly averages. Which shots you consider and which not also influences the outcome. For example, disregarding all penalty kicks "not on target" (completely missing the goal area) for the computation of the average could considerably increase its value.

Consider for the sake of the example a player with following statistics:

Although it sounds pretty likely, I could not find any information to corroborate this assumption.

6
Is penalty success rate increasing over the time?

4
Why do referees suddenly care so much whether or not the goalkeeper has a foot on the goal line during a penalty kick?
1
A player doesn't want to take a kick during kicks from the penalty mark