What was this NHL match, possibly in 1999, where the National Anthem was sung by Christina Aguilera?

I'm trying to identify a game on which Christina Aguilera sang the National Anthem, as appears on this video. 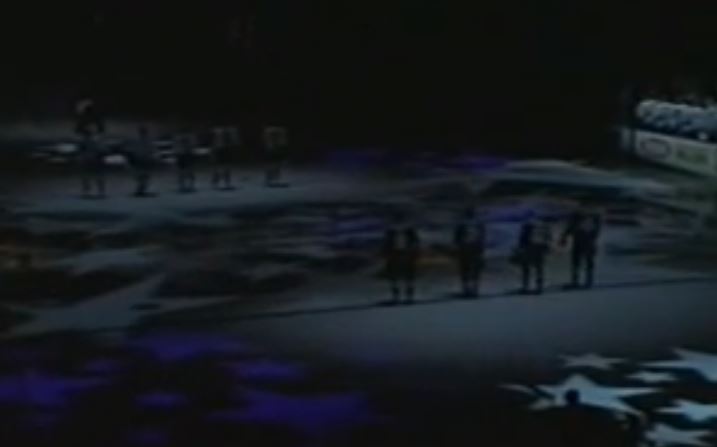 Can you identify this game, or at least identify some more clues that would help?

Your fact finding of it taking place in Anaheim is correct based on announcers. I think it is safe to assume based on uniform colors that the team on the far side is the Ducks. They featured a light color top home jersey at that time.

Placing an identification on the opposing team is more difficult given video quality. Based on this schedule, it would appear that there were 20 home games that took place in the year 1999 in the 99-00 season. This also could have been in latter half of the 1998-99 season, found here. That season featured 24 home games for the Ducks, with an additional 2 postseason games versus the Detroit Redwings. So a total of 46 NHL games were played there.

Based on the jersey colors, I believe the opposing team is the Philadelphia Flyers. The light strip across the neckline appears in only 2 jerseys that have a dark body and light number, Philadelphia and Tampa Bay. Tampa Bay, however, features a large white block on the bottom portion of the jersey which would be seen clearly even with poor video quality.

Aside from the jersey aspect, the "goalie matchup" comment at the end of your second video link would support this. The Anaheim goalie Dominic Roussel had posted the highest save percentage of his season in October, winning both games in which he appeared. Philadelphia's netminder John Vanbiesbrouck closed out 12th overall for the season and posted a .908 save percentage in the month of October. This would mean that the goaltender matchup would have been considered a meeting between two strong players at that point in the season, supporting this theory.

Therefore I believe this took place a the game between PHI and MDA on November 3, 1999.

Not the answer you're looking for? Browse other questions tagged history nhl match-identification or ask your own question.

8
What was the first team to use the 1-3-1 Forecheck
7
Where and when was the first women's soccer team introduced in the USA?
8
What happens if the result of match was found wrong after the match day?
7
What anthem does the West Indies cricket team use?
2
When was the First T20 match played?
2
Who was the youngest player to play in an NHL game?
10
Which player was named the first star in most NHL matches?
2
What is a “college free agent” in the NHL?
4
Game misconduct at the end of the NHL match