Why do teams almost always pass on 2-point conversions?

There has been some analysis showing that the closer a team gets to the end zone, the lower their completion percentage will be due to less open space to work with. And running plays average 4 yards per carry, so that shouldn't take them out of the equation since the ball is placed on the 2-yard line on a two-point conversion.

A passing play will still open the field more than a running play.

Also called "jumbo", "heavy", "full house" and other similar names, this formation is used exclusively in short-yardage situations, and especially near the goal line. This formation typically has no wide receivers, and often employs 3 tight ends and 2 running backs, or alternately 2 tight ends and 3 running backs. Often, a tight end or full back position is occupied by a player who normally plays offensive line or defensive line positions to act as an extra blocker.

Since the defense will have an opportunity for substitution they will follow suit and load the box with as many linemen as possible, possibly up to seven.

The result is something that may end up looking like this... 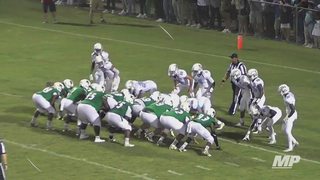 As you can see there will be little room for a running back to maneuver between all those big bodies. The gamble for the attempting team is that the offensive line is stronger than the defensive and can push open a hole for running back to squeeze through.

While the average for a running play is 4-yards, that is from a more normal line of scrimmage and in a two-point situation there are only two yards to be gained. The running back will not have the time or space to get up to full speed and potentially make a defender miss a tackle or break one.

Now the results bear out something different... Runs are more effective.

Noah Riley tracked all 506 2-point conversions over the past seven NFL seasons and found that only 48.8 percent were successful. What’s more, a clear pattern emerged: nearly 80 percent of all 2-point plays were passes, and only 45 percent worked.

However it is probably teams are expecting a pass and the offense is probably lined in passing formation. this would alleviate the problem of having a stacked boxed and allow the running a larger gap to shoot.

Obviously those 107 runs benefitted from the fact the defense expected pass; if the run/pass distribution evened out to 50-50, it’s hard to believe 63.6 of runs would still be successful.

Not the answer you're looking for? Browse other questions tagged american-football nfl strategy or ask your own question.

2
What would be the effect if the 2-point conversion was changed to 3-point?

11
Improving 7 vs 7 team and strategy
4
Why do players tend to pass the ball when taking corner kicks in soccer (football)
6
NFL: Why do kick coverage teams always run all the way down the field
8
Is there a penalty for kicking a PAT from the 2 yard line in the NFL?
6
Why do teams take knee before halftime?
8
Why would NFL teams do a fair catch?
0
Why do football teams like running up the middle?
2
Why does the official say “prior to the pass” or “after the pass” when calling a defensive holding?
3
Why don't NFL teams keep a punter who can kick field goals?