What does 0.1 inning mean in baseball stats? 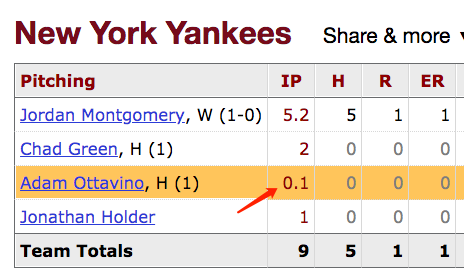 Similarly, Jordan Montgomery gets 5.2 IP. What does that mean? How is this stat calculated?

Pitchers IP or "innings pitched" stats are recorded as the number of outs that the defense was able to generate, listed in innings, during the time when the the player is the pitcher of record. Three outs is equivalent to one inning.

It is also common that if a pitcher starts an inning but has to leave before any outs are recorded, the inning count has a plus sign (+) next to it. So if Smith pitches the first four innings, then faces 3 batters in the fifth without recording an out before leaving, that line could be "IP: 4+"

In your example, the pitchers earned the following number of outs.

Although the decimal notation that is commonly used does not seem to be mentioned, the practice of recording outs as fractions of an inning is detailed in the MLB rulebook. 9.02(c)(1) lists that the number of innings pitched is an official stat to be recorded and has the following comment:

7
Error or Earned Run?
1
Relief/Closing pitcher statistics
2
Electronic Assistance in baseball
3
Blown save when starter is ineligible for a win
2
Interpretation for sequence of slugging percentages
4
Sign stealing in baseball
5
Why was Sisco's 9th inning bunt vs the Minnesota Twins a bad play?
0
What does "gets pulled" mean in a baseball game?
1
What does F/10 and F/11 in MLB stats mean?