Why does there seem to be more pitching changes in recent years?

The last time I watched baseball was in 2012, and there has been more frequent pitching changes, especially in the post-season.

In 2018, teams set a new record by averaging a combined 8.41 pitchers per nine-inning games, according to data provided by Major League Baseball. That broke the previous mark of 8.20, set in 2017, which surpassed the standard of 8.00 established in 2016, which … you get the idea. Clubs teamed to use an average of 6.91 pitchers in 1999, and here we are now.

If by "recent" you mean "since 2012", yes it's up, but I would say it's just a continuation of a trend that has been going continuously since the 1980s. At least in part due to this trend, in 2020 rules were added that force a pitcher to face a minimum of three batters in most cases before eligible to be replaced. 2020 is an odd year for many reasons, and I haven't seen stats for how the changes have affected this trend.

Jim Albert has a blog with a nice article on historical pitcher usage. One piece that is particularly telling is a graph of average pitchers used per game: 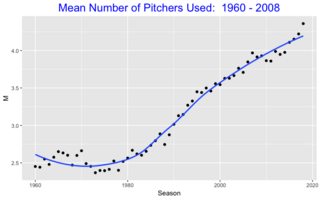 What's the cause, though? Nate Silver has a piece at fivethirtyeight that points out that pitchers are more effective when they only pitch one inning. They can exert more effort for that inning and the strikeout rate goes up. Good for the individual pitcher and that team, but drives the arms race toward more pitchers and especially more relievers.

Not the answer you're looking for? Browse other questions tagged baseball statistics or ask your own question.

25
Why does a foul ball not count as a third strike?
4
Does football (soccer) require more calories than running?
6
Why are there so many pitcher types in baseball?
4
Why does there exist a pause on seventh inning?
7
Has there been an athlete to win a College Championship in two or more different sports?
3
Is there something called an offensive error in baseball? If not, why not?
10
Why are there no left handed catchers in baseball?
0
From high school to college to professional sports, why do the same teams seem to consistently win and lose year after year, decade after decade?
1
Why combine stats, especially the 40-yard dash, relevant and referred to years after the draft?