Based on the pandemic-shortened playoff format for the MLB, what are the odds that a losing team would make the playoffs?

In the pandemic shortened season this year (2020) 2 teams (the Astros and Brewers) both finished with sub-.500 records at 29 wins and 31 losses. So my question is the following: If the 2020 playoff format were to continue for the following seasons, what is the odds of a sub-500 team making the playoffs? This year it was 2/30, but if 15 teams are above a .500 win percentage, then the odds of a sub .500 team making it would be 1/30. Is this correct, or is there some other factor that influences the probability of sub-.500 teams making it into the postseason?

For the moment I'm going to correct a few of your assumptions, and then put some numbers to the page.

Calculating the chance of a team with a losing record making the playoffs is pretty hard to do well, because it's not a "random" event like a die roll. Ideally you would create a model that took into account all of the possible variables that impact team records, and simulate a bunch of seasons. There are places that do that, for other reason (ZIPs projections and such), and it's possible that data is available somewhere - I'll look. It's also probably worth passing FanGraphs this question via Twitter, and seeing if they have this number already! There are some simulation programs out there that may or may not be particularly accurate, but they might be useful enough to give an interesting result.

The easier way to do this is probably to look at the last thirty or forty years and see what happened retrospectively. This won't be perfect; some teams who might've been competitive, but weren't going to make the playoffs under the old rules, might have thrown in the towel (see the 1997 White Sox as a good example - they finished 80-81, and not only would've played game 162 if it had mattered for playoffs, but almost certainly don't trade Wilson Alvarez and Roberto Hernandez to the Giants if they'd been a playoff team at the time of that trade). But at least we could find out what the general distribution was, and then determine from that what the probability in 2021 would be.

Just to give you an idea, though, from the distribution mentioned in this article, and then doing a bunch of simulations of my own, just over 42% of the time the bottom seed had 80 or fewer wins. That's not going to be nearly as accurate as a real simulation, but it's probably reasonably close. 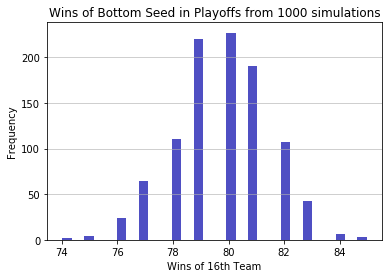 So the answer to your question is either, around a 40-50% chance (if you believe my random simulation), or a 75% chance (based on recent history), or, most likely, something in between.

Not the answer you're looking for? Browse other questions tagged mlb postseason or ask your own question.

7
How much revenue does a team make for a playoff game?
4
What are the guidelines for declaring for the MLB Draft?
4
What criteria determines which team makes the national college football championship playoffs?
8
Can a team in the NFL make the playoffs with only three wins?
5
What is the best record to miss and the worst record to make the NFL playoffs?
13
What team has the shortest "longest losing streak" within a season in MLB history?
7
NFL division with 3 teams in the playoffs
1
Why did the NHL move to the current playoff format?
3
What are the rules for resuming/scoring a rain shortened game in baseball?