Do NBA players make a higher percentage of 3-pointers from the side?

This shows what an NBA basketball court looks like: 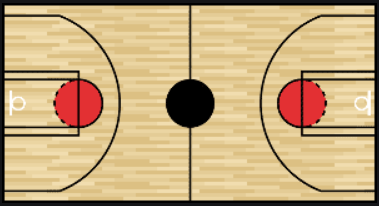 As you can see, the 3-point line is an arc until it gets close to the sides of the court, where it becomes a straight line due to not being able to fit within the width of the court.

Corner threes are much more efficient than wing or straight-up threes. 82 Games' stats showed corner threes as being about 118.8 points per 100 possessions, while the other two are much lower. (Though, all three are worth doing - Wing 3s are just about the same as an average shot, and straight up (top of the circle) threes are 105.3 points per 100, which is quite good also. Only shots from the low paint - e.g., layups and dunks - are more efficient than those.)

Much of this is because these are more often uncontested shots made by three point specialists, of course; it's quite common to put a pure shooter (Kyle Korver type) in the corner and hit him with a pass when his defender comes over to the post to double someone. That means these shots are often unguarded, and so are higher percentage.

Finally, FiveThirtyEight has some nice charts from Kirk Goldberry, which I highly recommend.

5
What percentage of football goals originate from corner kicks?
7
Basketball shooting technique: what makes the ball go forward?
12
Why don't basketballers take more long shots?
3
What is the highest two-man stat line from teammates in NBA history?
6
Do NBA players earn from their jersey sales?
5
What is the average height in the NBA?
1
Percentage breakdown of categories of doubles in NBA
1
Lowest regular season win-loss percentage to qualify for the NBA Playoffs?
3
What percentage of NBA games had at least 2 guards from the same team post at least 10 rebounds each?
0
Which NBA player has the most career shots?