Doubles positioning at the net during serve

In doubles (particularly at a 3.0 or 3.5 level), what should the net players consider when choosing where to position during the serve?

This is a very subjective question with a lot of variables and no verifiably "correct" answer, but I will lay out a few common scenarios at this level based on my own experiences. Players should experiment and adjust for their own abilities.

Scenario A: Playing with a new partner with an unreliable serve

Perhaps the most basic answer to this question at this level is "wherever your partner is the least likely to hit you". Given that standing off the court is not a great option, your safest bet is to straddle the singles sideline while staying low a few feet back from the net. 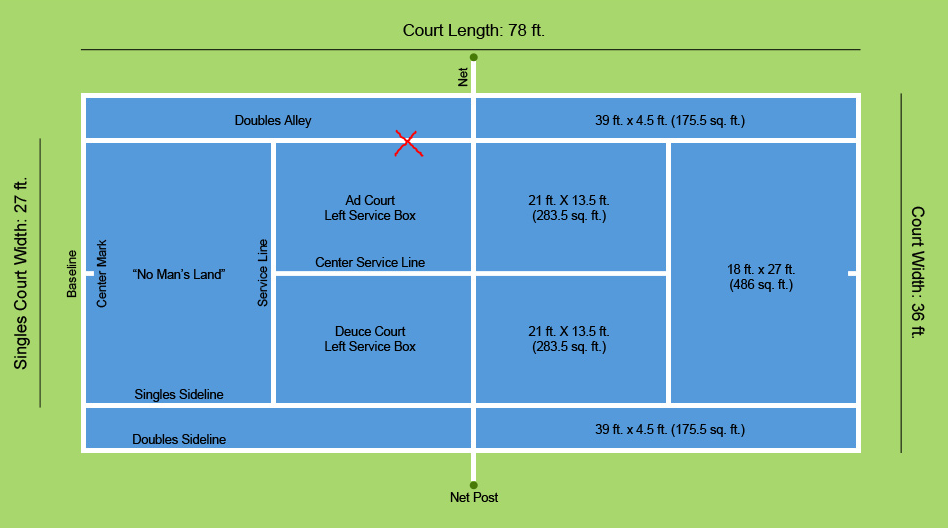 It's generally preferable to stay closer to the net rather than near the service line, as the further you move back, the fewer shots you can intercept at the net. In short, you cover the maximum amount of court while close to the net, forcing people to either go around or over you. At this level particularly, any time you can force someone to do something or make a decision is going to be an advantage for you.

Scenario B: Playing with a trusted partner with a moderately reliable serve

In this scenario, you will likely be more assured that your partner has sufficient control/self-awareness to understand their limits and not bean you (too often) on a serve. This opens up a few more potential strategies that will change your positioning though that described in Scenario A is still perfectly fine.

In this case, you cheat in a few feet (red X) while your partner attempts to serve wide (yellow target). This again leaves you the opportunity to cut off a potential winner down the sideline while more aggressively pursuing a cross-court return. Again, you'll want to duck down during the actual serve. This is also an effective strategy if you partner is comfortable at the net, and you want to be more aggressive by having them rush the net immediately after serving.

At this level, aggression forces mistakes pretty often (on both your and your opponent's end). Note that you can easily cheat in a step or two after the serve from the "safer" position on the singles sideline, which can cause opponents to hesitate between trying the line or going cross-court and lead to them hitting a middling shot. Tracking player position and ball movement simultaneously is difficult for players at this level, which you can use to your advantage. 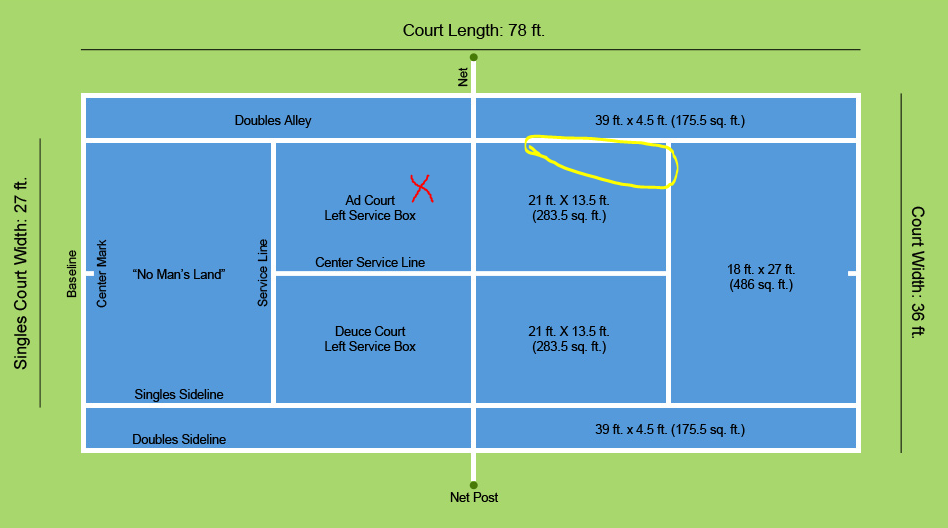 In this case, you start at the same position as in strategy 1 (red X) while your partner attempts to serve center (yellow target). As they serve, you can slide even further towards center to try to force your opponent to attempt a wider shot than they might be comfortable attempting. This is particularly true if you can force them to return via their backhand, with which many people do not have great placement at this level. Note that you do leave yourself more open to a return winner down the sideline if attempting this. 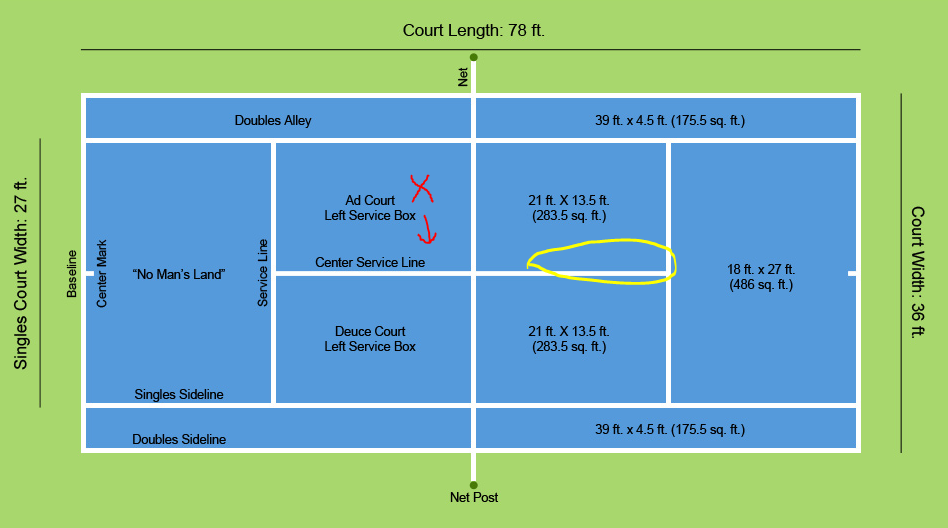 Note that variety is helpful, so mix things up and have fun with it.

Not the answer you're looking for? Browse other questions tagged tennis serve or ask your own question.

6
What does "open divisions" mean in a USTA tournament?
9
What happens when ball touches net during serving?
7
Pulling back racket (racquet) immediately before serve in badminton
3
Techniques to return aggressive tennis serves?
4
Is the Doubles Long Service Line active during a Singles match?
5
What are the rules if the receiver isn't ready for the serve in table tennis?
2
Serve deflected to the left hand court in a doubles match, is it a let?
3
Why do many tennis players crouch-then-uncrouch before receiving a serve?
2
Two-handed "attack" return on a serve?