How does a typical spread offense contrast from a typical pro-style offense?

In the NFL, several teams such as the Carolina Panthers (with Cam Newton), the San Francisco 49ers (with Colin Kaepernick), the Seattle Seahawks (with Russell Wilson), and the Washington Redskins (with Robert Griffin III) to name a few are utilizing a spread offense.

When Tim Tebow was a starter for the Denver Broncos, he led his team to a division title and a playoff win utilizing the spread offense, proving the formation can be successful.

How does a typical spread offense contrast from a typical pro-style offense? What positional/role players are suggested for optimal use of such a formation?

The problem in answering this question is that there isn't just one style of "spread" offense. While Tim Tebow and Cam Newton may have both run the spread, they ran it in almost completely different ways.

With that said, there is an underlying theme to the spread offense. In a typical spread offense, the QB lines up in a shotgun formation with a 4-WR set (i.e. no TE or a TE lined up wide) and a single back on either his right or left side (NOT behind him). Because the RB is at his side, he isn't in a great blocking position. Because of the lack of protection, the QB will basically run a "1-read" system, where he makes a single read to WR and then dumps to the RB if the WR isn't open. 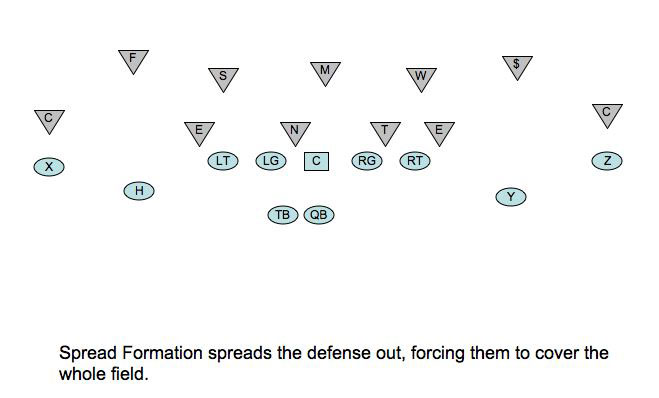 In a pro-style offense, the QB will line up under center with 1-2 backs lined up behind him. He'll have a staggered set of 2-3 WRs and a TE. With the additional protection, the QB will usually "go through his progressions" of scanning his receivers (this is usually 2-3 seconds). The reason this is typically utilized in the NFL is because so many different plays can be from this formation, which can be difficult for most defenses. 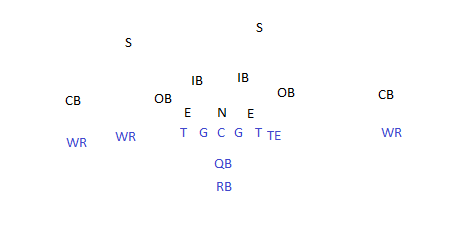 It's important to note that many "Pro-style" QBs (e.g. Peyton Manning, Aaron Rodgers, Tom Brady) also run their own variations of the spread. Because of their athleticism, they typically can make more than "1-read" and therefore don't necessarily suffer from the vulnerabilities of the spread. It's important to note that when they run the spread, they are typically releasing the ball within 2-3 seconds. This is important because the reason the spread isn't as successful in the NFL is largely due to the faster defenses.

The reason Tim Tebow was getting so much flak for only being able to run the spread is that he wasn't able to make more than a single read and still release the ball in 2-3 seconds (largely due to his throwing mechanics illustrated here). Also, Tebow and, to a lesser extent, Cam Newton were much more prone to running the read-option, which works a lot more in college because of the slower overall speed of defenses. Tebow was able to have some success with it in the NFL because of his speed and strength, but it's not a sustainable offense as it can become incredibly predictable.

So, in reference to the article you listed, the spread can be successful in the NFL, but it requires higher athleticism and still needs to be mixed up with other formations to confuse the defense. The younger "Spread style" QBs you mentioned are successful not only because they're running the spread, but because they can still run a pro-style offense when they need to.

This is more of a supplemental answer since this accepted anser answer did not touch on the characteristics/attributes of other positions outside of the QB position.

It's more advantageous for linemen in this offense to be quicker, especially in lateral movement, even at the detrement of being better pass blockers or power blockers due to less of an emphasis on traditional dropback pass plays and downhill running plays.

Many spread running plays are all predicated on a stretch zone blocking scheme where the lineman all attempt to block laterally and gain outside leverage on the defender that is threatening the gap to the side they are blocking. The lineman must be athletic enough to be a threat to do this, otherwise there is very little reason for the defense to flow as hard to the side the lineman are blocking to. It's the threat of the lineman getting outside leverage that even allows the QB to option off of a backside defender when choosing what to do.

There is more emphasis on both being a good blocker and favoring more quickness... in their case it's so they are able to perform blocks such as arc blocks correctly (see http://www.coachwyatt.com/veerexplained.html).

Athletic and durable enough to be a ball carrier but must still be a threat to be a weapon throwing the ball. Must be able to quickly make reads of defenders in the box during running plays.

Required to be better blockers than typical and also better at running routes against man coverage, as opposed to being great at running option routes or finding holes in zones, since the majority of coverages seen will be man coverage with a single high safety. Speed is more of a premium here.

Also, as a bit of a soapbox rant, the term "spread" is really a media invented term used to describe and communicate about a style of offense where the primary goal of the base offensive plays is creating options between a QB/RB and a single defender "in the box" in order for a QB to make a single read and determine, in the middle of the play, what he should do with the ball. This specific concept is really no different than the option offenses that have been run throughout the history of football.

The only thing that makes it interesting now is that the initial alignments in formations resemble what a passing oriented pro style passing offenses look like and that the plays are designed such that interior blockers are engaged in a lateral leverage style of (zone) blocking as opposed to straight ahead power blocking or over reliance on angle and trap blocking.

The intention being to get the defense moving in one lateral direction away from where the QB can be potentially isolated against a defender responsible for containment in the opposite direction of where the defense is moving. The Broncos of the late 90s, Falcons of the early 00s, and the present day Texans, utilized these concepts too and with great success, except they do it under a center and with pre-snap/predetermined reads with stretch zone running plays and QB bootleg action.

If you really want to see a fun evolution of this, watch these videos at http://brophyfootball.blogspot.com/2011/08/alex-gibbs-stretchgun-run-developments.html where Alex Gibbs, the run game guru from the Broncos and Falcons during the 90s and 00s, consults with the University of Florida staff on improving their running game.

8
How does the interference call work in american football?
19
How does one get 5 points in a football game?
4
How does one play baseball and football (professionally) at the same time?
6
How many championship rings does Troy Aikman have?
8
Does a fast paced NFL offense tire out the defense more than the offense?
0
If the defense commits a penalty on an extra point after a turnover does the offense get to retry the point?
1
How much does a dropped NFL player earn while with a team during the pre-season
3
How does the RB know when to grasp the ball on a read option and when the QB is selling the fake?
2
How does a player re-establish position infield?
0
How does a fumble at kickoff or a punt - recovered by kicking team - affect win conditions in overtime?