How to maintain sport gears made of leather? Oil them not to get holes? Repairs? 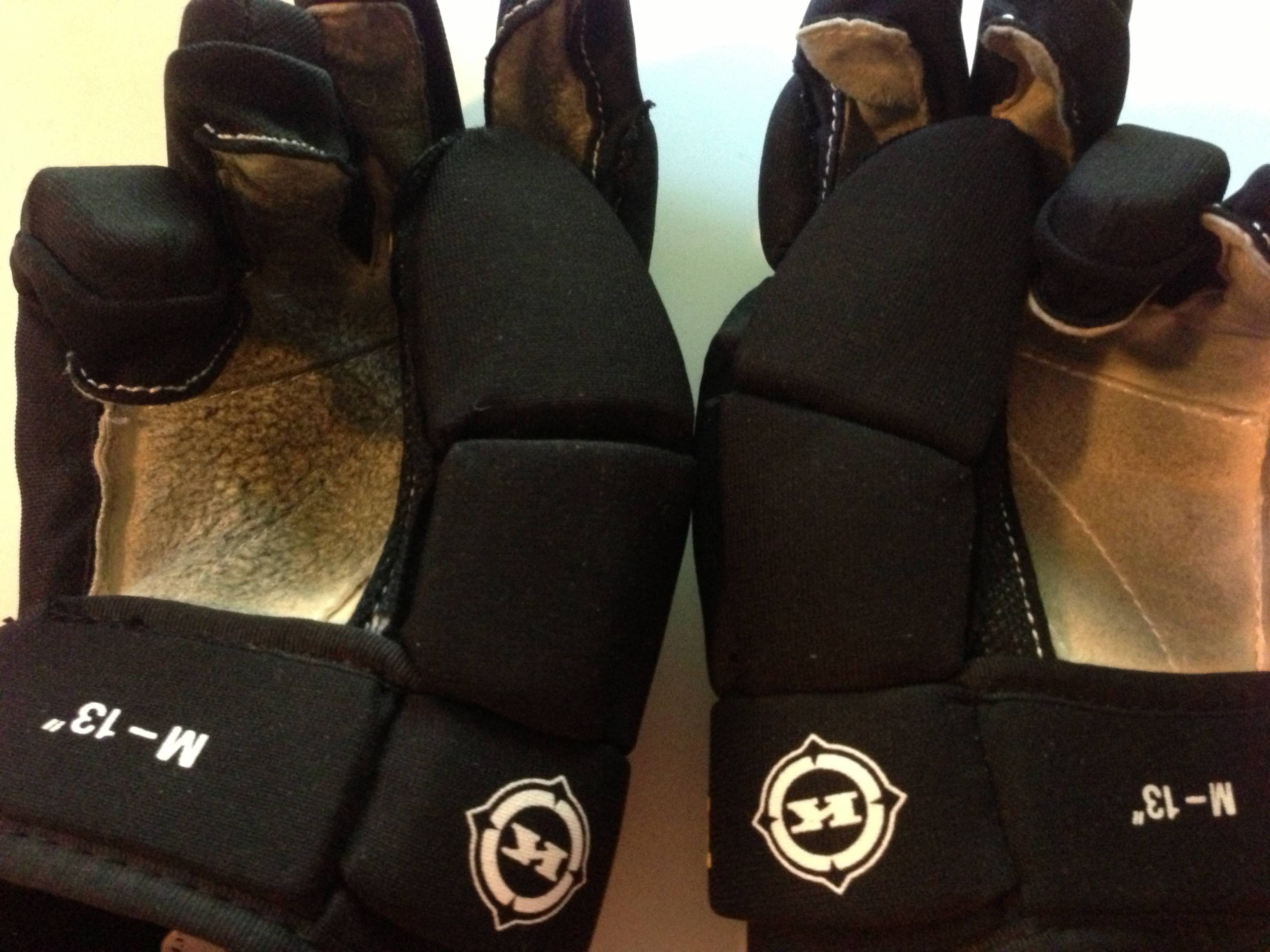 Yes it is a major task to maintain any leather material,

How to clean a leather

There are two main types of leather

where the preservers contain mink-oil and neatsfoot oil. Saddle soap is an example about conditioning, a key component is the beewax-turpentine mixture.

Copied from the informercial here

Suppose your ice-hockey gloves use leather made of cattle. It sounds natural that the best oil to use with it is an oil of cattle such as neatsfoot oil or some other animal-oil with similar properties. Mink-oil cannot be used as a neatsoil because it is not liquid in room-temperature, this is a key feature way neatsfoot looks to be the best candidate to get your gloves soft and last longer. After letting the leather to absorb the neatsfoot oil, you can add the final polish with minkoil that can be bought as a solid in room-temperature, better protection against hits on the top layer. So my recommendation is to use neatfoot oil and mink oil or a creamy animal-oil (see the below example). Do not use the mink-oil for the final polishing if you need extra friction like on ice-hockey gloves. For baseball-gloves where the friction is a no-brainer, I think you could add it or choose the plan III.

I. Neatsfoot (animal oil) is recommended over linseed oil due to smell here and one answer recommends to use neatsfoot oil for leather and linseed oil for wood. This sounds logical because of the different ecology.

II. Mink oil (animal oil) for adding the final protection on the leather.

III. Creamy animal oil only (heat/dry it well before using -- example below apparently with lamb oil)

IV. Linseed oil (non-animal oil) is a cheap candidate but results into a nasty smell like baseball-glove over time, more in the thread.

V. Wax (non-animal thing) such as beewax is also mentioned but this requires you to dilute it with turpentine to break carbon-chains smaller, apparently targeted for people loving animals. One example is the beewax, turpentine and linseed oil in 2:1:1 ratio (key pictures here and here about the process)

where the animal-oils are apparently better in protecting against cuts and holes, please, see the comment by the user gbianchi. Also the non-animal-based solution with beewax uses mineral oils that can be bad to your gloves according to Wikipedia: mineral-oil-based solutions can destroy the stitching and "speed breakdown of the leather itself". Examples are turpentine-beewax-solution and WD40. Some manufacturers add non-animal oils soya oil to the animal oils -- this may have no issue, anyway pay attention to concentrations. So if you choose a wax or a linseed-oil, pay attention that the leather does not break up easily. Also if you buy an animal-oil, check up the concentrations -- it may have some components such as synthetic oil bad to your gloves.

I have experience in using non-animal oils with leather footballs over two years' intensive training. Even though my balls were less intensively used to other balls, they apparently got dry because of the bad oil -- I used vegetable-oil that did no good with the balls: they become even more dry and eventually broken. My hypothesis is that animal-oil may be better and the way you process the sinking and afterwards cleaning is very important: you need to get the extra out and let enough time for the ball to absorb the oil and recover. If you are uncertain how to do this, do not do it -- otherwise you risk damaging your equipment! 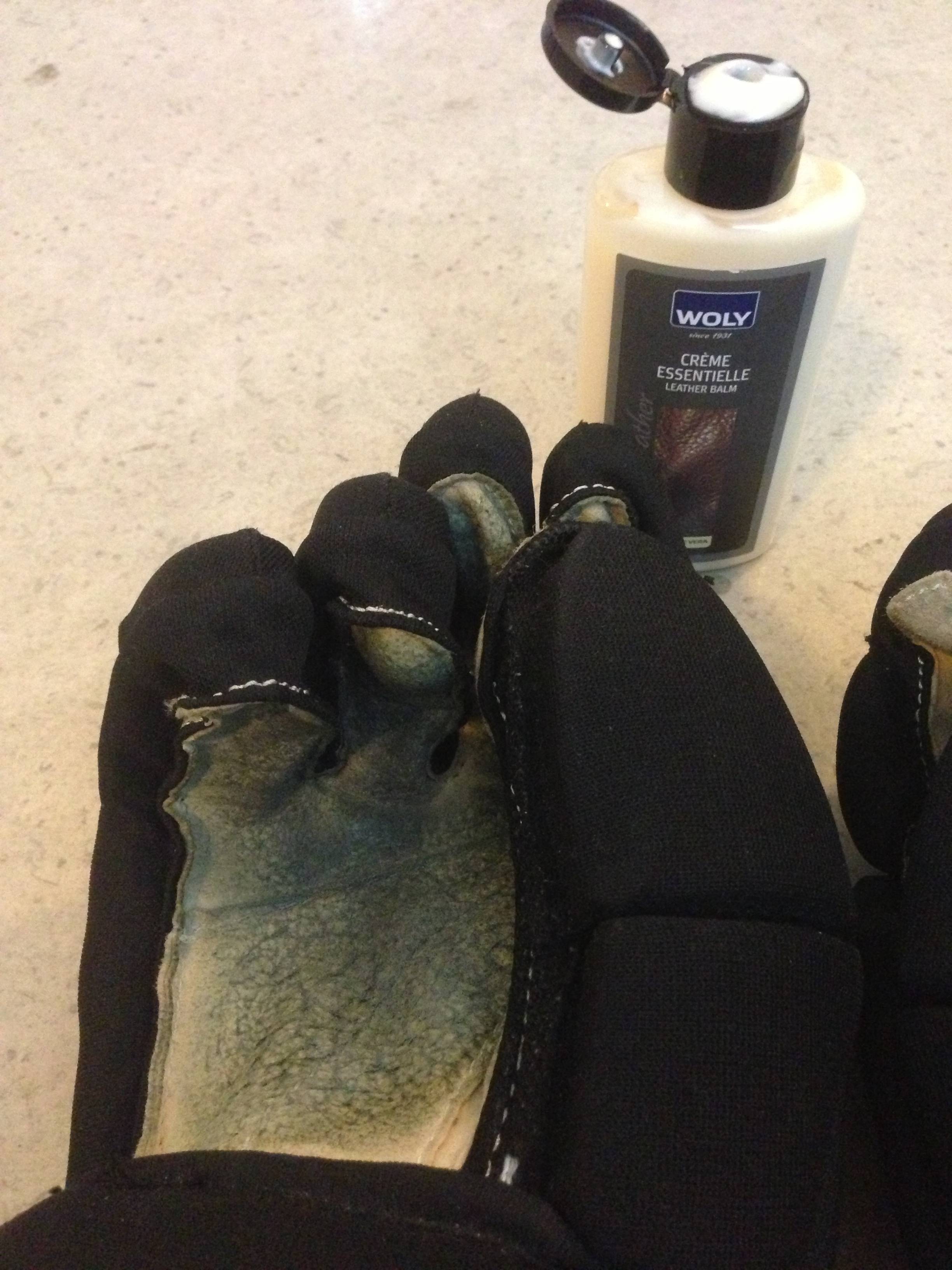 B) use a creamy animal-oil

where the A I think is pretty outrageous particularly if your gloves costed less than 75EUR. So I went on and tested the animal-oil cream lotion in Woly Creme Essentielle Leather Balm (150 ml costed me about 9EUR). Now because I strike from the left, the right glove is much more consumed than the left glove. The left glove was in excellent condition while the right glove getting too dry so I used the oil only on the right not wanting to get the left any slippery. The result: the gloves are much more confortable in the hands and and the right glove is not anymore dry to get broken and not too slippery! Even though the craftmen warned that the gloves can become too slippery and they tried to sell me service of replacing the leather, the leather did not become too slippery because I used it only the smallest amount and the places where really needed -- I think I saved a pair of ice-hockey gloves for a year at least! When you apply the oil, have some protective gloves because the animal-oil gets absorbed through your skin and it feels bad. Test your gloves only after getting the gloves totally dry so you won't get the oil to your hands. I also recommend to use the smallest amount posible the oil so your hands won't get the oil absorbed and the gloves not getting any slippery while still getting soft enough not getting broken and to last longer.

Whatever you choose for the leather to absorb the oil, heat speeds up the process. When you apply the oil to the leather, let it sink for a while -- many sources/videos recommend 24 hours' sinking. If you use wax, you need to rub it and use external heat to get it well into the leather. After the sinking/rubbing-heating, you need to rub/clean the extra oil/wax off. If you use your leather equipment such as gloves or ball too early, you risk damaging the equipment! You need to let enough time for the gloves or ball to recover so you don't get a hole to the leather after short time use or airs out of the ball.

Hope this saves you some leather equipments over time!

100% vegetable oil will not harm leather and can help restore the oils lost through use and different exposures, such as sun, heat, dirt etc. Neatsfoot oil would be great but what is labeled as neatsfoot is pig oil. There is no commercially produced neatfoot oil. Go find some Pappy's Dubbin.

Not the answer you're looking for? Browse other questions tagged equipment ice-hockey maintenance or ask your own question.

19
How do you correctly learn how to hockey stop
13
Which athletes were the first to break the color barriers in hockey?
5
Is it possible to fix a skate's cracked toe cap?
4
How to select watch able to sustain sprinting and heavy sporty usage 24/7?
3
Is baking the skates equivalent of quicker breaking them in?
6
How do I make my table tennis paddle's rubber less sticky?
6
Why are tennis balls not airtight?
10
How much can heat/weather affect a table tennis table?
13
Are the gender differences in Olympic uniforms simply a style choice? Whose choice?