Is it unlawful or not-done to field between bowler and sight screen?

In cricket, play usually stops temporarily when spectators or personnel walk or stand in front of the (live) sight screen. What about fielders? Should they move elsewhere on request?

The role of the sight screen is to help the batter see the ball at the start of its flight, as it leaves the bowlers hand. If you think about the angles involved, it is mainly the upper portion of the sight screen that is used, so a fielder standing in front of it would not block this view.

Fielding directly in front of the sight screen would be a very poor field placement in any case.

It is not unlawful to field between bowler and side screen. In fact there is a fielding position for that and it is called straight hit. 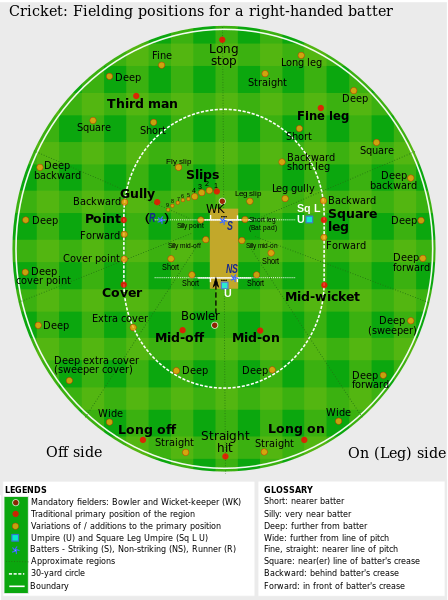 Usually the fielder is placed at an angle and I don't remember any captains using this fielding position. You can see all the rules here.

6
Should a non-striking batsman move sideways, if asked by an in-line fielder?
4
How do pro baseball (or cricket) players decide who should catch a fly ball?
7
What happens if a team walks off the field during a football match?
6
What happens when an umpire (MLB) calls time improperly?
1
Updated power play rules for an ODI?
1
Who decides this type of things in LIVE cricket matches?
3
In football, what happens when a team commits an offence for which play need not be stopped, and then scores a goal immediately after?
2
What's the protocol when an opponent is injured and your team has posession?
2
Two-handed “attack” return on a serve?