What is this three-against-one game with red and blue balls?

On a recent visit to the University of Colorado, Boulder, I saw some students playing a sport I've never seen before. I'll do my best to describe it.

On a grass field, a rectangle is marked out with string, about 5m by 10m. Inside the rectangle are six balls, about 20 cm in diameter, three red and three blue, placed at specific locations. There are four players, who start out standing outside the rectangle: three at one of the short edges (marked X below) and one at a long edge (marked O). Here is a very crude drawing. 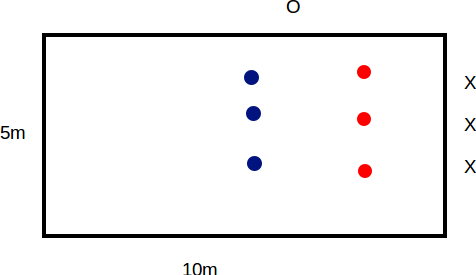 In addition to the four players, there is a fifth person who seems to be a judge.

There seems to be some rules or strategy governing how they do this. The X players can wait for a favorable moment to make their attempt. Sometimes they chose a red ball and sometimes a blue ball; I couldn't tell what was the significance of this choice. Also, sometimes an X player would get a ball and the O player would apparently decide not to try to chase him. It also wasn't clear whether the X players were cooperating or competing with each other.

I saw at least two simultaneous games going on, so I don't think it was just random fooling around. The players seemed to know what they were doing.

What is this game called? Does it have formal rules, and if so, where can I find them?

This sounds like a variant of Boccia, or at least a game being played using Boccia equipment on a Boccia field-of-play.

This sounds like one of the many variations of Dodgeball most probably the "Prisonball" version even though it is difficult to tell form the rough description you gave.

Not the answer you're looking for? Browse other questions tagged international-sports or ask your own question.

13
Identify this Italian sport
7
Which sport is played on this field?
5
What's the name of the sport that has people on bicycles flipping a football with their wheels?