I cannot ever remember seeing a PGA championship course with a par-3 18th hole.

For sake of discussion, let's limit to courses that have been the site of a Major Championship or WGC championship since 1960. Does anyone know of one with a par-3 18th hole?

I am asking this a part of a reference for a question on Game Development regarding the distinction between skill and luck in various games (and by extension sports).

The Tour Championship, final event of the FedEx Cup Playoffs, has been held at East Lake Golf Club, Atlanta, Georgia since 2004. 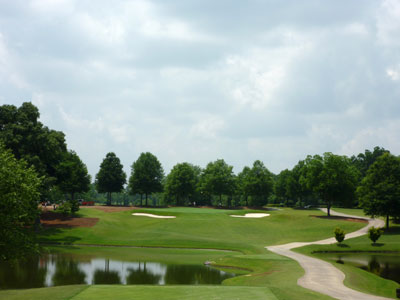 At anywhere between 220 to 245 yards, the final hole is a stout par-3 that will give players in the Tour Championship fits even if they don't have to pull a head cover off a club for the tee shot. Thought it's not the standard length — or par, for that matter — for the final hole of a golf course, East Lake's closer, with deep bunkers guarding both sides of a slick, firm, two-tiered green, is as difficult as it is distinctive.

During the 1995 U.S. Senior Open, it was decided to use the existing par-three 18th for the time, but it was played out of order as the 10th. However, this proved to be logistically difficult, as there was a rather long walk around the lake to get from the 9th green to the 10th tee, followed by another as the players had to double back to get to the 11th tee following completion of the 10th. The USGA broke with tradition for the 1997 U.S. Open, and played the entire Blue Course in its original order and finished with the par-3 18th, which was the first time in history that the tournament had finished on a par-three. [My emphasis.]

The USGA was unsatisfied with their experiment, as most of the drama surrounding the 1997 Open had been decided at the 17th hole. With the creation of the new tour event in 2007 as well as the upcoming 2011 U.S. Open, it was decided to solve the problem once and for all. The club voted to permanently reverse the direction of the 18th hole, and Rees Jones was brought in to design a new par-3, which now plays in the opposite direction to the old 18th. The new hole now plays as the 10th, with the rest of the routing shifted so that the original par-four 17th hole now plays as the permanent 18th. A long walk from the new 10th green to the 11th tee remains, but not nearly as far as the old configuration.

Not the answer you're looking for? Browse other questions tagged trivia golf or ask your own question.