How can a player have more points in race rankings than in the ATP world rankings?

I have noticed that Rafael Nadal had more points in Race rankings than in world rankings in several recent editions of ATP rankings.

When I check rankings breakdown on the ATP website then for the ATP Rankings I see (at this moment): 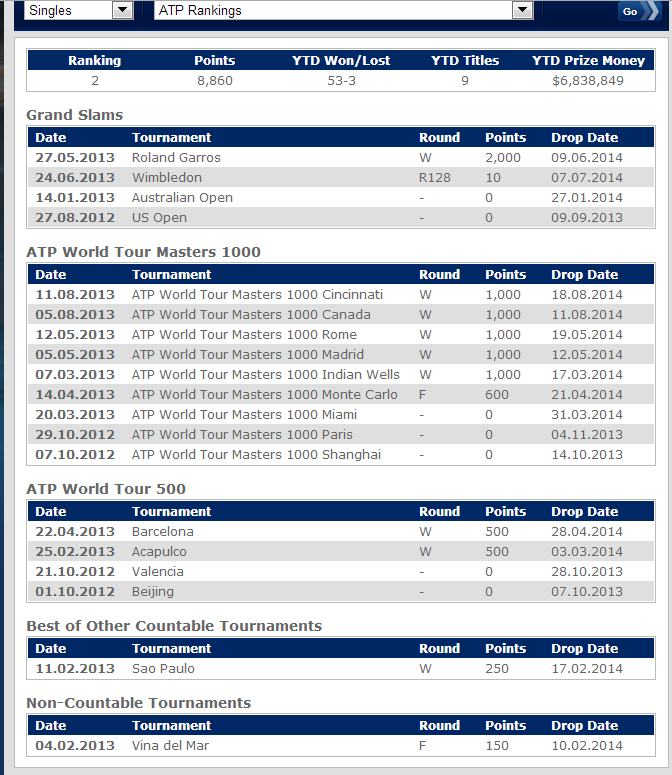 For Race to London I get the following: 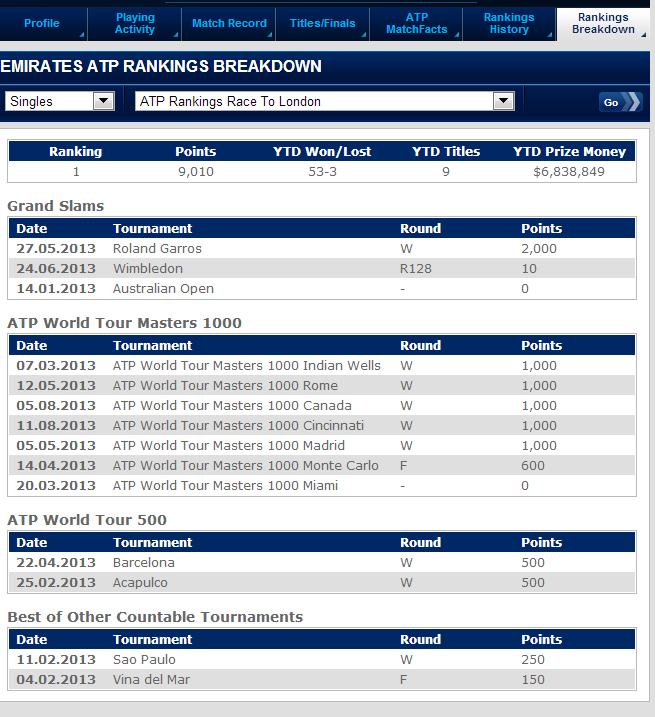 So in this particular case, the difference seems to be that 150 points from the tournament in Viña del Mar in February 2013 are included in Race to London rankings, but not in ATP Rankings.

Maybe the rules about number of required ATP World Tour 500 series tournaments could explain this? According to Wikipedia: It is mandatory for leading players to enter at least four 500 events, including at least one after the US Open; if they play fewer than four, or fail to play in one after the US Open they get a "zero" score towards their world ranking for each one short.

EDIT: Ok, I have completely rewritten my answer now that I understand this completely myself. In my opinion, these rankings being so hard to figure out is one thing that tennis suffers from - the rankings should be easier to figure out and to know "why" someone is ranked where they are. Anyway...here we go. How tennis rankings work:

So, to determine a tennis players ranking, their best 18 tournament results are counted (19 if the player made the previous year's masters cup). 12 of these 18 events are mandatory (4 slams, 8 Masters Series) - they are counted first. This leaves a further 6 tournaments to be counted and they are counted in this order: first, the one optional Masters Series tournament (Monte Carlo), then any ATP 500 level and Davis Cup matches. If there are any countable tournament results left after this, then Olympics (if applicable) and the best ATP 250 results make up the points, until 18 tournaments have been counted (19 for Masters Cup players).

So in Nadal's case (keep in mind he didn't play after Wimbledon in 2012 so he missed a bunch of tournaments), it has to do with this rule, regarding which tournaments can count towards Nadal's ranking, since he is a "commitment player". See the 2nd question on the ATP's rankings FAQ page.

In November 2011, the ATP Board passed a rule to allow more flexibility in which tournaments count toward the ranking of a commitment player in 2012 and 2013.

Commitment players (top 30 in 2012 year-end ranking) can count their best six (6) results from ATP World Tour 500, ATP World Tour 250 and other events (Challengers, Futures, Davis Cup, Olympics) toward their ranking. To count their best six (6), players must have fulfilled their commitment to 500 events - 4 total per year (at least 1 after the US Open).

So what was left out of this explanation was - that UNTIL a commitment player has fulfilled their commitment to playing in four 500 level tournaments for the year (with 1 being post US Open) - they aren't allowed to count points earned at lesser tournaments (such as Vina Del Mar, in Nadal's case). Once Nadal plays in four 500 level tournaments in 2013, he can opt to (but probably won't need/want to) use the points earned at Vina Del Mar.

The commitment for the commitment player is, the singles event of all ATP World Tour Masters 1000 tournaments for which he is accepted, the Barclays ATP World Tour Finals (if qualified as a direct acceptance or designated as the alternate) and four (4) ATP World Tour 500 tournaments, one (1) of which must be held following the US Open. For commitment and ranking purposes, the Monte Carlo Masters 1000 will be included in the minimum requirements for the 500 category. 2013 Davis Cup points may be counted as one (1) of the best of six (6) in the Emirates ATP Rankings, however, it shall not count towards the commitment requirement of a commitment player. See page 184 "Ranking Penalty."

Commitment Players. The year-end Emirates ATP Rankings is based on calculating, for each player, his total points from the four (4) Grand Slams, the eight (8) mandatory ATP World Tour Masters 1000 tournaments and the Barclays ATP World Tour Finals of the ranking period, and his best six (6) results from all ATP World Tour 500, ATP World Tour 250, ATP Challenger Tour and Futures tournaments.

10
When a tennis player comes out of retirement, what happens to their points & ranking
6
Do players get points for matches in Davis Cup and Fed Cup in ATP/WTA rankings
2
ATP/WTA ranking during Grand Slam tournaments
5
Are there any permanent points in ATP/WTA rankings?
6
Will the ATP Year End No. 1 be awarded after the ATP World Tour Finals or the Davis Cup finals?
5
How are points in the ATP/WTA ranking computed in case tournament final is delayed (and finished during the following week)?
5
Ranking from which week are used to decide who qualifies for ATP/WTA finals?
1
Which tennis number one played the fewest tournaments in a year?
5
Del Potro is ahead of Federer in the Race to London, but Federer is the one having qualified