What are wild card standings in NHL?

I have noticed that on the NHL website, starting from this year, there are not only standings in league, conferences and divisions (which used to be there last year, too), but also some kind of ranking which is called wild card.

What are this standings for? How are teams divided there?

After the realignment, the league now consists of 2 conferences with 2 divisions in each conference. NHL playoffs consist of 16 teams fighting for the last two spots to compete in the Stanley Cup Final

The way the new playoff structure works is as follows...

This means that the the 2 wild card spots in the Eastern Conference can consist of one of the following:

The way the seeding now works is...

In the picture below showing the current standings of the Eastern Conference, you can see that the top 2 rows consist of 3 teams for each division. If the season ended today, these 6 teams (3 from the Atlantic Division and 3 from the Metropolitan Division) will make the playoffs.

In the third row, you see a list of every other team in the conference. The top 2 teams in this list are "Wild Card" teams and will also make the playoffs. 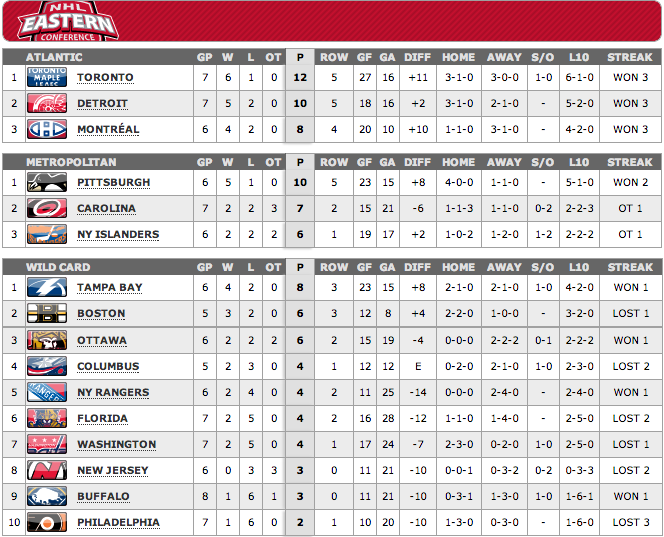 Not the answer you're looking for? Browse other questions tagged ice-hockey nhl ranking or ask your own question.

7
What is tie-breaking procedure in NHL (regular season)?
4
How many times Olympics gold medal winner goalies faced in the NHL playoffs?
11
How can a top seed in a tennis tournament be a qualifier?
4
Which edition of rankings is used for which purpose on Grand Slam tournaments?
4
NHL players making less than NHL minimum?
1
Why did the NHL move to the current playoff format?
3
Boarding, NHL vs USA Hockey
3
How exactly are two teams to be relegated from IIHF World Championships decided?
2
Where do fractional points in UCI ranking come from?