How numbers are assigned to football players?

Usually you can not see any other player with number 1 except goalkeeper. I've never seen forward with number 2,3,4,5 or 6.

So, how numbers are assigned to players?

All I could find out was that this is just a tradition. But no information about how this tradition was formed. Have there been any historical fact of giving numbers in order from 1 to 11 to players from goalkeeper to forward, for example according to a law of game from FIFA or something...

The source of my answer defies summarisation, but in this answer I'll put the current convention. I really suggest reading the source (hopefully still available when you read this) for an interesting history.

Now many teams have adopted following convention for assigning numbers as per player positions. 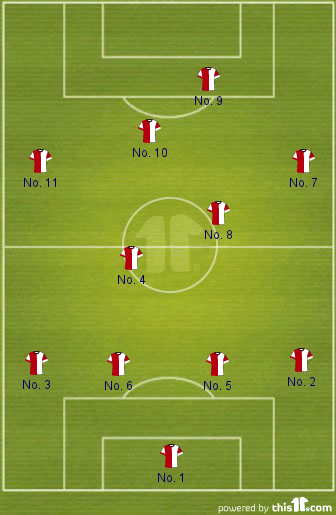 "The Bizarre History of Football Shirt Numbers" by Akshay Mhaskar

Apparently, the numbers were used in football for the first time in 1928, in a match between Sheffield Wednesday and Arsenal. The current, but far from always adopted, convention resembles the then allocation.

NB: For the World Cup 2014, the only rules are that the number 1 must be reserved for one of the keepers and that players are only allocated the numbers 1-23. But note that each competition has specific rules.

Not the answer you're looking for? Browse other questions tagged rules football history or ask your own question.

7
How are football players objectively rated?
7
How are jersey numbers assigned in Cricket?
12
Do teams announce their exact formations before a match?
4
Collapsing of a Maul if the Maul isn't actually formed
4
How many olympic gold medal ties have there been?
7
Offside on purpose
6
Tie breaking in association football championships
3
In football, what happens when a team commits an offence for which play need not be stopped, and then scores a goal immediately after?
11
Can a goalkeeper chip the ball to the head of a teammate from a goal kick to circumvent the backpass restriction?
1
Intentional grounding when receiver has stepped out of bounds