In the NBA, when the ball is in one end of the court, a ball boy usually squeegees the other end. In some cases the ball boy is caught off guard by a steal or an unexpected play and in some cases almost gets in the way of players. Although I have never seen it happen (I'm sure it has), what happens if a ball boy inadvertently interferes with a player?

In the MLB, this same principle happens as well. When a player goes to the side of the field to try to catch a pop fly, sometimes they run into the ball boy. In the MLB, what happens if a ball boy inadvertently interferes with a player?

As you can see in the picture below, this ball boy is interfering with play B.J. Upton. 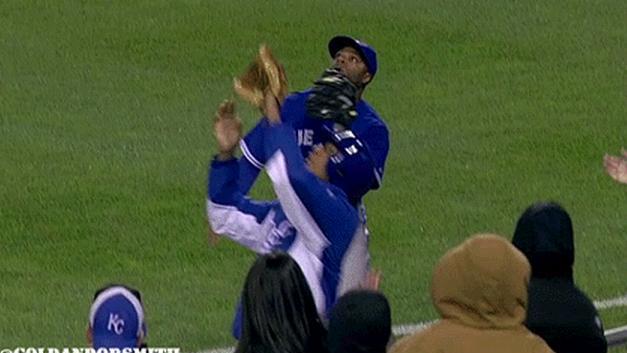 The comments in the official rules also explain what is meant by intentional vs. unintentional actions. It doesn't matter whether the ball boy was actually trying to interfere, it is whether he was acting intentionally in what he was doing. So if he is in the wrong spot at the wrong time and gets hit by the ball or the player, that is unintentional.

In the case of the example photo you posted, he is trying to catch the ball, and that would be considered intentional. In that game, it actually turned out that the ball boy missed the ball, the player did not collide with the ball boy, and the umpire did not call interference.

3.15 No person shall be allowed on the playing field during a game except players and coaches in uniform, managers, news photographers authorized by the home team, umpires, officers of the law in uniform and watchmen or other employees of the home club. In case of unintentional interference with play by any person herein authorized to be on the playing field (except members of the team at bat who are participating in the game, or a base coach, any of whom interfere with a fielder attempting to field a batted or thrown ball; or an umpire) the ball is alive and in play. If the interference is intentional, the ball 28 Rule 3.10 to 3.15 shall be dead at the moment of the interference and the umpire shall impose such penalties as in his opinion will nullify the act of interference.

PLAY: Batter hits ball to shortstop, who fields ball but throws wild past first baseman. The coach at first base, to avoid being hit by the ball, falls to the ground and the first baseman on his way to retrieve the wild thrown ball, runs into the coach. The batter-runner finally ends up on third base. Whether the umpire should call interference on the part of the coach is up to the judgment of the umpire and if the umpire felt that the coach did all he could to avoid interfering with the play, no inter-ference need be called. If, in the judgment of the umpire, the coach was attempting to make it appear that he was trying not to interfere, the umpire should rule interference.

Not the answer you're looking for? Browse other questions tagged rules mlb nba or ask your own question.

4
Contact of a player with the net
5
What is the MLB record for the most errors by a single player on a single play?
7
MLB: Gray area concerning runners passing each other rule
6
What happens if the ball returns to the player's side of the court in tennis?
3
Umpire induces appeal play?
3
Appeal play after a pitching change
5
Wording in MLB slide rule
1
Fair or Foul Ruling?
3
What rules govern touchdowns/touchbacks if there is a fumble involved?
3
What happens after the penalty if a player is snookered behind a free ball?