Origin of this generic hockey photo

In my experience, whenever some group, company or organization wants to feature an image of hockey in their print or display media, they use the generic image below that seems to come from an actual game.

I'm very curious about the real origins of this image - where it was taken, who's in it it, etc - and how it became a de-facto image of hockey. Does anyone have any idea? 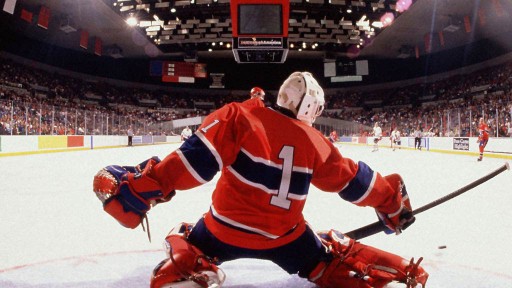 I'm almost positive that this team (in red) are the Spokane Chiefs from the WHL. The jerseys match exactly along with the pants. I looked through the leagues of CHL, WHL, QMJHL and AHL and these were the only jerseys that match.

As you can see by the first picture below, the stripes on the jersey match up exactly. If you look in the original photo (with the goalie) you can see a faint blue and white logo on the front of the the other players jersey, this matches the colors of the Cheifs logo.

As you can see from the 2nd photo, the 2 white and 1 red stripe down the leg matches the goalie as well.

As for who the player is? That is hard to figure out. The WHL only keeps roster records back to 1996. After going though all these rosters and looking at goalies who wore the number "1", I came up with this list. 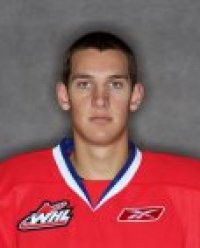 After further digging, I'm also almost positive that Spokane Chiefs were playing the Portland Winterhawks. I came to this conclusion by looking at the arenas that the teams in the WHL play in. On this certain game, the Chiefs were playing AWAY but wearing their HOME jerseys. Sometimes this happens in hockey (another question to be asked in the future).

The first reason why I came to this conclusion is the look of the arena. If you compare the given picture with the picture below of the Memorial Coliseum, the arena that the Portland Winterhawks play in, you will see many similarities. 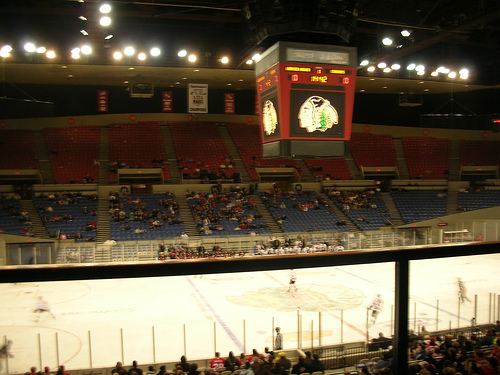 Last but not least, the Portland Winterhawks AWAY uniforms are made up of an almost all white jersey and solid black pants, as you can see from the picture below. If you compare this jersey with the one you see of the opposing players in the picture provided, these jerseys match. 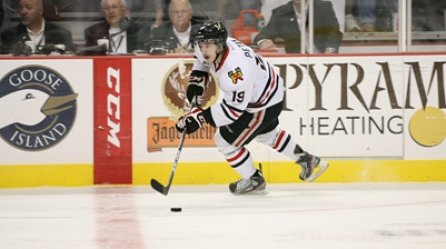 Not the answer you're looking for? Browse other questions tagged history ice-hockey or ask your own question.

13
Which athletes were the first to break the color barriers in hockey?
8
Hockey Players Introduced After a Game
12
Origin of the term “Heavy Ball”?
8
Why does Ice Hockey have 3 periods?
21
Really Fat Hockey Goalies
6
Reason behind curved hockey stick?
5
Origin of the 3rd Down “noise”
7
Why is fighting tolerated in ice hockey?
2
USA hockey rule - Cross Checking