Is is possible for the puck to hit a side post and still completely cross the goal line?

Let me preface this question by stating that I'm a youth hockey ref, and we don't have video goal review in our games.

I had a situation the other night where a shooter fired a shot from about midway up the inside of the circle nearest to me, it hit the post nearest to me, and bounced out at an angle of (about 60 degrees) to the other side. 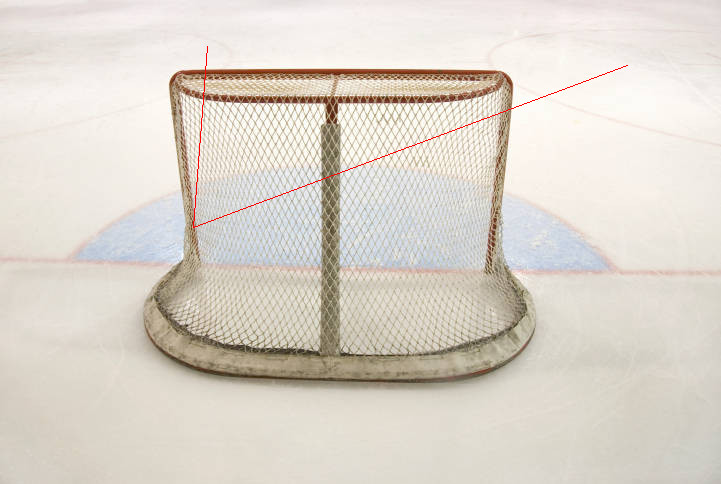 So, my question is whether or not this is physically possible. In this particular situation, the goal post is itself wider than the goal line by probably almost an inch, so my suspicion is that, if it hit the inside corner of the post, it could bounce out at the angle we saw and still have completely crossed the line.

Obviously, this seems like it would be extremely rare, so whether or not I made the correct call is totally different, but I'm wondering about the physical potential for this to have happened.

The goal line on a standard rink is 2" and the dimensions listed on NHL.com for the diameter of a goal post is 2 3/8". Given a flat shot with the puck diameter of 3" and assuming that the dimensions were the same on the rink you were on, I think it would be impossible for the puck to hit the post and come out while completely crossing the goal line.

The only part of the post which is completely in the net is the last 3/8ths and for the puck to hit that part while being completely over the line and ricochet out, it would have to be shot from inside the net.

P.S. As the back 3/8" of the post is in the goal (see answer referred to above), technically it's possible for the puck to be in the net at the time it strikes that part of the post at just the right angle. This would only be visible via a perfectly-positioned high-speed camera. The puck could still not then proceed out of the goal on its own.

Not the answer you're looking for? Browse other questions tagged ice-hockey or ask your own question.

5
What percent of shots on goal hit the crossbar in hockey?
7
When playing ice hockey and giving a pass at the blue line, who should go first?
6
Is an NHL defender credited with a block if the puck still enters the goal?
2
Puck completely crossing the goal line for a legal goal - does it need to be placed to settle beyond the line too?
2
For a goal while there's a change of players, who gets the +1/-1?
2
If 2 penalties are called on the same play, and a goal is scored in the following 3v5; who comes out of the box?