What tie-breaker is used in the ATP ranking, when two players have the same number of points?

If two players have exactly the same number of points in the ATP ranking, what further criteria are used to determine which of them will be higher in the ranking?

I am aware of the fact that this is not very probably to happen among top players, where the point differences are larger, but this is bound to happen for players with lower rankings and less points. 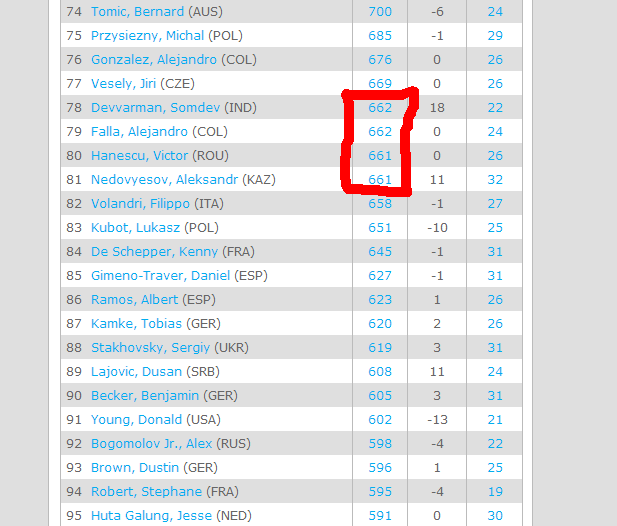 E. Ties. When two or more players have the same total number of points, ties shall be broken as follows:

2) the fewest events played, counting all missed Grand Slams, ATP World Tour Masters 1000 tournaments and Barclays ATP World Tour Finals they could have played (as described under A. above) as if played, and if still tied, then,

3) the highest number of points from one single tournament, then, if needed, the second highest, and so on.

For example, let's look at the players currently ranked #78 and #79. Both Somdev Devvarman and Alejandro Falla have 662 total points. So the first tie breaker is the total points from Grand Slams, ATP World Tour Masters 1000 and the Barclays ATP World Tour Finals. This information is available on the ATP site:

In the tie breaker, Devvarman has 195 points, and Falla has 155 points, so Devvarman is currently ranked ahead of Falla.

2
What does T mean in ATP rankings

11
How can a player have more points in race rankings than in the ATP world rankings?
5
Do players get points into ATP ranking even for matches in qualifying rounds
2
ATP/WTA ranking during Grand Slam tournaments
3
Is it possible to enter junior tournament based on ATP/WTA rankings?
5
How are points in the ATP/WTA ranking computed in case tournament final is delayed (and finished during the following week)?
4
Which edition of rankings is used for which purpose on Grand Slam tournaments?
6
How are doubles seeds calculated?
5
Climber or Points rankings leader not finishing Tour de France
2
Why did Hapoel Be'er Sheva go through over Southampton in UEFA EL 2016-'17?
2
Where do fractional points in UCI ranking come from?