All (or at least almost all) tournaments at ATP level have a qualifying competition, from which players can get into the main draw.

Do players get some points if they win a match in the qualifying rounds? If not, do at least winners of the qualifying get points? (IIRC the players who enter main draw get points even if they are defeated in the first round already.)

The exact quote from rulebook is this:

Players qualifying for the main draw through the qualifying competition shall receive qualifying points in addition to any points earned, as per the following table, with the exception of Futures.

I am not sure whether I understand this correctly. Is this the number of points that a player who qualified to the main draw receives? (In addition to the points he receives from the competition.) So the players who do not qualify do not receive any points?

Yes, players can receive rankings points for winning qualifying round matches. The amount of points they win typically depends on how many matches they win and what level of tournament it is - a 250, 500, 1000 (Masters) or 2000 (grand slam).

I think that it might be useful to illustrate this also with examples.

At 2014 BMW Open it was possible to get 250 points for winning the tournament. Winning qualifying meant 12 points. (It is a part of the ATP World Tour 250 series.) Martin Kližan won both qualifying and the whole competition.

He got for this tournament 262 points, as you can see in his ranking breakdown saved in internet archive and in the following screenshot 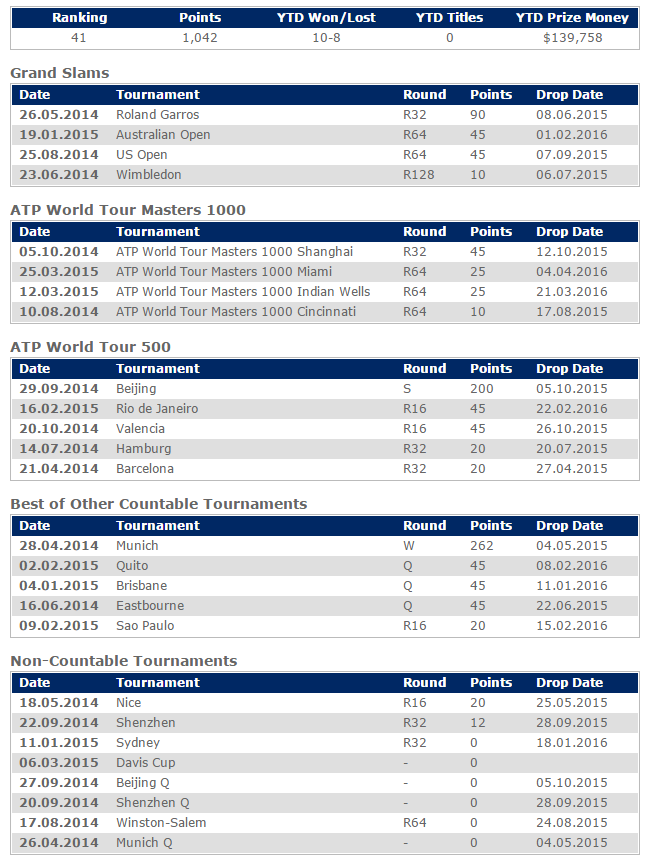 10
When a tennis player comes out of retirement, what happens to their points & ranking
10
How can a player have more points in race rankings than in the ATP world rankings?
6
Do players get points for matches in Davis Cup and Fed Cup in ATP/WTA rankings
11
How can a top seed in a tennis tournament be a qualifier?
3
Is it possible to enter junior tournament based on ATP/WTA rankings?
5
How are points in the ATP/WTA ranking computed in case tournament final is delayed (and finished during the following week)?
6
Ranking points for a player who received bye
4
Which edition of rankings is used for which purpose on Grand Slam tournaments?
6
How are doubles seeds calculated?
5
Ranking from which week are used to decide who qualifies for ATP/WTA finals?