How does a golfer's follow through affect a golf ball's flight?

Tiger Woods has promoted swinging with a high follow-through and a "fuller finish" to hit a high shot. Here's a video example of Woods hitting a full shot from the fairway. 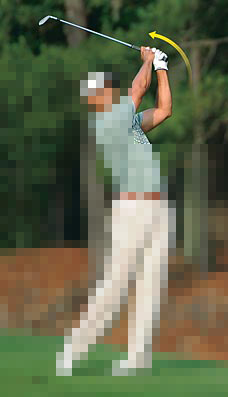 Also, he abbreviates his follow-through and finish to hit a low shot, in which he refers to as his "stinger." Here's a video example of Woods hitting a low shot under the trees. 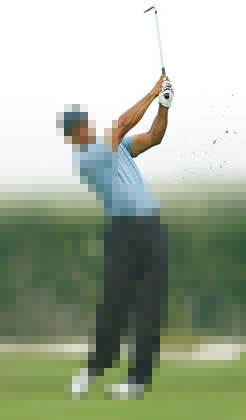 The follow-through, in itself, has no bearing on the shot shape, especially with irons when you tend to tee the ball further back in your stance; for those shots, the ball is long gone before the clubhead begins to rise out of the turf. However, the mentality inherent in adopting a particular follow-through can cause a player to adopt certain changes in swing mechanics that do affect the portions of the swing prior to impact.

For instance, a mentality to abbreviate your follow through will cause you to lead more with your hands so you can control the club, and you'll feel like you're not "breaking" your wrist to release the clubhead until after the ball's already gone. In reality, you end up releasing the clubhead just before impact, so your hands are still a little out in front, de-lofting the club at impact. You also do one or two other things; keeping your hands in front means there's more distance between your hands and the ball at impact, and that can cause you to hit the ball "thinner", toward the bottom edge of the clubface, which causes a lower launch. Or, the additional bracing of your arms in anticipation of controlling the follow-through will cause you to stand up slightly on the downswing, and that also causes a thinner, lower-launch shot.

By contrast, focusing on taking a relaxed, full swing and follow-through will lead you to release the clubhead earlier, so the clubhead's inline with your head and hands at impact. That decreases the distance between your hands and the ball so you hit higher up on the clubhead, and lofts the club a little more, both causing a higher launch.

13
Stomping after a table tennis serve or follow through?
7
How can I correct hooking my driver?
20
How can I get started in golf?
8
How does golf technology compensate for the "groove rule" for golf clubs?
5
Does course length correlate to the difficulty of golf courses?
4
Eyes in the contact point during follow-through?
1
How many rounds of golf does the average golfer play?
5
Does anyone else modify their golf grip on a per shot basis?
6
How does handicapping work in "social" games of golf?
4
In golf, does the club shaft increase clubhead speed through shaft flex?