"Pressing high" in football (aka "soccer")

I've heard the term "press high" repeatedly while watching the World Cup. What does it mean? Do teams that press high generally enjoy more possession or less?

It means the team without the ball, moves higher up the pitch to put pressure on the team with the ball, with the idea of getting the ball back or forcing the other team to make a mistake.

As shown in the image below, blue team tries to pressure the red team, near the red team's goal. 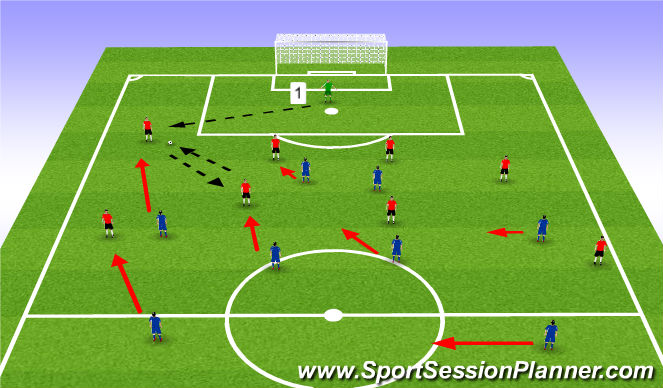 Few benefits of pressing high are:

A disadvantage would be, you are more susceptible to quick counter attacks, and over the top balls.

Not the answer you're looking for? Browse other questions tagged football terminology strategy or ask your own question.

11
What is seedings in grouping the teams in cricket?
7
What does "throw" mean in badminton?
10
New soccer ball for 2014 World Cup
8
What is an inverted winger?
6
What is the statistical disadvantage of playing a man down?
10
Are football/soccer players paid for national team appearances?
2
Is it true that Brazil made 1 billion dollars from the world cup?
6
How many head coaches/managers in women's football are women?
2
What is the term for an athlete's headshot?
4
How many potential different endings are there for a football match?