Football penalty shootouts: Germany wins 71% of the time, England 17% only. Any reason?

See the same question posted by me on Quora.

I was surprised to read the following statistics regarding the success rate of national teams in football penalty shootouts: 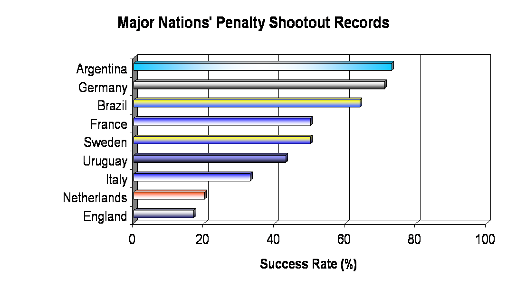 The data was taken from the following competitions:

Is there any reason that explains such a discrepancy between teams? I would have expected the distribution to be much more uniform, as I felt that professional players would be trained pretty much the same around the world when it comes to kicking penalties.

The results, as presented on the webpage, are not that surprising. I downloaded the chart of all countries and ran a histogram of the performances (discounting countries that only had 1 or two shootouts, as they are a very small sample size). 54 countries had participated in 3 or more shootouts and here is the histogram. 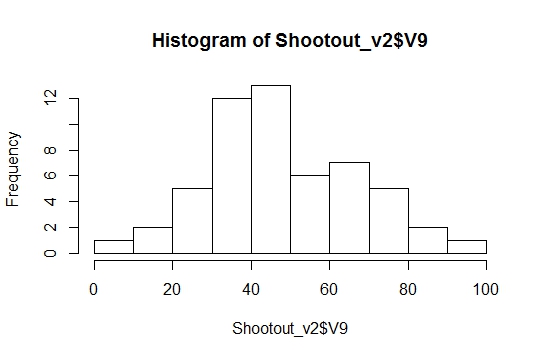 The standard deviation of this set is 19.9 and the mean is 49.17. This means that if we randomly selected some countries from the list, we would expect approximately 2/3 of them involved to fall between a 30% and 70% win rate. Of the countries you listed, 5 of the 9 fall within that range (and Germany is just outside it), so that's about on par.

So what does this mean? It seems to imply that penalty shootout results are somewhat random, even for teams from "Major" nations, as they closely match up with what we might expect from a random selection of countries.

Here's a decent FiveThirtyEight article about extra time and penalties.

The first penalty shoot out that England had was against West Germany at Italia 90. England of course lost.

Peter Shilton was the England keeper, who at exactly 6 foot tall is smaller than most keepers. His tactic in that penalty shoot out was to dive after the ball had been struck (rather than the usual method of picking a side). He dove the correct way each time but was nowhere near any of the penalties, all of which were well struck, all in the corners.

Meanwhile the German players had been regularly practising their kicks, just in case any of their matches went to the shoot out (still a rarity in those days). The English players however hadn't really been practicing.

This set the precedent which is always easier to repeat a second time, especially with the media and it's constant reminding of the previous FAILURE (Waddle and Pearce suffered in the red top press creating a venomous fear of failure for all future shoot outs), and the publics celebration of FAILURE (pizza hut?).

Future penalty shoot outs after this were very easy to predict as losses (check out the players body language - compare this to their opponents), where players such as David Batty (who had never taken a penalty in his career before) helped fuel the media's (and that of the public's conscience) self fulfilling prophecies of penalty shoot out defeat.

But why did he (and others that weren't particularly skillful such as Gareth Southgate) take them? They volunteered, where other players of far superior ball control turned away. They were too worried by failure, driven by the culture nurtured by the media and public. (Batty and Southgate, although good players performed a role within the team, and that role wasn't clinical finishing).

England have won a penalty shoot out, against Spain at Euro 96, which was held in England (incidentally only a dubious refereeing decision kept England in the game). Buoyed by immense jingoism and support, the like of which I've never seen before or since.

Additionally until recently many of the senior management in the F.A. had failed (the archaic Taylor Report springs to mind) to embrace some of the more scientific approaches to football (managers like Arsene Wenger helped change this attitude) and the penalty shootout. See the book SOCCERNOMICS for detailed information. (how an economist would approach a penalty shoot out - and how they successfully predicted where the keeper should dive for the shootout in the Champions League final of Chelsea vs Man Utd).

I can't really comment on other countries relative success or failure in shootouts, and I don't want to mention national stereotypes, but if only everything in life was as reliable as a........

My best answer would be that German players are more mentally tough. I would imagine if you looked back and the individual shoot-outs that a large percentage of England's losses came after one or more players missed the goal entirely with a shot off-target. PK's are more of a mental trial than physical.

As a soccer fan, I'd like to believe it has something to do with national culture or identity but given the small sample set and the increasing internationalization of soccer, it probably is just random. There are some strategies and techniques that do better than others though. Long run-ups to the ball are better than short. As a goalie, standing still and guarding the middle of the net is statistically better than guessing one side and diving. Practicing shoot-outs a lot between games is better than ignoring them.

Not the answer you're looking for? Browse other questions tagged football statistics penalty-shot or ask your own question.

4
Why does England have 8 places in Europe while Spain and Germany only have 7?
2
Can the referee stop play for an injury or any other reason?
8
Penalty kick after time expires - should the referee play rebounds on for longer?
6
What is the most penalty kicks missed by a football team in one game?
1
Tie breaker rules during penalty shootouts, when the lighting is poor
4
If Arsenal wins the 2019 UEFA Europa League final, which teams will represent England in the Champions League next year?
6
Is penalty success rate increasing over the time?
1
Are there any situations in football where the clock would be stopped? (except half and full time)