How can I recognize what formation a soccer/association football team is in?

When watching soccer on TV I often hear the commentators say stuff like, "They've come out in a 3-5-2, not their usual 4-4-2 in the hopes of ..." or "they've got so-and-so acting as 'false 9' today." How could I recognize these strategies myself?

The easiest way is to watch the pregame show. Usually about 5-10 minutes before kickoff they will show the two teams and their formation on the field. This can also be a good way to familiarize yourself with different players.

If you miss the pregame show and are just watching the run of play, it can be tougher, but still possible. Formations are always described defense-to-offense (excepting the goalkeeper). So a 4-4-2 means 4 defensive players, 4 midfielders and 2 attackers.

This is not completely accurate, as people will play where needed during the normal run of play, but it will at least get you an idea.

Secondarily, you should also pay attention to the style of play and who's passing to who. If a team has a lot of possession, you can usually tell who is playing in the same line by where the passes are going. If player A and B send a lot of passes laterally to each other, and sometimes backwards to player C, then A and B are probably midfielders and C is probably a defender. Again, not 100% accurate, but can give you an idea.

The last thing to do is familiarize yourself with some common formations and how they are different from one another. For example, a 4-5-1 can look very similar to a 4-3-3 but the style of play is much more on the attack in a 4-3-3 and more on the counterattack in a 4-5-1.

Here's a good site that lists a bunch of formations (some common, some not so common) and how they're typically used:

For me every formation can be traced back to one of the two basic formations: 4-3-3 and 4-4-2. All the other formations are just another interpretation of player roles here, or just another way of setting the players (for instance, playing with a defensive midfielder instead of a attacking midfielder).

This in my opinion makes a lot more sense since a team always has to react on situations during the match. An example: Real Madrid mostly plays a almost classis 4-3-3 formation, with Marcelo as their left full-back. In the Primera Division, Real is almost always the better team, resulting in a lot of possesion, so Marcelo can stand much deeper (almost playing as a midfielder or even a winger). But when Real is playing against Barcelona, we mostly see Barca in possesion, so Marcelo has to think defensively more and thus will stand less deep than when having much possesion. You see that in this case, the formation in possesion can almost be described as being a 3-4-3 formation, while not being in possesion yields a 4-3-3 formation. 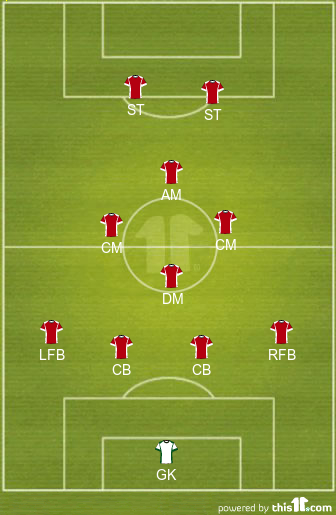 Here we see the standard 4-4-2 formation. We see that the midfielders are all close to the center of the field, so only the Wing Backs occupy the wings. This formation is useful for 2 different tactics:

Now, if we want to transform this 4-4-2 to a standard 3-5-2 we only have to move some players. First, and most important, one of the Center Backs is re-positioned as a Defensive Midfielder. This causes a big gap in the center of the field, which is catched by moving your Full-Backs closer to the center (they're actually becomming normal backs now). The last problem that has to be catched now is the center midfield, which is to heavily occupied. We catch this by moving the 2 Central Midfielders to the wings. Now our standard 3-5-2 is created: 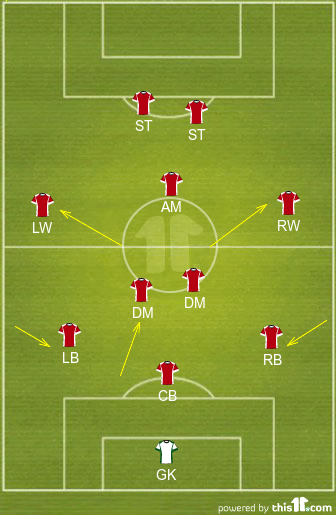 This is just an example. You could for instance also transform a classic 4-3-3 into a 4-2-3-1 formation. (e.g. moving your wingers back a bit, and play with a attacking midfielder).

So, in the end we can actually state that a real formation doesn't exist, it all is about the overall tactics and players that are used in the tactics. The only way to really learn how a team plays is watch it often.

Not the answer you're looking for? Browse other questions tagged football strategy formations or ask your own question.

15
How do defenders score goals when part of a formation
13
What are the advantages/disadvantages of the triangle formation?
5
Zonal marking vs man marking
4
Is it OK to cut a player from a rec level football (soccer) team?
5
Why do football teams announce their formation before the game starts?
6
What makes Stealing Signs wrong?
8
In football is it possible for a team to change team formation during a match?
1
Why do coaches reveal the actual formation of their squad in association football?
4
Why is the ball hitting any part of the arm now a handball?
0
Which soccer/association football statistic gives the most comprehensive assessment of a player in his or her position?