Handicap is tee-based or just man/woman?

I am ultra-beginner to golf and trying to develop a mobile application around it. I am trying get along with golf game and scoring rules, I have few doubts so posting away my first of series of questions. Looking forward to your helpful responses just like in other stack exchange networks.

Is handicap defined according to tee or according to man/woman. I read somewhere that course handicap is different for different tees, is this correct? Or its different for man and woman only but same for all tees. I drew this conclusion from this sample data http://golftraxx.com/view_scorecard.php?course_name=Heather+Gardens+Golf+Course&zipcode=80014.

You're confusing a few things, which is natural.

First off, understand that there are two officially-sanctioned ways to score golf in individual play; stroke play and match play. In stroke play, every stroke you take is added up to your final score, allowing you to compete against any number of people including your own past scores. Most rounds of golf are scored this way. In match play, you compete directly against one or more people during the round for the best score on each hole, and you win, lose or "halve" the hole; the person with the most won holes wins the match. This can be used for friendly competitive play in pairs, and also to play for money such as in "skins" games.

So, the handicap system for golf has to be able to be used for both methods of scoring. This is done by applying the handicap in different ways. In stroke play, your own handicap is simply deducted from your raw total score (the sum of all strokes made and all penalty strokes) to produce your final score. So, if you're just going out to see how you hit 'em, all you have to know is your Course Handicap, which itself is complex to calculate according to the Rules (because it's designed to facilitate applying a handicap to a course you've never played, based on your play on other courses which might be more or less difficult), but you usually get close enough just averaging the number of strokes over par of your last few rounds at a course.

For match play, it's a little different. First, you have to know both yours and your opponent's Course Handicaps, because it's the difference between those two that will be applied. Let's say you're playing me, and you have a 19 'cap while I have a 26 'cap (I wish). That gives me 7 handicap strokes for this round. I assign those strokes, one at a time, in the order of the holes' Handicap ranking; the hole ranked 1 is the most difficult to score par on, while the hole ranked 18 is the easiest. So, on the 7 most difficult holes of the course, I would either deduct one stroke from my score for that hole, or add one stroke to yours, before comparing scores to determine who has won that hole. 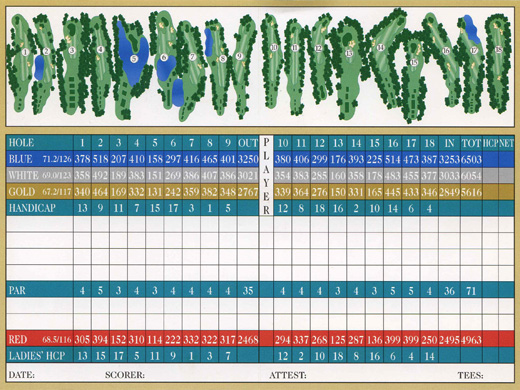 The line titled "Handicap" contains the difficulty ranking of each hole on the course as played from the Men's or Senior's tees (Blue through Gold on this card). Hole 8 is the most difficult; it's the longest par-4 on the course, requiring a long iron or wood shot from the fairway to make green in regulation (in turn requiring you to avoid the fairway bunkers), with water bordering the hole on the left side on approach. Hole 12 is the easiest; the second-shortest par 4, and with no water and minimal hazards (one approach bunker).

The Ladies' tees are typically placed much closer to the hole, especially on longer par 4 and 5s, to compensate for reduced drive distance between men and women, and that can make certain holes easier than they would be from the Men's tees. So, the Ladies' tees have their own handicap ranking, seen on the line under the distances for the Red tees (traditionally the Ladies' tees). For ladies, Hole 7 is the hardest on this course, because it's the second-longest par-4 as played from the reds (and only by 7 yards), and has water (though easily avoided, unless the hole severely slopes toward the hazard). Hole 13 is the easiest; par 3, no hazards, and the distance is somewhere in the mid-irons for most women.

So, assuming you and I are both male golfers playing the course this card is from, with the handicaps stated above, I would add one stroke to your score (or deduct one from mine) when we played holes 4, 7, 8, 9, 14, 17 and 18.

Now, I may not need those handicap strokes on those holes. For instance, I may have it together on hole 8, and birdie with a strong drive, accurate long iron or fairway wood approach and a one-putt, while you either two-putt it for par or have to make an up-and-down with an extra fairway stroke, so I would have won the hole without the handicap. Meanwhile, back on hole 5, I hit one in the lake and double-bogied, but you three-putted to win by one stroke. In that situation (or any other), I can't apply my handicap stroke on 8 to hole 5 to halve the hole; I just have to take the loss of hole there and do better on the next few to make it back up.

Now, all of that is in applying the handicap in stroke play versus match play. I skimmed over calculating the handicap to apply to a course in my original answer, but that also has a bearing here. Again, looking at the title for each tee on the example scorecard, you will see two numbers separated by a slash. The first number, the decimal, is the Course Rating. This number is essentially the average expected score for a "scratch golfer" playing this course from this tee, and it can be calculated based on recent real plays of the course from that tee by scratch players, or in the absence of enough good real data, it can be estimated based on the abilities of a hypothetical "scratch golfer" playing from that tee.

The second number is the course's "Slope Rating". Basically, think of it as being a measure of how much more difficult the course is for high handicappers than scratch golfers. Courses play differently for golfers of different abilities; a course with long fairways and a lot of lateral water hazards doesn't play much differently for a scratch golfer, because he'll have the long, accurate drive and fairway shots to send the ball down the middle of the fairway and get to the green "in regulation". But, it can make for a really long day for a "bogey golfer" with a short drive and a stubborn slice who keeps putting it in the water and takes more than par just to make it to the green. Conversely, a course might have nice wide fairways, but pockmarked with hazards right in range of the scratch player's average drive; so, he either has to play better than average to carry over the hazards, or lay up short of them and possibly take an extra stroke to get on the green. The bogey golfer, however, wouldn't be bothered by the hazard since he would never be able to drive far enough for it to be a problem, so the course actually affects the scratch golfer's game and score more than the bogey golfer's.

To account for all these variations in course difficulty and player ability, without requiring the player to have recently played a number of rounds at the course to calculate a course-specific handicap, the USGA uses a "Handicap Index", which averages a number of normalized, adjusted "Handicap Differentials" recorded from past plays.

Your Handicap Index is calculated by starting with the raw score of your most recent 20 games played by "strict rules" (or however many you have; you must have at least 5). You can make a few sanctioned adjustments to those scores to mitigate really bad out-of-character scores or to compensate for deviations from struct rules such as mulligans. This gives you the Adjusted Score. Take the lowest 10 scores (if you have 20 recent plays; if you don't, you use a reduced number that can be produced by the Excel formula =CEILING((A1-4) * 0.5 + ((A1-16) * 0.5 * (A1>15)), 1) where cell A1 contains the number of rounds played). For each of these, subtract the Course Rating from the score, multiply by 113 (the average slope rating of all USGA courses), divide by the Slope Rating for that round, then multiply again by .96 (an "Excellence Factor" that reduces the advantage of a high handicap, forcing high 'cappers to drop more strokes from their average game to beat a low capper, thus improving their cap) and round to the nearest tenth to produce the Handicap Differential for each of the rounds. Average these Differentials together (a spreadsheet program really helps out here), round to the nearest tenth, and you have your Handicap Index.

To compute your Course Handicap, simply multiply by the Slope rating of the tee box you're about to play from, then divide by 113, and round to the nearest whole number. Why isn't Course Rating used here? Because a "scratch golfer" would expect to score the Course Rating, so it wouldn't be fair if your handicap got you to the course par which can be up to 6 strokes below the Rating of more difficult courses.

So, your Course Handicap is dependent on the tee you hit from, not only in the current round but your past 20 rounds (or however many you've played). How it is applied to the play of a round, however, does not.

Not the answer you're looking for? Browse other questions tagged rules golf or ask your own question.

4
“Lower score than you actually shot will disqualify you” in Golf? What does this mean?

9
When should I use a longer tee vs a shorter tee?
10
Foosball five-man wall bounce rule
4
Declaring Man of The Match and Man of the Series/Tournament Award
5
Twelfth man in cricket
1
Criteria for Man of The Match in Cricket
9
Is hiking the football required or just a good idea?
6
Can a woman feature in EPL?
3
Does “Strokes Gained: Tee-to-Green” objectify tee-to-green performance?
2
Word for: player who's just helping field a team
1
12th Man in 2019 Ashes