How to brake in rollerblade?

I just began rollerblade, or inline skating. After tried it twice, now I can skate on the pavements in a park nearby (I choose late night to avoid pedestrians). However, I don't know how to brake without using the brake at the heel of the right boot.

I've checked on wikihow, it says: 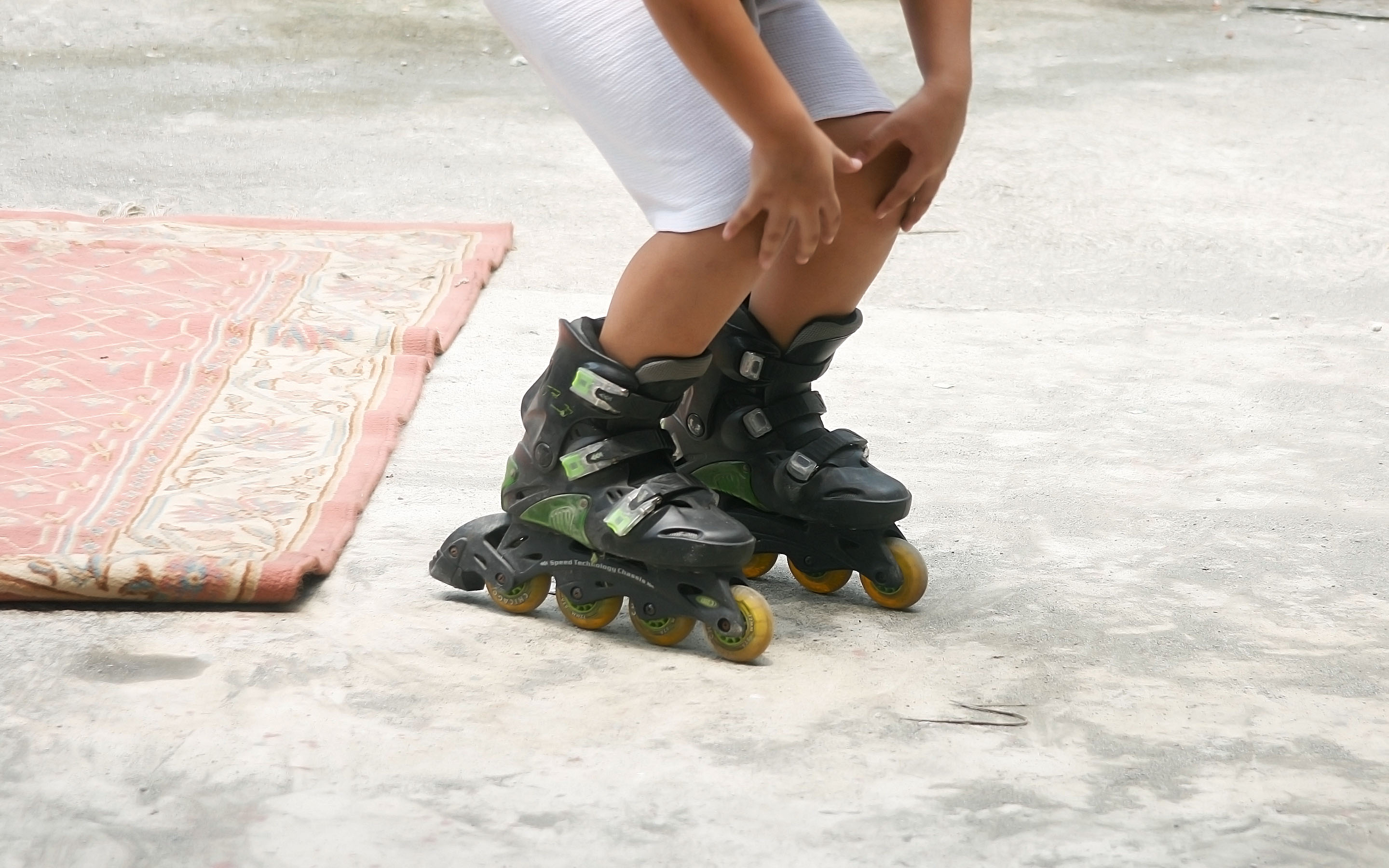 Learn to brake. Just like driving a car, riding a bike, or even running, anticipate where you want to stop. Move one foot forward and bend the knee slightly, applying pressure on your heel until you slowly come to a complete stop.

This is to use the brake at the heel of the right boot, isn't it?

However, seems all advanced rollerblade skaters take off the brake at the heel of the right boot? At least is what I observe from youtube videos, people stand on one foot, and brake by using another boot's side or tip.

But the skills are a bit too advanced for me. When I try to place the two feet as a "T" shape, I always go sideways. Should I just practice more, or there's some trick?

I'd like to seek some advice. Just to summarize my questions:

Q1: Is it true that advanced rollerblade skaters take off the brake at the heel of the right boot (and brake use other ways)?

Q2: After taking off the brake at the heel of the right book, is there an easy way to brake ? e.g. "T" shape? If so any suggestion to practice?

Q3: After taking off the brake at the heel of the right book, what are the different ways to brake ? e.g. which one is faster, which one is safer...?

Stopping is a crucial skill in skating. Inline skates generally come with a removable heel brake on the right skate. The advice on skating that you quoted from WikiHow does indeed refer to using the heel brake for stopping.

Advanced inline skaters usually remove the brake. There are a couple of reasons for this. The brake can often get in the way of tricks. The primary reason, though, is that stopping with a heel brake is not a very fast way to stop. There are other ways to stop that are much faster.

The T Stop is one of those ways. When practicing this stop, it is helpful to start skating from the T position. Push off of your rear skate, then immediately use the rear skate to stop. By practicing this, you've eliminated one of the steps of the stop, which is getting your braking skate into position. After you've practiced starting and stopping while in the T position, you can work on skating normally, then moving your braking skate into position for the T Stop. When you first get into the T shape, keep your weight on the front skate, and very gently transfer some of your weight to the braking skate. If you find yourself spinning sideways, perhaps you are putting too much weight on the braking skate too early.

The beginning of this video discusses practicing the T Stop: How To Practice The T-Stop On Rollerblades.

This video discusses what to do if you are spinning while stopping: How to do a T-Stop on inline skates

Using a heel brake is probably the easiest, but slowest, way to stop. The Hockey Stop is one of the fastest ways to stop.

There are other stops, as well. For example, here is a video that demonstrates the Plough Stop: How to stop without a brake using the Plough Stop on inline skates or rollerblades.

Yes, the wiki is talking about the heel brake. The first thing I would advice is remove the heel brake(s). Learn to brake without. Reason being: It can get stuck behind things. If you plan to learn any other discipline like aggressive rollerblading, you really don't want to try dropping in a ramp with that heel break still on your skates. Learn to brake 'properly' from the start.

I made the error skating a long time still with these attached. The moment I removed them, I almost had an accident because I wasn't used to it. I panicked and I wanted to slow down but I forgot I removed it some hours before I went blading.

Brakes ordered by times that I actually use them:

One foot behind the other in a 'T' like position. Pros: Easy. Usable at every speed. High controlability. Safe! Cons: Your wheels won't last long if you brake frequently. Don't forget to switch them up from time to time that both sides wear down at the same rate.

You were talking about going sideways when attempting this stop. Bend your knees (always..in every circumstance). Put your hands in front of you. Imagine that you are holding a joy stick. If go sideways to the right, move the 'joystick' / your hands to the left and the other way around. Also, if you are still having trouble, learn to skate on one foot as long as possible first.

I struggled long to get this one right, it's practically putting one foot in the opposite direction of your other foot and making a u turn, which will slow you down pretty hard. Really hard to explain in words, this is the best video I could find: Turn Stop Pros: Doesn't wear your wheels down. Good for braking at slow speed. It's fun. It's also a nice way to turn at slow speed. Cons: Don't try this at high speed. Hard to learn.

This is actually a reverse T Stop. There are two ways, you can do a 180° (jump and land facing backwards) or turn smoothly into a power slide. Tips: Get really low. Practice first while you're not rolling. Just jump into the right position and get that foot really low that you are practically braking on the side of your skate. After a while you can try practicing this when going really slowly. Video: (just look up Power slide on youtube, I can't post more than two links because I have no rep.) Pros: Really good way to stop really fast. Fun. Looks bad-ass. Good at high speed. Cons: Don't try this at too low speed. Hard. Wears both your skates and your wheels down.

This is a trick but also a good way to stop. It's similar to the powerslide but it has a ton of variations. (a lot of grinds in aggressive rollerblading could be, in theory, a cess slide) It's actually grinding, but on the ground or surface which is not a rail or a ledge. Example: Cess Slide Pros: Impressive. A lot of fun on slippery surfaces (or when it's wet!). High speed. Good way to stop quickly. Cons: Don't try this at too low speed. Hard. Wears both your skates and your wheels down.

Opening your legs, going really wide, and then when going back to normal position, push your force outwards but let your feet go like this /. It will make you slow down quite a bit. The wider you go, the more you'll slow down. Also when going downhill for example, holding your legs really wide will make you go slower. That' just plain aerodynamics.

Sources: I do Aggressive Rollerblading for two years now.

Obviously this isn't all that useful in a skate park or on a hockey rink, but if you are primarily street/sidewalk skating, one of the safest options is to find a surface that will

When skating fast on sidewalks, you need to account for pedestrians, pets, obstacles and the issues that your surface is quite narrow meaning you're going to have to depend much more on stopping and controlling your speed as you just don't have the space to turn and maneuver.

At slow-to-moderate speeds you can typically roll off the pavement right into the grass and glide to a fairly quick stop. When doing so, put one foot out in front of you to counter-act the quick change in surface speed (your body will be thrown a bit forward as your feet suddenly become slower).

At high speed, do the same, but be prepared to do a bit of running to slow your momentum down.

Worst case, where you're simply going way too fast, be prepared to tuck and roll. Tucking and rolling on grass always beats doing the same on concrete or running into someone or something.

Not the answer you're looking for? Browse other questions tagged technique skating or ask your own question.

19
How do you correctly learn how to hockey stop
7
How can I correct hooking my driver?
9
Tips on improving my football skills
7
How much rotation is done on the ice / in the air on single rotation jumps in figure skating?
7
How to skate backwards -- for efficiency and speed
7
How do I get over caution of going fast (with minimal access to slopes)?
1
How does the skate work in backwards, front crossovers?
4
How do you create rotation in ice skating?
2
How to build basics to compete in slalom skating?
6
High jump: Why is it not allowed to take off on both feet, do flip flops etc?