How does a double elimination bracket work?

I know that a double elimination bracket operates like two single eliminations: there is a "winners" upper bracket and a "losers" lower bracket.

Some links on brackets having byes http://www.printyourbrackets.com/pdfbrackets/9teamdoubleseeded.pdf 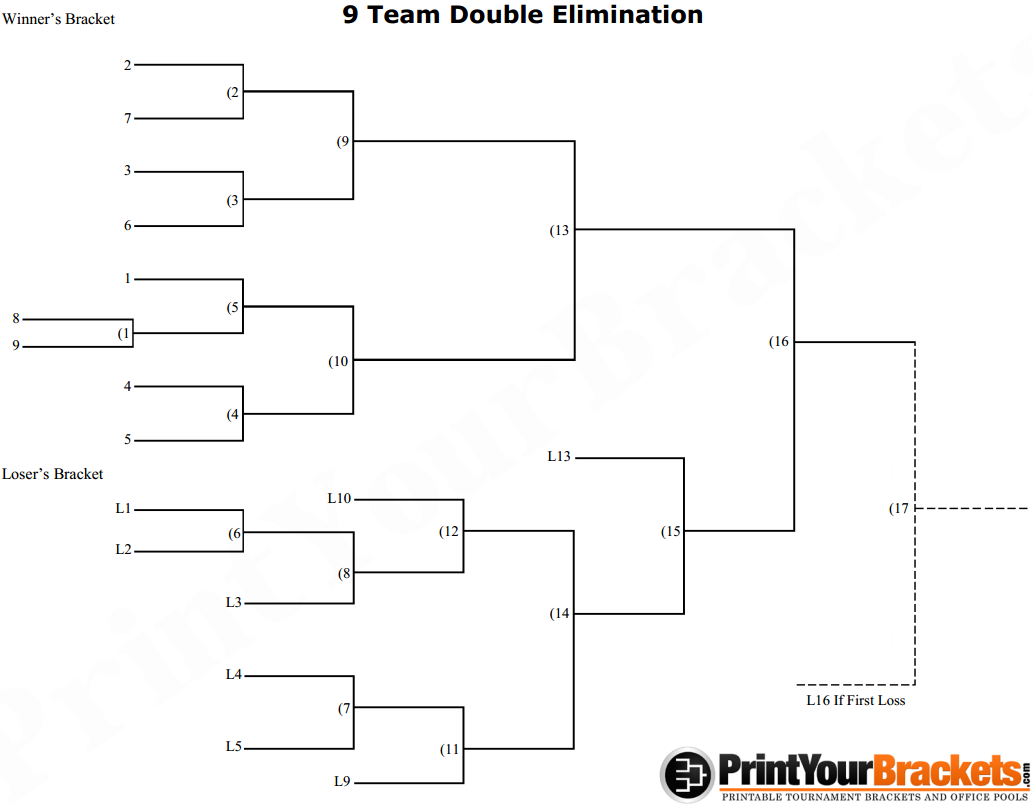 In double elimination tournaments, teams are not eliminated from the tournament until their second loss. The way this is achieved is with a losers bracket.

Let's look at the 9 team double elimination bracket that you posted. Since 9 is not a power of 2, we'll need an introductory round where only 2 teams play, and the other 7 teams get a bye. The 8 and 9 seeds play each other in game 1; the winner goes on to play the number 1 seed in game 5, and the loser becomes team "L1" and plays the loser of game 2 (either the 2 or 7 seeds).

You can see what happens for each game on the bracket; the winner of the game goes on, and the loser of the game drops down to the loser bracket in the "L" spot for whichever game number they lost on.

Compared to a tournament with 8 teams, where every team is on equal footing when the tournament starts, in a 9 team tournament, Seeds 8 and 9 are at a disadvantage, because they have to play an extra game at the beginning, where every other team gets a bye. Seeds 2 and 7 are also at a disadvantage if they lose their first game, because they will have an extra game to play in the losers bracket.

Not the answer you're looking for? Browse other questions tagged rules tournaments or ask your own question.

3
Where is the lower limit for a (baseball) strike?
2
How does the review work?
0
Drawing knockout(single elimination) fixtures
1
What's the English term for this double-elimination tournament variant?
2
Design a tournament that avoids byes
3
Double Elimination Bracket Naming Convention
2
Single Elimination Blind Draw Bracket with # of Teams != 2^n