Do team owners earn or spend money for their clubs?

Are there statistics that collect information about the cash flow of sports clubs?

What I am wondering is, in general do the team owners have to spend money to manage the club, for passion (I hope), or can they earn money from this activity as a job or an "financial investment"?

I am thinking about the most important European football/soccer clubs, or US basketball/hockey/football teams and so on

There are similar questions that has been brought up on other sites. Ultimately though, generally speaking after all annual revenue is collected and all expenses are paid, sports franchises do not make a profit. However majority increase in value annually, hence even if a owner is not making a profit through advertising and sales, their net worth still increases. This fact can be seen in the graphic below. 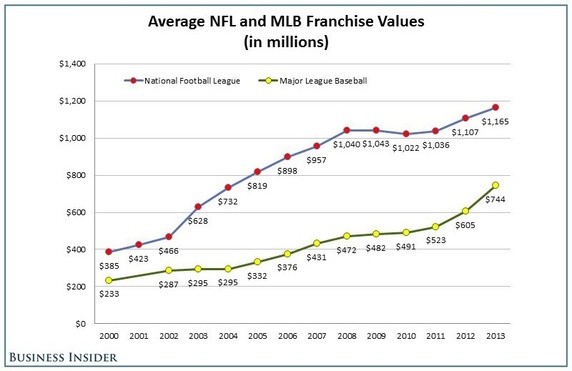 Generally, it is not the motivation of a sports team owner to make a profit, but to have their franchise increase in value. That's not to say that all teams don't make money, but many do not. It does seem that profitability of sports franchises for their owners is more dependent on the change in value of the team from its purchase to when it is sold than how much money it actually makes through ticket sales and television deals. However some teams are able to both make a profit and increase in net worth. A notable example of this can be found in the Los Angeles Angels of Anaheim, whom have produced solid profits and steadily increasing value in past years, this is explained in part through the first source, where a user points out:

The Angels were able to sign Albert Pujols to a $254million, 10-year contract due to their just-completed regional cable deal for $3billion.

Another example of both profit and increase in value can be seen in the New York Yankees whom have also been able to achieve record value and steady profits annually through massive television deals. But both profit and value are rare, as typically more valuable teams have far greater expenses.

Not the answer you're looking for? Browse other questions tagged statistics finances international-sports or ask your own question.

5
Is it common among hobby-snooker-players to play for money?
8
How do soccer broadcasts make money?
10
How much does a referee/umpire earn in a year?
6
Do NBA players earn from their jersey sales?
7
At what point does a player earn his prize money and points for getting to a certain stage in a tournament?
1
How much does a dropped NFL player earn while with a team during the pre-season
2
In the NBA, why do teams spend all their money available?