In the history of Formula 1, when has the fastest qualifier not started the race on pole?

Lewis Hamilton has a 5 place grid penalty for the Chinese Grand Prix this weekend, due to having to change his gearbox. Harsh, but that's the rule.

He's been on pole for the first two races this season so has a good chance of making it three, if it weren't for the penalty.

My question is, when was the last time that the fastest qualifier didn't start on pole, due to a penalty or some other situation? I don't think it's ever happened before due to a penalty but am not sure, hence the question.

When was the last time the pole-sitter didn't start the race on pole? This has definitely happened due to mechanical problems or spinning off the track on the formation lap in the wet, San Marino springs to mind but I can't remember the year or who it was.

There is a reason for the question - the Fantasy F1 game I run gives the pole-sitter bonus points but I am not sure what to do in this kind of situation!

I was so interested in this myself that I wasn't going to stop at anything to get a good answer. Sadly, small research didn't get me the answers I was after so eventually I spent 14 hours reviewing the reports of every Grand Prix since 1950. To the date of this answer there have been 864 of them, which is why it took so long.

Grands Prix in which the fastest qualifer didn't start from pole

Jack McGrath set the fastest qualifying speed but actually started in grid position 3, on the outside of the track. Jerry Hoyt started in pole as he was one of only two drivers to complete a qualifying event on "Pole Day" due to strong winds and the threat of heavy rain. Hoyt was actually only the eighth fastest in the field and his speed (140.045mph) is the record slowest ranked pole speed.

This was the first GP to follow the deaths of Ayrton Senna and Roland Ratzenberger at the season's previous Grand Prix at San Marino.

Whilst Michael Schumacher did start at pole position and is officially documented as such, grid places 1 and 2 were left unoccupied and painted with the flags of Senna and Ratzenberger's respective nations as a mark of respect.

Michael Schumacher qualified with the fastest lap, earning him pole position for this race. However, Schumacher's engine failed during the formation lap at Magny Cours and did not take his place on the grid.

Schumacher was involved again here, this time stalling from his hard-earned (one tenth of a second faster) pole position. As a result of this he was sent to the back of the grid. The race started successfully on this, the third, attempt after Jarno Trulli had stalled his car on the first attempt.

David Coulthard was sitting happily in pole position but his McLaren failed to pull away for the formation lap. His team managed to get him moving eventually but by this time he was resigned to starting from the back of the grid.

This is the one they called "IndyGate". Jarno Trulli was fastest qualifier and therefore in pole position. However, due to safety concerns regarding the Michelin tyres, all drivers of vehicles with these tyres retired to the pits during the formation lap. 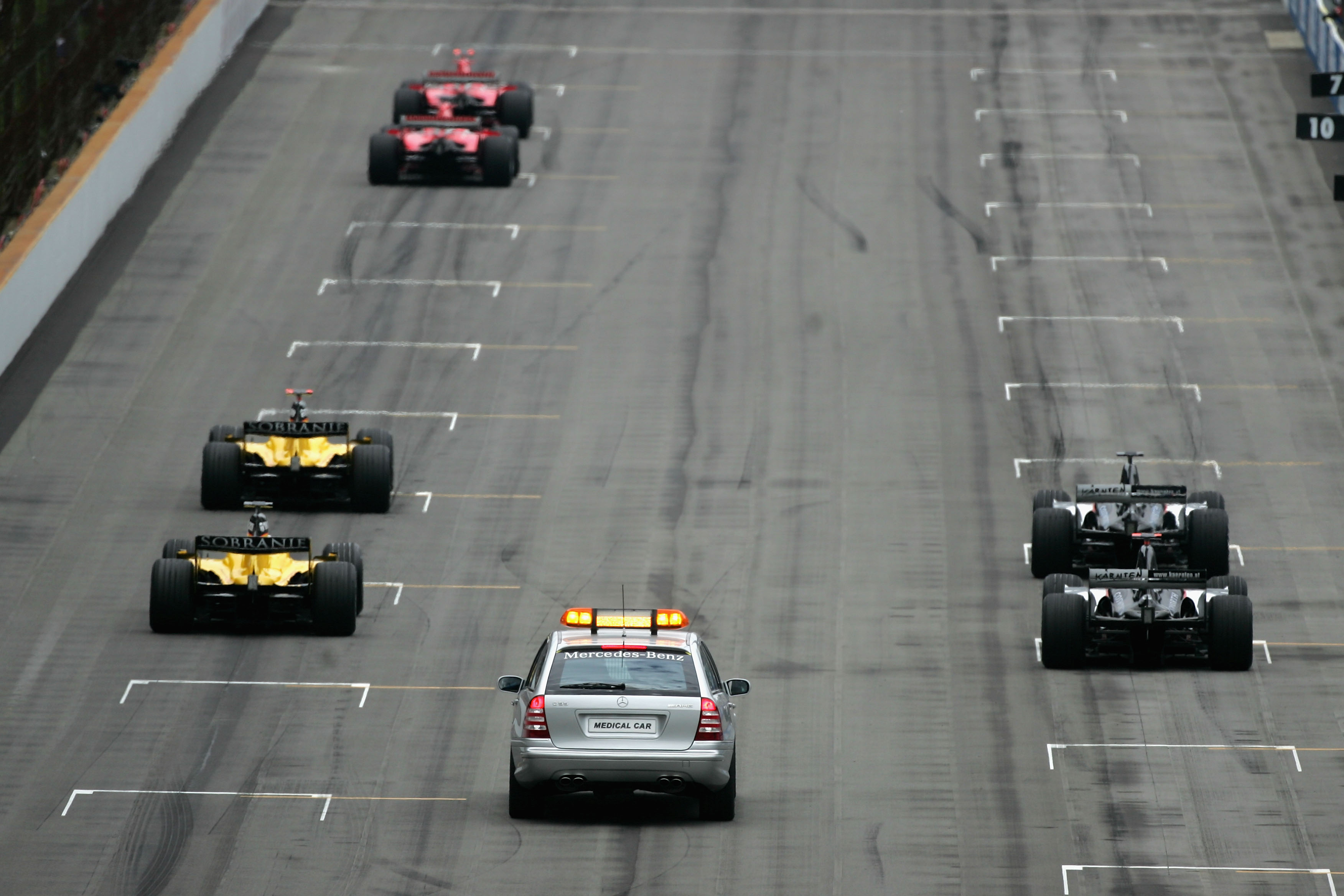 Kimi Räikkönen qualified with the fastest time but was given a 10-place grid penalty for changing his engine. Juan Pablo Montoya took up pole position as a result.

Fernando Alonso recorded the fastest time in qualifying but a stewards' inquiry before the race adjudged Alonso to have impeded Lewis Hamilton during Q3. Alonso was subsequently relegated 5 places on the starting grid, moving Hamilton up to pole.

In this event, Lewis Hamilton was excluded from the qualifying results due to having insufficient fuel to return to the pits. As a result, Hamilton had to start the race from the very back of the grid.

The fastest qualifier at Monaco was Michael Schumacher. However, Schumacher was carrying a 5-grid penalty from the previous race in Spain for causing an avoidable collision with Bruno Senna, thus moving him back in the grid.

It nearly happened in

Ayrton Senna had secured pole position but was unhappy that pole was situated on the side of the track which was not on the racing line. Senna requested that he be moved and the stewards agreed, only for the FISA president to overrule the decision, meaning Senna started in pole at the original location.

And to close, you ask:

There is a reason for the question as the Fantasy F1 game I run gives the pole-sitter bonus points but I am not sure what to do in this kind of situation!

You'll have to decide! Perhaps give the bonus for fastest qualifier instead of pole position?

You can see my spreadsheet with all the pole positions since 1950 here.

This has happened twice more since Ste's answer:

Charles Leclerc took pole position, but crashed at the end of the session. The crash caused damage to his driveshaft that wasn't discovered until he left the garage on Sunday, leaving no time for it to be fixed or replaced, and he did not take part in the race.

Valtteri Bottas was fastest in qualifying and won the sprint qualifying session, but engine penalties meant he started the actual race at the back of the grid, and Max Verstappen took pole instead.

Taking the title of the question literally, you could also count the 1997 European Grand Prix. Jacques Villeneuve took provisional pole with a time of 1:21.072, but Michael Schumacher and Heinz-Harald Frentzen both matched Villeneuve's time down to the millisecond. Villeneuve was awarded pole position by virtue of having set his time first, so Schumacher and Frentzen missed out on pole despite being (joint) fastest qualifiers.

8
When has the driver who won most races in a season not been champion?
8
When was the last 'clean' race?
8
Has anyone ever taken pole position without setting any fastest sector times?
9
Can the official fastest lap of a race be set in the first lap in F1?
8
What is the coldest Formula One race ever held?
0
In F1 why does the checkered flag appear when the driver has not finished and is further down in position?
3
Race Start Procedure when everyone pits on Formation Lap
2
What matters the most when it comes to being successful in Formula One?
1
Formula 1: How does Sprint Qualifying affect the starting grid on race day?
1
When is/was the 2021 Formula 1 champion officially decided?