When can you lift your pivot foot and go for a shot?

I was called for a travel in just a pick up game a couple months ago. I was also reading on Wikipedia information about the travel rule about the situation and it seems that there are conflicting rules.

There are 3 scenarios I need to consider.

Staggered landing, with a pivot foot, after receiving the ball for the first time.

I know that if you have gathered the ball into a staggered landing, AFTER dribbling, you can go for a shot/pass while lifting your pivot foot and your non pivot foot still on the ground. But the difference here is that you have not dribbled at all after first receiving the ball.

"True Jump Stop" where you have received the ball on 1 foot, then jumped and landed on 2 feet. In this case

"True Jump Stop" where you have already dribbled, you gather the ball on 1 foot, then jump and land on both feet simultaneously.

The confusion all arises after I read this quote on Wikipedia for FIBA traveling rules:

First, there is no paragraph 4.a of Section 72. Therefore, it is a violation if the player, after coming to a stop and establishing the pivot foot, lifts it before the other foot without a dribble.

See in particular the bit from the 2:00 mark. It includes also a discussion of exactly the contrived scenario I made up below.

There is no rule against the mere lifting of your pivot foot (or indeed any foot in any situation).

It's what you do after you've lifted your pivot foot that may constitute a traveling violation. In particular:

I've just terminated my dribble; I've also established a pivot foot. I then lift up that pivot foot and stand on the other foot (the non-pivot foot) for 10 seconds while still holding on firmly to the ball (a somewhat odd scenario). Here there is absolutely no traveling violation even though I have lifted my pivot foot.

I've established a pivot foot and I now jump. I've succeeded in mastering the art of levitation. I stay afloat in the air for 10 seconds while still holding on firmly to the ball but don't do anything with it. Here again there is absolutely no traveling violation even though I have lifted my pivot foot.

In the 2015-2016 NBA rule book, the only rules governing traveling are Rule 4 - Sections VII (Pivot) and VIII (Traveling) and Rule 10 - Section XIII (Traveling). These are fully reproduced below. 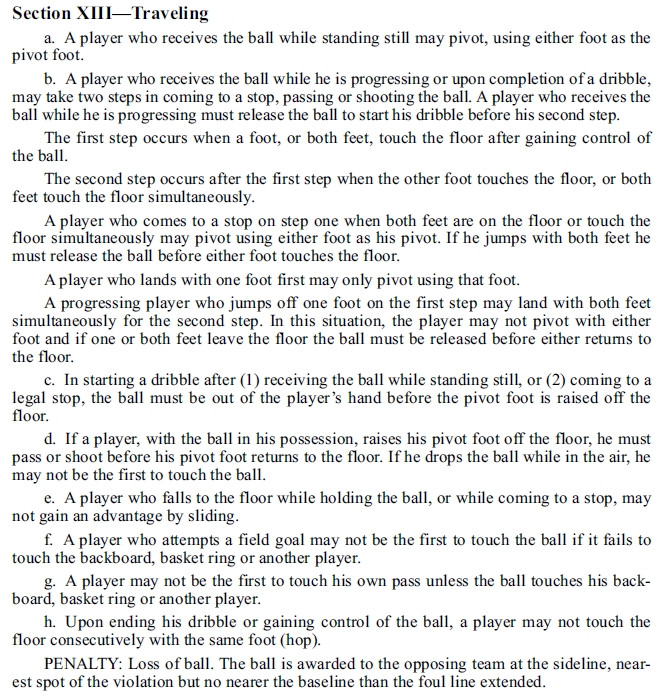 From the FIBA Official Basketball Rules 2017: 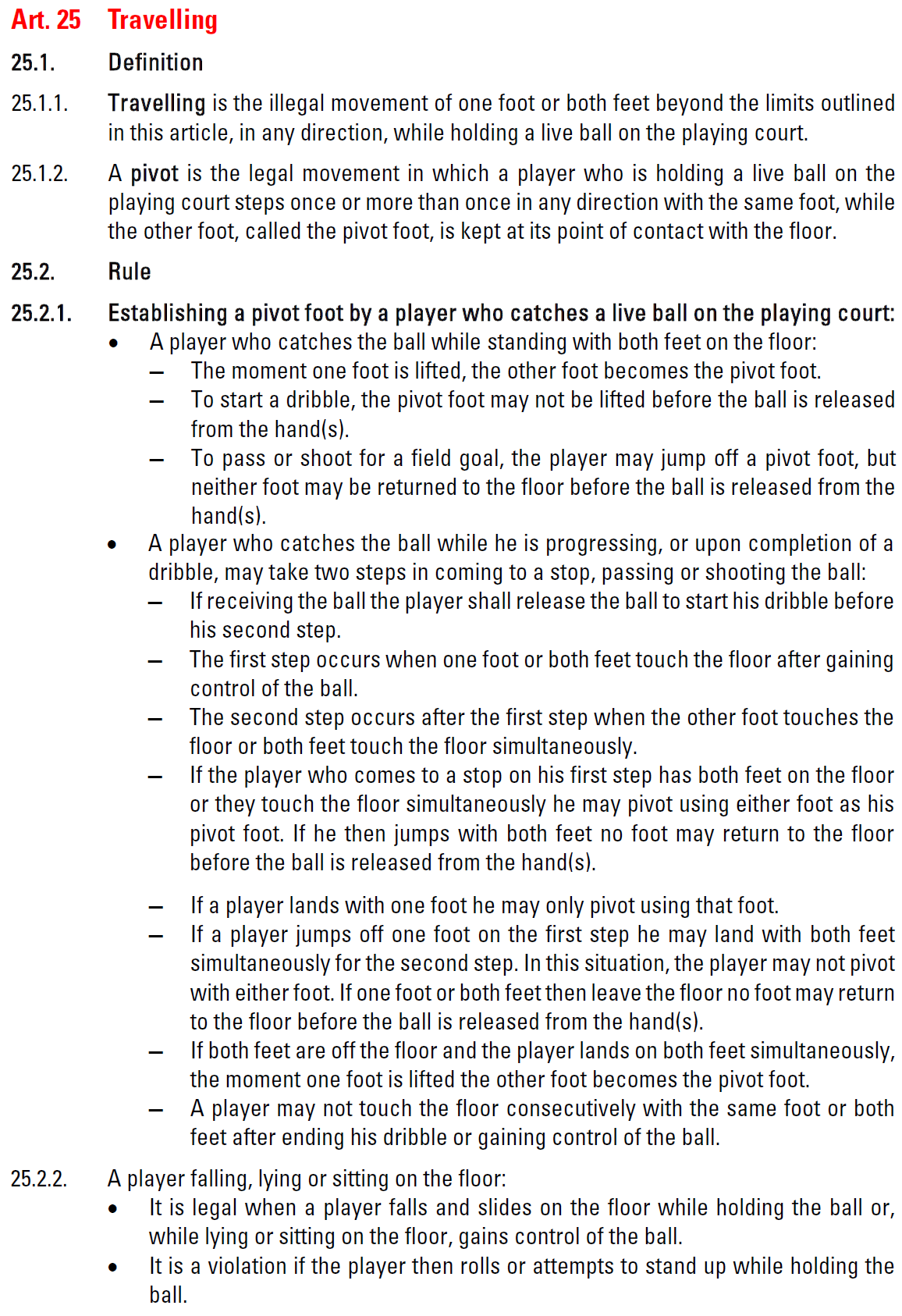 Scenario 1 - Once you have an established pivot foot you have these options:

Scenerio 2 - This is a bit sketchy. You don't get to stop after taking two steps after a pass. In a continuous motion you should have shot from this position. Let's say it isn't a travel. Then one of your feet will be established as a pivot (the one you move last) and then you are back to scenario 1.

Scenario 3 - This again sounds like a travel. You don't get a a step and a jump after dribbling unless you are shooting or passing. You can't take 2 steps and stop somewhere.

It is not a travel to lift your pivot foot To shoot and pass. The only time you can't do it off a 1 step jump stop, Which occur while you catch ball on move with 1 foot on ground and than come to jump stop. In this scenario you have jump of both feet to shoot and pass.

As the person above is correct when he said, you can basically stand on 1 foot and not get call for travel. It the act of dribbling or landing your pivot foot that is violation of traveling. Example . Caught ball establish a pivot foot, pivot around. Lift you pivot foot, as soon as you dribble it a travel , or land your pivot foot it a travel. Basically you only could pass and shoot after you lift your pivot foot. It is not a travel standing on your non pivot assuming you not skipping on it or moving it. If you are a ref and you been calling traveling because someone lift their pivot, you must have not been educated correctly.

Not the answer you're looking for? Browse other questions tagged rules basketball or ask your own question.

1
What is dribbling?
5
Traveling rules in basketball
7
Basketball shooting technique: what makes the ball go forward?
5
Can you hop on 1 leg twice when you have gathered the ball in basketball?
2
Is there such a thing as a "body fault" when serving?
3
What does the ITF rulebook consider to be "the service motion"?
0
Would you have called this a penalty?
3
NBA traveling - conflicting rules
0
Details regarding two step rule