Is it possible for three NFL teams in different divisions in the same conference to all go 16-0 during the regular season? I'm not sure if this is possible with all the scheduling rules that they have.

It is not. This is because of the regular reason scheduling:

As an add on, there could be a total of 4 undefeated regular season teams in one year. 2 in each conference.

Each division in a conference plays all of the teams in their own division twice, another division in their conference, and the other two teams that finished in the same spot as them the prior year.

This means that at maximum the highest number of teams that can go 16-0 in a conference is 2. Say you have four teams that win all of their games except games head to head against another team in the group. Each is a team from the East, West, North and South, they manage some good luck and none of them play each other as their same position game. Say for this year the East plays the West and the North plays the South. Only two of the teams in this group will be 16-0 at years end as there will be 2 head to head games among the 4 teams that only lose to teams in the group.

This is because starting with the 2020-21 season the playoffs have been exapnded by 2 teams to 14 teams, and so as a result the second seed in each conference doesn't get a bye week during the wild card weekend anymore.

The NFL schedule hasn't changed, and teams will still play 16 weeks (for now) as follows:

This allows for 2 teams per conference to go undefeated during the regular season. We'll see how next.

Without loss of generality, let's label the 4 divisions in each conference A, B, C, and D. It's possible for the 4 cases above to happen as follows:

Hence top seeds of divisions A & C in BOTH conferences now have 16-0 record. So far nothing has changed since before the 2020 season. Image below visualizes the above schedule with cases 2 and 3 marked on it. Divisions A & C are displayed in red as they have undefeated champions. 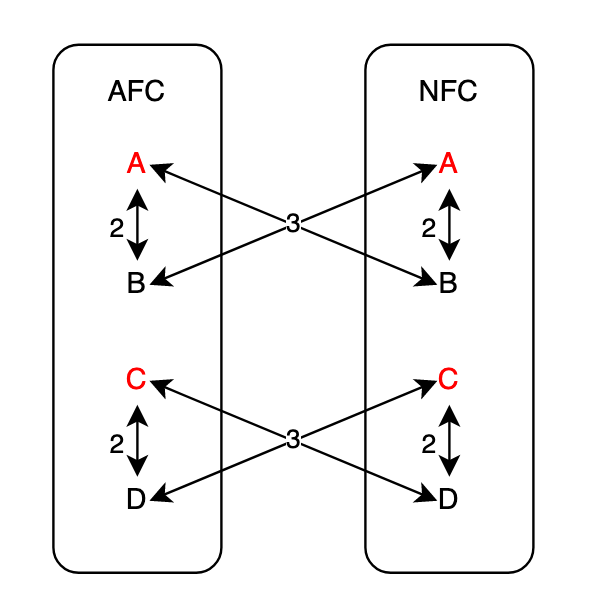 Let's denote winners of division A and C as Aw and Cw respectively, and assume Aw owns the tie break over Cw. So on the wild card weekend, Cw plays the bottom wild card while Aw has a bye. Note that Cw didn't have to play a game on wild card weekend before the 2020 season. With a win, Cw earns an extra win compared to Aw.

Both Aw and Cw win their next games, and meet in the conference finals. Aw has a record of 17-0 and Cw 18-0. Consider the case both Cw teams win their conferences. Now two 19-0 teams face off in the Super Bowl, leaving a 20-0 team as the Super Bowl champions.

It can hypothetically but its extremely unlikely that they wont play each other.

First its extremly hard to go 16-0 anyway.(also ussually if ur 14-2 u will not play your starters)

And also winning all the games in the playoffs BUT Thanks to 2020 playoffs its possible now: https://www.nbcsports.com/philadelphia/eagles/nfl-playoff-format-changed-2020-season

EDIT:here is the way 2 teams get 16-0(because 3 teams is impossible): Lets say from the nfc west a team defeats every team in their own division and a team in the nfc east. Now the same thing happens with a team in the NFC North. Those teams have 2 more games to play so they have to hope they dont face each other.Then if all goes well The number 1 and 2 seed will both be 16-0 and 1st seed will have a bye and 2nd seed will play in wildcard. Then the wildcard 16-0 team wins every playoff game. 20-0 ()

Not the answer you're looking for? Browse other questions tagged american-football nfl ranking schedule or ask your own question.

16
NFL standings: 8-6-2 team vs 9-7-0 team?
6
How are tiebreakers determined among teams within an NFL conference?
8
Can a team in the NFL make the playoffs with only three wins?
7
How many of the NFL tiebreakers have actually been used?
3
Division Tie Breaker - Common Games
5
Number 5 seeds hosting NFL conference championship game
7
NFL division with 3 teams in the playoffs
4
What would prevent the NFL from expanding to a 19 game season?
1
NFL: going for it on fourth and 1
3
What is the earliest a team can clinch a division?