Does the tackle box in gridiron football extend through all the offensive linemen even if they're a long way apart?

On 10 January 2015 in the NFL playoffs, the Patriots lined up in a weird formation in which Shane Vereen, a running back, reported ineligible. Vereen was "covered" by a receiver on his team, meaning there was someone else on the line of scrimmage closer to the sideline than Vereen--see image below; Vereen is circled in yellow. So Vereen was effectively one of the five offensive linemen, although he was lined up a good ways from the other four. My question is, for the purposes of intentional grounding, etc., is the tackle box considered to extend all the way to Vereen? Does it matter that Gronk, not lined up on the line of scrimmage is between Vereen and the other linemen? 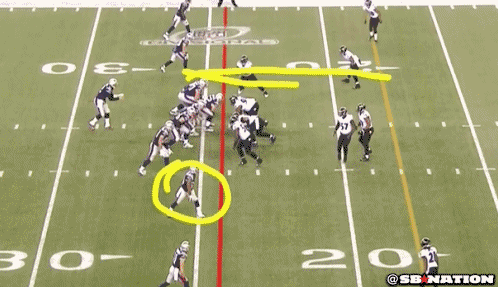 The rules make reference to the tackle box when talking about unsportsmanlike conduct penalties (horse collar tackle, illegal chop blocks, illegal hits on defenseless players) but not in the rules on intentional grounding. The pocket area is referred to in the intentional grounding rule, even if not specifically in the section that concerns your situation. So I would say that we use the definition of the pocket, and not that of the tackle box, to determine whether or not intentional grounding has been committed; this takes us back to the "normal tackle position." (For what it's worth, the tackle box extends from "tackle to tackle" and I think you'd be hard pressed to define Vereen as the right tackle here, considering there is a traditional right guard and tackle on the line as well.)

To further my case, it seems most of the talk about this play has referred to the Pats having 4 offensive lineman, and not counting Vereen as one of them. (A couple different tweets and people refer to that in this SB Nation article on it.)

Ultimately, there definitely is some ambiguity here, and I think there's some leeway for the referee to decide for himself, but looking at what I see here, I'd say that if Brady makes it outside of the traditional tackle box but is still inside of Vereen's position, he wouldn't get called for grounding.

All the rules I referenced in here come from this edition of the rules on the NFL website. (Warning: that is a rather large PDF).

This is more of a comment but a long one so it won't fit.**

@tarchibald has a good answer. I will offer a few other points with my coaching and refereeing background.

I've always thought it was a highly subjective rule also. Seems like there should be a hitch (dash line) in between the hash marks and the numbers (and on that line) to show where they'd have to be considered outside the pocket regardless of where your linemen are. To me, that would just make better sense – it's like a ref always deciding where the invisible 3-point line is in basketball. Create a physical line and take a huge portion of the guessing out. However, the NFL rules are constantly changing and have been since its conception. Since the above play was used, they've changed several rules; such as, there has to be one eligible receiver in the backfield in the pocket.

Not the answer you're looking for? Browse other questions tagged rules american-football formations or ask your own question.

5
In American Football, why are fullbacks called such if they aren't all the way back from the OLine?
8
In North American football, why are 2 of the 5 offensive linemen called "tackles"?
2
What happens if a team returns a blocked extra point a long way, but not all the way to the end zone?
1
Intentional grounding when receiver has stepped out of bounds