I remember playing NBA Live 97. This was back when the Bulls were the team to beat. And every time I would go to the Bulls roster, every player was there except Michael Jordan. 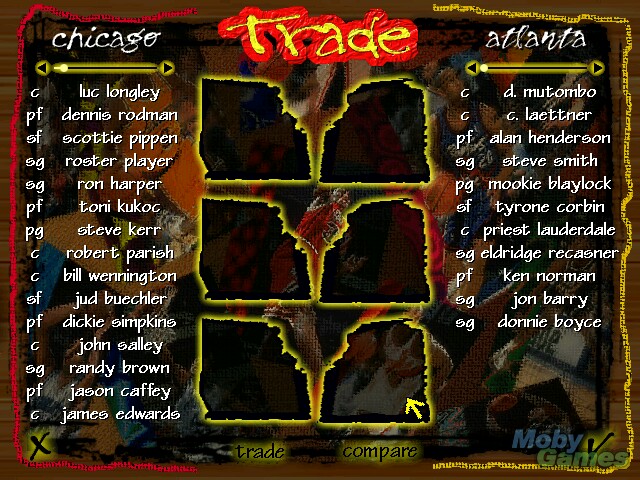 At the time, I was 7 and didn't know any better. But I now realize there must have been some financial or personal reason why Jordan didn't appear. They didn't even use his number. They used number 24 and called him Roster Player.

NBA2K11 was an example of what Jordan did when actually let people put him in the game. That edition had so much MJ in it it got old and obnoxious. It was like every part of the game had to have Jordan on it.

Does anyone know the history of Michael Jordan's licensing of his name and brand to video game companies? If so, can you explain why he wasn't in NBA Live 97 (when he was playing like a stud) but then suddenly had a Jordan explosion in NBA2K11 (long after he was relevant)?

Does anyone know the history of Michael Jordan's licensing of his name and brand to video game companies?

Jordan appeared in Tecmo NBA Basketball, released in November 1992, which included rosters for the 1991-1992 NBA Season.

Jordan dropped out of the virtual scene when he opted out of the National Basketball Players Association's shared licensing agreement after ushering in sports gaming on the Sega Genesis and Super Nintendo in the early '90s.

If so, can you explain why he wasn't in NBA Live 97 (when he was playing like a stud) but then suddenly had a Jordan explosion in NBA2K11 (long after he was relevant)?

The above explains why Jordan wasn't in NBA Live 97.

However, he did appear in several video games, such as the Space Jam video game (after a movie Jordan starred in and not NBA licensed) as well as NBA Live 2000 and 2003, his only two official appearances in the NBA Live video game franchise(2)(3).

2K Sports, the publishers of the NBA 2K series, signed Jordan to an exclusive licensing deal in 2010(4), before the release of NBA 2K11 to include him in the game(2).

Jordan actually appeared in EA sports game "nba showdown" in '93 n as a secret player in nba live '96 as well as Charles Barkley, b didn't reappear again until live 2000

Not the answer you're looking for? Browse other questions tagged nba or ask your own question.

4
Why do NBA teams wear spanish jerseys?
12
Why don't more NBA teams use the triangle offense?
7
NBA draft picks as a team rebuilding strategy
7
What is the maximum number of 3 pointers made by Michael Jordan in a single game?
6
Why is music played during NBA games?
0
Most number of game 7s played in a single playoffs
5
Non-USA superstars in the NBA seem to be much taller on average than superstars from the USA: What exactly is the reason?
1
When did basketball change the rule so that games end when the clock hits 0.0 instead of when the buzzer sounds?
0
Why is the hook shot used so little in the NBA?