Ranking points for a player who received bye

The 2015 ATP rulebook says in section 7.18 Byes - Assignment and Placement that:

For example, Tsonga received bye in Barcelona this year. He lost in the second round to Granollers. As we can see in his ranking breakdown (Internet Archive), he has 0 points for this tournament. (Players, who advanced to the second round without a bye, got 20 points.) 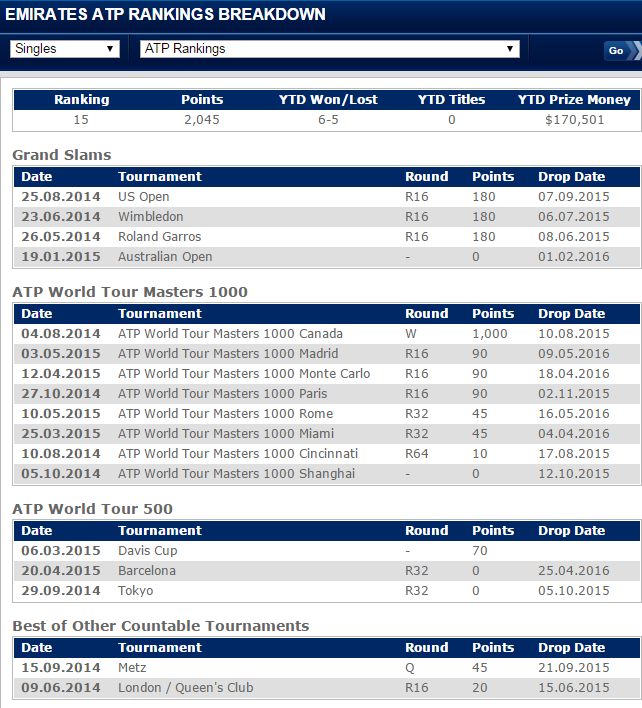 Ranking points are based on where you get to in each tournament rather than for actually winning games, or even the standard of opponent you play. As a result the player receiving the bye will get the points for reaching the second round, even if they lose. While, on the face of it, this may seem unfair, it is one of the benefits they receive by being successful enough to be seeded in the first place.

Not the answer you're looking for? Browse other questions tagged tennis ranking atp wta or ask your own question.

10
When a tennis player comes out of retirement, what happens to their points & ranking
11
How can a player have more points in race rankings than in the ATP world rankings?
6
Do players get points for matches in Davis Cup and Fed Cup in ATP/WTA rankings
5
Do players get points into ATP ranking even for matches in qualifying rounds
2
ATP/WTA ranking during Grand Slam tournaments
4
What was format of tennis year-end championships in the past?
5
How are points in the ATP/WTA ranking computed in case tournament final is delayed (and finished during the following week)?
6
How are doubles seeds calculated?
5
Ranking from which week are used to decide who qualifies for ATP/WTA finals?
7
At what point does a player earn his prize money and points for getting to a certain stage in a tournament?