Football - Who gets the match ball, if 2 or more players score hat-tricks in a game?

In football, if a player scores a hat-trick, he usually takes the match ball with him as a souvenir.

But if 2 or more players score a hat-trick in a single game, then who gets to take the match ball with him?

As usual, the very excellent The Knowledge series of The Guardian has an answer. The January 28, 2004 entry goes like this:

"On Sunday, Empoli drew 3-3 with Juventus, Tommaso Rocchi bagging a hat-trick for the home side, and David Trezeguet claiming all three goals for Juve," says Stuart Bruce. "With the scorers of hat-tricks traditionally claiming the match ball, who gets to take it home in a situation like this? Has there ever been a situation of three or more players all with a valid claim to the match ball in any one match?"

But, we have consulted with the FA stattos on this one and are told that though there are no rules, the convention would in all likelihood be that the first player to score a hat-trick would receive the match ball. Thus, as Rocchi completed his hat-trick in the 62nd minute, 14 minutes before Trezeguet made it 3-3, the Empoli striker should have be the one making space on his mantelpiece, which we hope is level or else the ball will keep rolling off it.

As far as your second question goes Stuart, there are in fact several examples of three players scoring a hat-trick in one game. The last instance - which, incidentally, is also the last instance of a team scoring 10 goals in an English league game - comes from November 7 1987, when Manchester City beat Huddersfield Town 10-1 in the old Second Division.

On Wednesday February 3rd, 2016, FC Barcelona vs Valencia, in the Copa Del Rey, Luis Suarez and Messi both scored a hat-trick. Suarez scored 4 goals, Messi scored 3 goals. At the end of the match, they both left with a football. 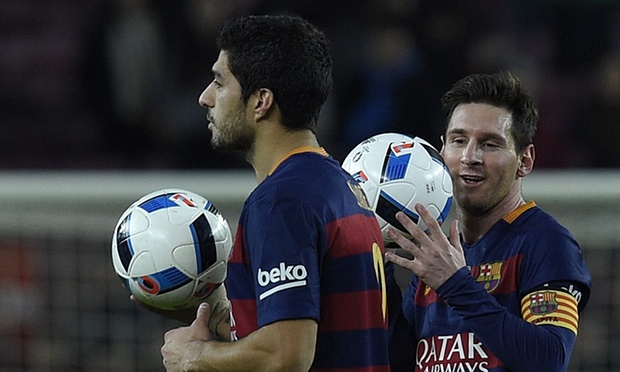 15
How are the kids who walk with players into a football match selected?
5
Hat-trick rules for different match/innings
2
Player with debut match perfect Hat-trick?
3
How many football players enter at the start of the match?
2
Who is the "winner" of each leg of a two-legged football match, or a match that goes to penalties?
3
What happens if a player who has been cautioned during the match gets a second yellow card while kicks from the penalty mark are being taken?
0
In football, are there any post-match repercussions for not upholding the spirit of the game?