The scores at the 2012 US Open seem pretty bad, after the first round only five players were under par.

Looking at the previous major tournament, The Masters in April, there were 28 players under par after the first round.

What is so different about the US Open (or the Olympic Club where it is being played) that makes it so difficult for golfers to score well?

What is the US Open?

The US Open is a major golf championship, the second during a given calendar year, that commences in mid-June. It is dubbed "Golf's Toughest Test," and for great reason. The USGA, the organization that stages the US Open, sets up its golf courses as a rigorous test to challenge a golfer's shot-making ability, course management, and composure under pressure.

The USGA considers the following factors in setting up US Open golf courses:

An example in relation to the Olympic Club, the USGA added a bunker on the 17th hole to "complicate the 'lay-up' shot and encourage players to go for the green in two."(1)

Wikipedia's description of the US Open:

The U.S. Open is staged at a variety of courses, set up in such a way that scoring is very difficult with a premium placed on accurate driving. U.S. Open play is characterized by tight scoring at or around par by the leaders, with the winner usually emerging at around even par. A U.S. Open course is seldom beaten severely, and there have been many over-par wins (in part because par is usually set at 70 except for the very longest courses). Normally, an Open course is quite long and will have a high cut of primary rough (termed "Open rough" by the American press and fans), undulating greens (such as at Pinehurst No. 2 in 2005, which was described by Johnny Miller of NBC as "like trying to hit a ball on top of a VW Beetle"), and pinched fairways (especially on what are expected to be less difficult holes).

In 2000, Tiger Woods won at -12, 272. Ernie Els and Miguel Angel-Jimenez finished tied for second place....at +3, 287....15 shots behind Woods. This has been portrayed as the most dominating major victory in history(1). Take away Woods's performance, and you will see that the 2000 US Open played difficult among the golfers.

In 2011, Rory McIlroy broke Woods's record score in relation to par and aggregate by winning at -16, 268. Jason Day finished second at -8, 8 shots behind McIlroy. However, 20 golfers finished under par that week, and 38 golfers finished at +3 or better. Take away McIlroy's performance, and you will see that the 2011 US Open still played favorable among the golfers. Reason for the relatively favorable play that week? Rain, and lots of it. It softented up the course and slowed down fairways and greens. US Open fairways and greens are historically very fast.

A brief comparison to the Masters: The Masters historically scores under par. A Masters winner has finished over par only a few times (like Zach Johnson in 2007. Reason? Mid-50s°F weather the whole week. The Masters usually plays in the 80s°F).

The point of the US Open is to see which golfer survives after four (or more) rounds of golf. The Olympic Club is "so difficult" because of the standards in which the USGA sets up US Open golf courses.

Specifically to the Olympic Club, the first 6 holes of that course are a bear.

Hole 1 is a long par-4 (520 yards; that would normally be par-5 territory except this one's downhill). The fairway moves slightly right, so tour players either have to skim the trees on the right side or hit a slight fade to avoid ending up in the rough on the left side for a long second shot from tall grass (which MANY players ended up doing, and remember that tour players were required to use "conforming" clubs with shallower V-shaped clubface grooves, which makes hitting from the rough harder). The second shot is slightly uphill, which would normally require a long iron to run up onto the green, but the green is protected by bunkers in front so you can't roll up to it; you have to hit a shot that will carry in the air and then stick just before the pin. Many of the tour players rolled off the back of this hole using a fairway wood or hybrid.

Hole 2 is straight and shorter, but the approach is uphill, the green is small and depending on where the hole was cut you can't see the pin from the best approach to it (for the final round, it was cut in just such a location, on the other side of a steep bunker from the best approach). There's a roll-up approach for those inclined (again depending on hole placement) but if you overshoot there are two backside bunkers waiting to catch the ball (which, again, happened to many of the tour players). If you undershoot, a steeply-sloped frontside bunker will make the up-and-down a real challenge.

Hole 3 is a long par-3 but downhill; you or I would probably use a 3-wood, the tour pros generally hit a hybrid or mid-iron off the tee. The trick is a dead-straight shot and good club selection; otherwise you'll catch one of the 5 (!!!) bunkers surrounding the approach and green.

Hole 4 is designed to take your tee shot out of play. It doglegs around a hill to the hole's left, meaning the fairway slopes right. Hit your tee shot low and you'll either catch the trees right in front of you, or it'll roll out into the right-side rough. A slight draw is the best play; it'll curve just a bit left and roll more left (countering the fairway's tendency to roll the ball right). Then, the fairway narrows on the uphill approach shot, with two approach bunkers left and right; this is another one where you may not see the pin on your approach depending on hole placement and your lie. The green slopes severely back to front, so it'll catch a nice straight or slightly-drawn approach shot, but it'll be very easy to overputt or underputt.

Hole 5 is almost the mirror image of #4; dolgeg right with fairway sloped to the left. This one plays downhill and so is longer, and the fairway is even narrower. Hit the tee shot long and this hole will punish you by forcing you to hit a 200-yard long iron or lofted wood shot over trees close in to the fairway.

Hole 6 is more of the same; long (50 yards longer than the last time it hosted the Open), straighter but still heading left. There's a nice fairway bunker on the left to catch an overdrawn drive, and you need a 300-yard carry distance on your driver to clear it. The green is tiny, is again tightly protected by bunkers, and the longer total yardage will mean players have to hit a longer iron for more rollout. This is an extremely difficult GIR to make. 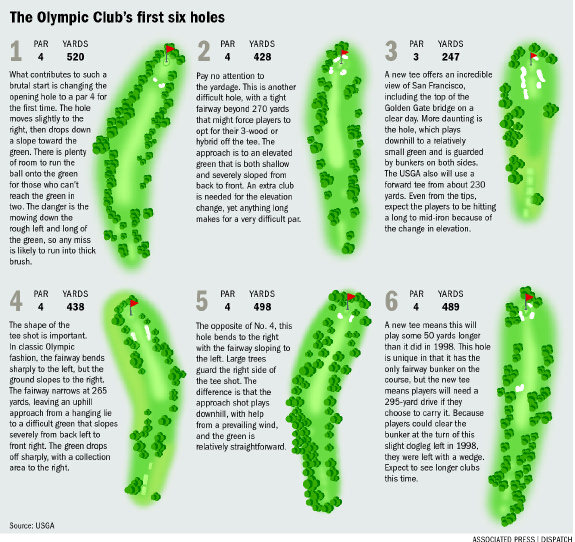 As far as comparing the Masters to the Open, there really is none:

To answer specific to your question, the Olympic Club is as difficult as it is because the USGA made it that way for the US Open. Prior to the tournament they allowed the rough to grow longer and closer in (making the fairway more narrow), they sped up the fairways and greens, They chose pin placements that were more difficult, and they moved some of the teeboxes back to make holes longer. All to make sure that the course lived up to the US Open standards.

Not the answer you're looking for? Browse other questions tagged golf venues or ask your own question.

5
Does course length correlate to the difficulty of golf courses?
0
What makes US Open golf courses easy?

7
How can I correct hooking my driver?
8
Managing split tees in golf
8
How is The location of the US Open determined?
7
Relief from cart path on a hill
5
Does course length correlate to the difficulty of golf courses?
3
Championship golf courses with a par-3 18th hole
4
What are golf cups made of?
5
What is the name and origin of this golf format?
5
Wind delay at the British Open
8
In golf, what is the relationship of shaft flex with accuracy?