What percent of corner kicks turn into goals?

I have looked around for this statistic without luck. I just wondered what percentage of corner kicks actually result in a goal? Not necessarily straight in, but from the same passage of play. I have seen answers (without any references) varying from 2.5% (feels too low) to 32% (surely way too high). Anyone know?

The percent of goals from corners is changing from league to league, for one competition to another and for one year to another. For example on 2010 World Cup 1 goal scored for every 70 corners taken,

but generally the ratio of corners to goals is almost zero. 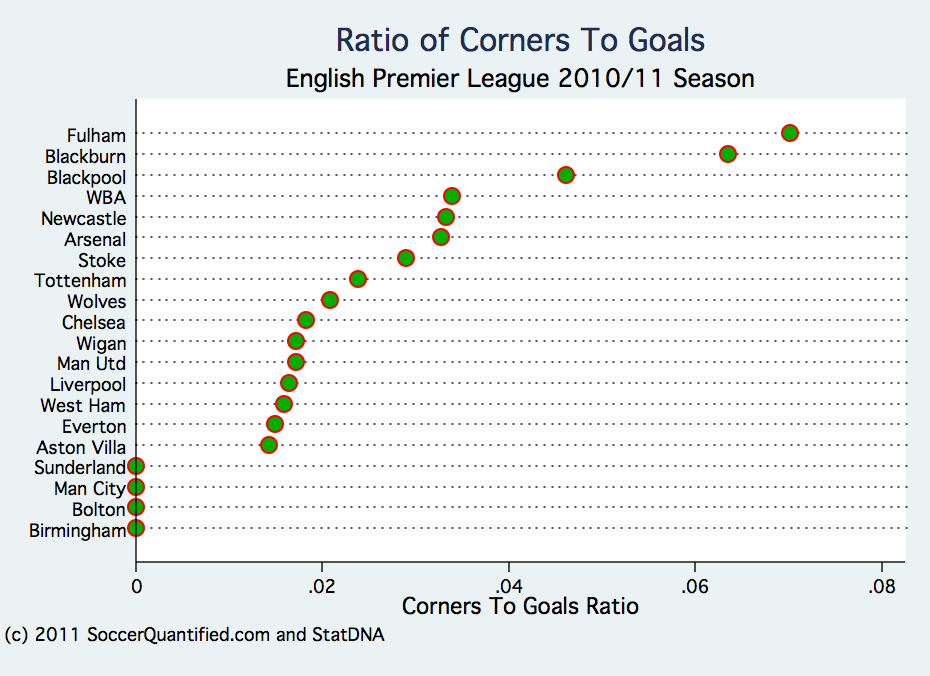 You can see that Fulham who has the best ratio has 0.07 goals for corner.

The most extensive articles I came across it was: soccerbythenumbers and scienceofsocceronline

You might be surprised to hear that the ratio of corners to goals is almost nil.

On average, the data show that a corner is good for (drumroll ....) 0.022 goals. This means that the average EPL team scores 1 goal from a corner about every 10 games. And this helps to explain the lack of a correlation between the number of corners and goal scoring. The infrequency of the goals from corners combined with a lack of dispersion between teams in corners per game lead conspire to make corners mostly, well, useless when it comes to scoring goals.

In this sample of matches, Fulham and Arsenal led the league in converting corner-created shots into goals at a rate of over .25, while at the low end, none of the shots created by Sunderland, Man City, Bolton, or Birmingham found the net.

Copyright notice: The images and quotes posted above remain the sole property of the original owners and are posted here for educational purposes only.

The chance that a goal will be scored off a corner kick appears to be roughly 3%.

Michael Caley at the Washington Post recently analyzed a set of nearly 13,000 corners taken in the English Premier League between 2011-2013, finding:

Caley links to a study by Chris Anderson and David Sally at Soccer by the Numbers, which showed that EPL teams converted corners between 0-7% during the 2010/11 season, with the average team converting corners into goals at 2.2%. At that rate, the average team would score by corner kick about every 10 games.

Your are not looking at the situation properly. Obviously the rules state corner kicks must be taken, there is no other option. So, the only use for this data is for wagering purposes. Odds a corner kick will be a goal...easy. Will getting a lot of corner kicks win you games.....a lot more complicated.

The data and parameters you need for the calculation to make sense are as follows.

The total number of goals scored by a league or team. For example if you want the stat on how many goals a particular team will score, you need "team" data. Your sample size needs to be at least 100, but for near 100 percent accuracy, a thousand would be better. For example, a thousand games, or a thousand goals.

The total amount of time played in all the games in the sample.

The amount of time a corner kick takes. This is subjective, obviously, but could be limited by an arbitrary amount, say 20 seconds, or first control by the defending team, or a combination....20 seconds, or control, whichever comes first.

The number of corner kicks taken.

The number of corner kicks that are successful.

With this data you can determine the following probabilities:

The odds a corner kick will be successful. How lethal a corner kick is for scoring a goal. This would be determined by figuring how many goals are scored per 20 seconds of time, compared to the percent of goals scored by corner kick.

For example, what odds would you give for a team to score a goal in 1 minute of time, compared to the odds of scoring on 3 corner kicks.

My guess here is that corner kicks are much more likely to score a goal than ordinary play, and a lot more lethal than people would think. A defending player would be crazy not to kick the ball to the side rather than to his own end, resulting in a corner. A further complicating factor would be, how many corner kicks draw penalty kicks etc, which are highly lethal. In games which are often won by a single point, a few extra percentage points of advantage is huge.

Saying corner kicks are not material to winning games is probably a gross overstatement.

share|improve this answer
answered Jan 27 at 16:26

5
What percentage of football goals originate from corner kicks?

20
Most number of extra-time Goals
5
What percentage of football goals originate from corner kicks?
10
What is the percentage of goals scored during added time?
4
Why do players tend to pass the ball when taking corner kicks in soccer (football)
1
Hand ball and free-kicks
4
What percentage of onside kicks have been successful in the 2015 NFL regular season?
8
What happens after eleven kicks from the penalty mark?
6
Are own goals considered when calculating goal conversion rate?
4
How are stoppage time goals deduplicated from regulation time goals?