Why doesn't the MLB implement a salary cap?

I was reading an article in FiveThirtyEight a few months back which described the NBA as one of the most lopsided leagues in North America. By that it meant that the same teams tended to be successful, and you could come close to predicting which teams were likely to win a championship before the season even started.

Second on that list was the MLB. When you look across the MLB it's very easy to identify a handful of power-houses who usually do well, and then half the league who is written off from the very start.

Logically speaking, this seems to be a major problem because the entire league becomes more about which owner has the most money, and less about which team is actually managed and performs the best.

So why is it exactly that the MLB hasn't implemented a salary cap yet?

The owners would implement a salary cap in a New York Minute if they had the opportunity. The players, however, would not agree, and because MLB is so successful monetarily even without one, and also has one of the most powerful players unions, the owners don't have the power to force it on them. It's not hard to find articles about how the MLB owners would like a salary cap and the MLBPA refuses; see this one, this one,

Why is that? Because a salary cap is not intended to create parity. The primary function of a salary cap is to reduce player salaries, or at least keep them from escalating too quickly. Salary caps reduce the maximum a player can earn - either directly (NBA-style) or indirectly (NFL style) by simply reducing the total amount a team may spend on salaries.

The problem with MLB being uncapped (particularly pre-recent luxury tax rules) was that player contracts simply escalated as new owners came in and decided to spend a lot. That escalation was not necessarily related to total income of the league. NFL and NHL, and to a lesser extent NBA (which is a softer cap closer to MLB's current system) have direct ties between revenue and player salaries - which mean you can't have player salaries escalate dramatically, unless the total revenue for the league is very high.

Look at the following chart of post-1994 strike revenue vs. player salaries: 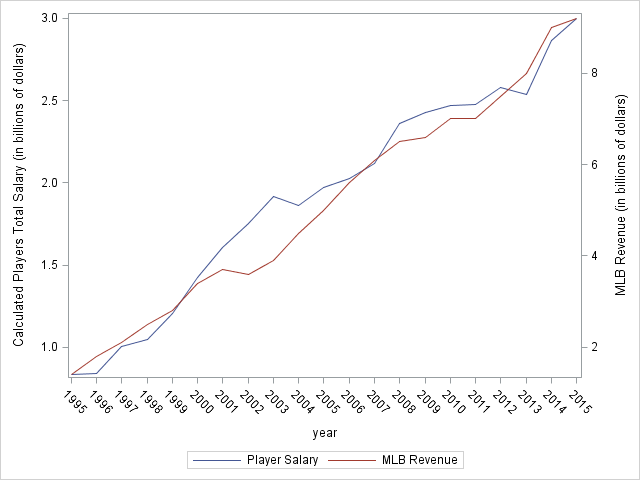 While the two lines trend together over the long term, there are some regions that are very different - particularly in 2001-2004 and 2008-2012 where player salaries were well above the trend line compared to the MLB revenue. Some of the major CBA changes were in direct result of these differences. Note that the latest CBA seems to have finally had enough impact that the players' line is below the MLB line for the first time since 1998.

A full salary cap would guarantee it stayed below or on the trend line. Hence why the owners - who are almost all businessmen who want to run a successful business, Jerry Reinsdorf aside - want a full salary cap. And conversely, the MLBPA would prefer not to have one, so salaries can be higher thanks to free market bidding.

One note about the NBA: Because of the NBA's very ... odd ... salary cap, it actually has less fairness. That's because Lebron-type players are badly underpaid due to the player-salary limit. NFL and NHL style salary caps are much more fair in terms of evening out competition. They also reward good front offices though - which is probably why they have fewer 'new winners' compared to the MLB. They also have less trading than the MLB of future talent for now talent, meaning that teams like the Rays, the Royals, the A's, etc. can grow on relatively small salaries by trading their good players away for future prospects who will be much cheaper. MLB also has a far more limited salary structure for newer players - most players play three full seasons for almost nothing and three more at very low rates before becoming free agents, as opposed to the NFL (rookie salaries are limited, but far less so than MLB) or NBA.

In the past 30 years, 19 different teams have won the World Series. In comparison, only 14 different teams won the NFL Super Bowl, 13 won the NHL Stanley Cup and 8 won the NBA championship in that same time frame.

The only sport in that group to not have a salary cap is MLB. So it shows, at least in terms of championships, that while the big money teams do have a better chance, it doesn't always matter, and there is certainly more parity in terms of who can win it all in MLB.

Instead of a salary cap, Major League Baseball implements a luxury tax (also called a competitive balance tax), an arrangement in which teams whose total payroll exceeds a certain figure (determined annually) are taxed on the excess amount in order to discourage large market teams from having a substantially higher payroll than the rest of the league. The tax is paid to the league, which then puts the money into its industry-growth fund.[20][21]

A team that goes over the luxury tax cap for the first time in a five-year period pays a penalty of 22.5% of the amount they were over the cap, second-time violators pay a 30% penalty, and teams that exceed the limit three or more times pay a 50% penalty from 2013 onwards. There is also an incentive to lower payroll; if in any year a team goes under the threshold, the penalty rate decreases to 17.5%, 25% or 40% (depending on prior record over the previous five years) for the next time the tax is paid, which will apply from 2013.

According to this paper:

We find no evidence in our data to suggest that salary caps have helped competitive balance, measured as the variation in wins between the best and worst teams in a league in a given year, in professional sports. Further, there is some indication that the introduction of the salary cap in the NBA is associated with a significant decrease in competitive balance.

A cap obviously makes it more competitive. The NBA without a cap would be far more easy to predict a winner. That's why the NBA must have a cap -- it's a very predictable sport.

The players standing in the way of there being a salary cap is probably true. The owners of New York and LA teams would vote against a cap and everyone else would probably vote for a cap.

Due to a cap reducing what a player can earn, it is voted against. It ruins the sport and is very self-centered of the players. But a player isn't generally very bright, so it's no real surprise!

I would also disagree with the smarter post where it says the NBA has a bad salary cap and people like Lebron are underpaid. That's purely opinion and not factual. Salaries like Lebons stop teams like the Cavs from being able to bring in enough other talent to win a championship -- we see this all the time. Lebron takes 30 mil a year and then scratches his head why his team can't win. I would say Lebron takes too much of the allocated percentage and that we see this with just about all superstars in the salary cap era, apart from the Spurs and Warriors who were smart enough to avoid this (they avoided it by accepting less money.)

The reason the NBA still seems unbalanced is because you only have 5 players on the court and when 3 superstars decide to join forces, it makes them very hard to beat. That has happened lately. You can be rest assured it would be far worse without a cap. You would probably have all stars on two teams.

8
Why are large MLB contracts backloaded?
6
Salary Cap and Bird's Rights
3
Bypassing the salary cap through hidden accounts
2
How does the NBA salary cap work?
3
How does NBA players' salary increase during the playoffs?
3
What does an NFL salary cap department do?
2
When did incentives and salary escalators start in the NFL?
2
Do MLB starting pitchers get paid per start or per game they are on the roster?
2
How were the Tampa Bay Lightning 18 million over the cap?