In the NBA, the West has been the stronger conference over the past decade or two as the graph below shows. The difference between the conferences is usually evident in the playoffs and in the All-Star games. Why is this so? Is it because the teams in the West can afford to pay more or are there other reasons? 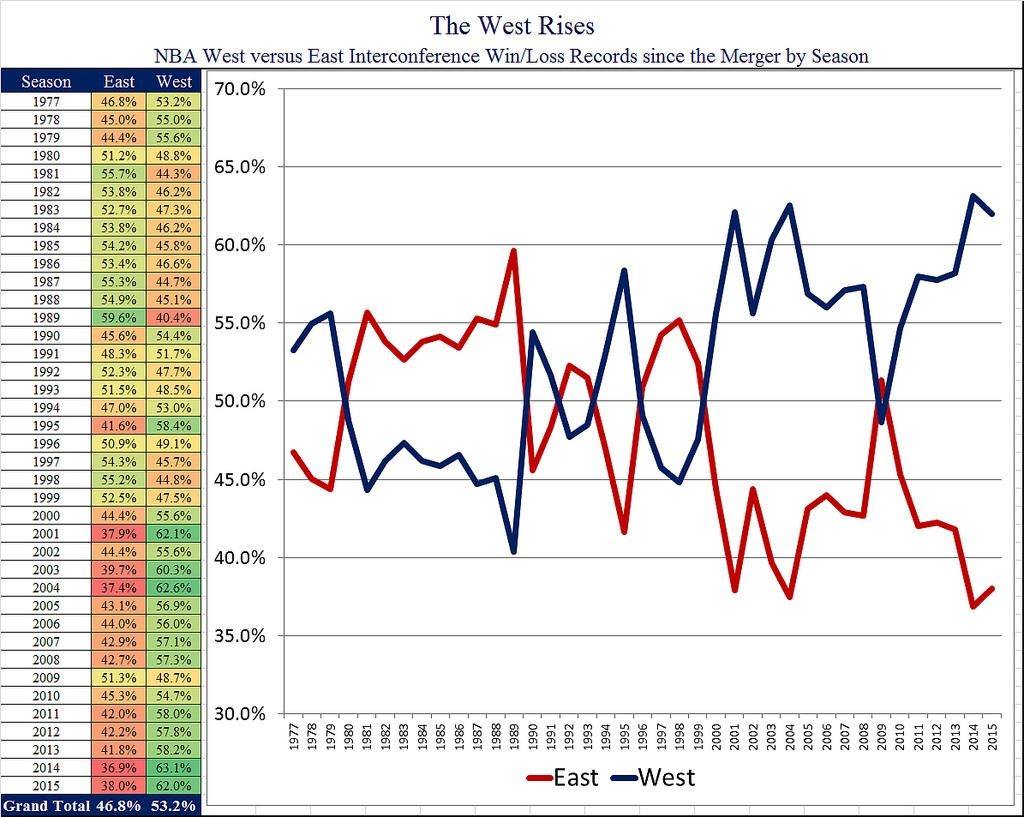 How did the current imbalance begin? It's hard to even define when it began, though this piece makes a strong effort, pointing at the late 1990s. Western teams have been successful in luring high-profile free agents like Shaquille O'Neal and Dwight Howard away from the East.

Now that it's in full swing, it is partially self-reinforcing through the draft. Here's an example.

If the draft relied only on record rather than playoff status, the Thunder would have received the #17 pick and Brooklyn the #12 or #13, depending on the tiebreaker with Utah. Instead a team that was 7 games better gets a better pick.

The bottom teams in the West similarly find it easier to tank (intentionally lose) to get better draft picks. The top two picks in the 2015 draft are held by Western teams. And the West gets yet stronger.

I think that Michael mostly nailed this, but there are a few things at hand that make basketball particularly different from other sports in this regard. All sports have periods of dominance of one league to another, but the NBA seems to have the longest periods and the most dominance.

I believe this comes from two things: the greater impact of a few players in the NBA, and the longevity of NBA careers. There may be some structural reasons, but the NBA simply has the likelihood of a bit of variance being magnified for these reasons.

Superstar (and even regular-star) NBA players remain stars for longer than any sport than baseball, and even baseball most stars start later than other sports. An NBA player of the highest talent level can expect to be at the top of his game for between 10 and 20 years. Michael Jordan's Bulls tenure lasted for 13 years (and could have played longer except for some combination of politics and possibly gambling issues), Lebron James is still arguably the best player in the game in his 12th season and undoubtedly has 3-4 more years of high performance; really the only NBA players likely to play less than 10 years are centers, and some of them manage anyway.

Compare that to NFL players (QBs might expect to start for more than a decade, but many other positions don't get anywhere close), NHL players (I guess Marian Hossa's going to play forever, but dings and age slow top players well before ten years), and even baseball players (most "top" baseball players stay there for less than a decade; a player with 8 years of dominance (say age 26 - age 33) would be close to the norm.

On top of that, an NBA team starts 5 players and each of those players often plays nearly the entire game - 36+ minutes is common for excellent players. MLB players contribute at best 1/9th of their team's opportunities, NFL players play half the game and are one of eleven on the field (though QBs would be the one exception), and NHL players nearly always play under half the game.

Put those two things together, and you have the fact that a small deviance - 60% of the stars being in the West - means the possibility for a long period of dominance for one conference. Baseball, Football, and Hockey have less of an opportunity for that over a long period of time; they'll tend to have shorter swings.

If you doubt the effect of one player to a conference's win/loss total, look at the page Michael linked, and the East vs West in the mid 90s. Guess what year the west dominated in the east? Right, that's one of the years Jordan was off playing baseball (and the other was a near tie)... take that away and you have basically the East having the same dominance from 1980-1998 as the West has now.

(Why hasn't Lebron had the same effect, always playing in the East? Basically all of the other stars are in the west, so they outweigh him. During Michael's era, the stars were much more evenly aligned.)

10
Why doesn't the MLB implement a salary cap?

12
Why don't more NBA teams use the triangle offense?
7
NBA draft picks as a team rebuilding strategy
8
Are the NBA champions called World champions? Why is that?
1
Are the NBA teams globally better in East or West conference?
2
In the NBA, why do teams spend all their money available?
4
What are the sports facilities at the Orlando Disney World?
5
Non-USA superstars in the NBA seem to be much taller on average than superstars from the USA: What exactly is the reason?
1
Why do NBA Western Conference teams play against Eastern conference during season
0
Why are Grizzlies in the playoffs and GSW are not, even though Warriors have more victories?